This issue has up in a couple of SAQs and vivas since 2000, and is an important topic to be aware of.

Specifically, the differential diagnosis of polyuria in TBI has been asked about, as well as the role of DDAVP, but these have all taken the shape of either "analyse this electrolyte panel" or "discuss the pharmacological actions". Older questions explored greater depth: Question 23 from the second paper of 2006 presented a polyuric patient and asked you to "outline the way in which you would evaluate this polyuria". Question 17 from the first paper of 2018 actually asked for a tabulated discussion of mechanism, approach and management for pulyuria post pituitary adenoma resection. Something similar might come up in the vivas. Moreover, one's practice could only benefit from more armament in the constant sodium-themed conflict against the neurosurgical specialty, who occasionally seem to have a superstitious fear of vasopressin analogues. Thus, the following topics will be discussed in some detail.

As far as sources go:

The time-poor exam candidate should abandon the abovelinked articles, and instead look to the LITFL page on polyuria and traumatic brain injury.

A suggested by the heading, these should not attract a vigorous reaction from the candidate. An old (1986) paper about post-pituitary surgery suggests that DI affects only a small minority of polyuric neurosurgical patients.

There is a list of differentials for polyuria which one may wish to think about:

This does not appear to be a real scientific term; if one uses it as a search string, one finds several pages in the top results which are all derived from Jeremy Fernando's notes from 2011. Here is a link to the original material, for reference. Unfortunately, the rest of the results are all raw untreated gibberish.

However, the phenomenon is real. Renal blood flow autoregulation is not impaired per se. Rather, the the phenomenon of pressure natriuresis is responsible. Increased renal perfusion pressure leads to the inhibition of sodium resorption, and the mechanism for this is unclear, but it appears to be a stereotypical response to hypertension.

One could get into this sort of situation if one is adjusting one's vasopressors to an arterial transducer zeroed at the level of the Cicle of Willis. In such a scenario, with a patient sitting up at 30° one's mean arterial pressure at the level of the renal artery will be something in the order of 110-120mmHg. With this, one can expect copious amounts of sodium-rich but otherwise rather dilute urine.

This phenomenon is addressed in greater detail in the apocryphal chapter regarding the physiological effects of hypothermia. In brief, the diuresis observed in hypothermic patients is probably due to a non-osmotic suppression of vasopressin synthesis which occurs at low temperatures. It appears to be readily reversed by vasopressin and its analogues.

This topic for some reason has merited an entire chapter, dedicated all to itself. In brief, this is a poorly understood disorder of natriuresis associated with neurological injury. The natriuresis tends to stimulate diuresis, and results in dehydration, but this is far from mandatory. It has been suggested that this disorder is caused by a leak of BNP ("brain" natriuretic peptide, of course!) but in fact there is very little BNP in the human brain, and something else is probably to blame. The characteristic features are natriuresis, hypovolemia and low serum osmolarity.

It would be unwise to use this space to digress on all the possible causes of nephrogenic DI.

Suffice to say that in the setting of trauma, the most common agent responsible for renal vasopressin unresponsiveness is pre-injury alcohol consumption. With normal zero-order clearance kinetics, one can expect an excretion rate of 1 standard drink every hour, which means that a man who consumed a full bottle of vodka and then immediately suffered a severe head injury will still be under its effects 24 hours later.

Both acute and permanent damage to the posterior pituitary is fairly common among traumatic brain injury patients, affecting around 20% of the patients in one reported cohort. The reported rates tend to vary quite widely. Of the reported cohorts, the majority agree that about a quarter of the patients diagnosed with DI in ICU will go on to have DI in the long term. Damage to the hypothalamus has a longer lasting effect, but damage to the posterior pituitary itself seems to only cause a transient polyuria, because the vasopressin secreted by the hypothalamus can still be available to the circulation.

Features which predispose patient to the development of DI in TBI are outlined in an excellent free article from 2013. I will summarise below:

Unlike TBI where numerous possible differentials need to be considered, diuresis following pituitary surgery is a lot less mysterious. For one, there is no question regarding the gland being interfered with. Question 17 from the first paper of 2018 was asked in a way which lends itself well to a tabulated answer. The table which follows represents distilled information from the excellent articles by Prete et al (2017) and Hensen et al (1999)

The triphasic pattern of DI in head injury

There is a stereotypical pattern to DI following severe pituitary injury. 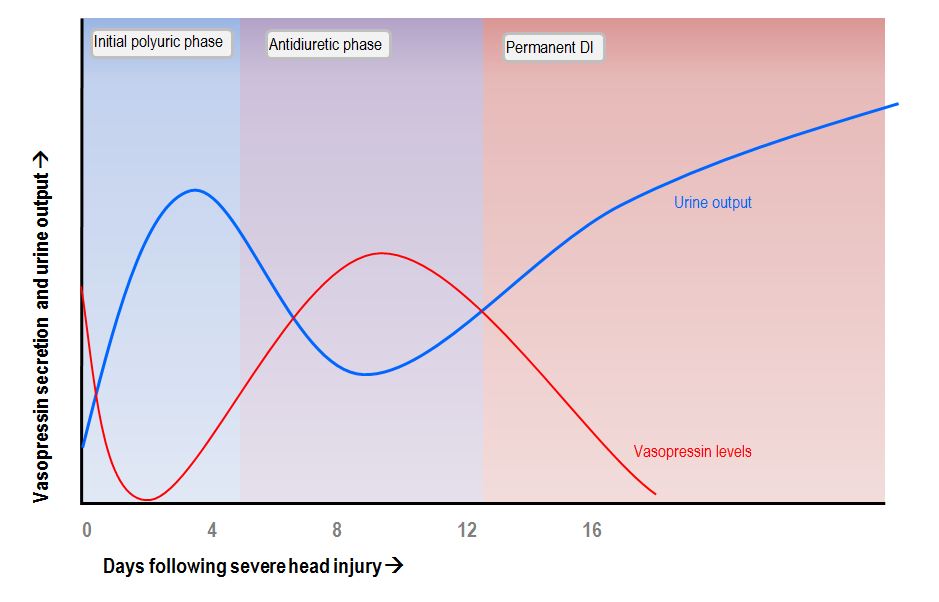 First, in the absence of vasopressin polyuria develops. This goes on for 4-5 days. After that, the decomposing pituitary tissue begins to leak its stored vasopressin into the systemic circulation, and the polyuria subsides. Because there is no regulation of this release, the normal physiological responses to changes in serum osmolality are lost. The rate of release may even be so great as to cause SIADH and hyponatremia. Ultimately, the stored vasopressin runs out, and one is left with perpetual polyuria, unless the vasopressin is replaced. Of course this sort of total loss of pituitary function is uncommon, and for most TBI patients the third phase is characterised by a gradual return to normal pituitary function.

The risk of DI during the initial stages of TBI

Generally speaking, there are only two major problems:

DI in TBI may also be damaging by increasing neuroinflammation, but this is a fairly hypothetical concept, supported by rat brain studies. Overall, polyuria in the severe TBI patient tends to be more distressing to the ICU staff than it is to the patient. Informed constantly by our attentive monitoring, we see the urine output increase and sodium progressively rise, and we fret. Not without cause; patients who develop DI early in their course have a higher mortality than those who develop DI later in their hospital course. In one study, all patients who died developed DI within the first 3 days of hospitalization. It appears to be predictive of mortality. However, there is no strong evidence that treating DI does anything to improve this increase in mortality; those patients may well have more severe brain injury overall.

The risks of DDAVP in traumatic brain injury

The management of DI early in the course of TBI is therefore potentially unhelpful. But is it harmful? Why would one not want to give  0.5μg of DDAVP?

A study of hypernatremic patients with TBI found that the use of DDAVP (but not hypernatremia) was independently associated with an increased risk of mortality; however in that study the use of DDAVP was used as a surrogate marker for the presence of DI (i.e. "if those guys used DDAVP, the patient must have had DI"). The authors observed that when this sort of "DI" was present, hypernatremia provided no additional attributable mortality. Thus, if one uses a different interpretation, one can say that DI causes the increase in mortality, and the use of DDAVP relieves this increase.

The general neurosurgical aversion to the use of DDAVP stems from historical studies of non-neurosurgical patients in whom DDAVP therapy carries a substantial risk of hyponatremia-related complications, as well as case series of patients in whom DDAVP-associated hyponatremia was rapidly corrected, resulting in brain damage. A case series is usually trotted out to support the case for DDAVP-associated cerebral oedema. It is a series of seven children from the Czech Republic, being treated with DDAVP for nocturnal enuresis - which seems somewhat extreme (how bad was this enuresis?..)

An additional potential risk lies in the mis-timing of DDAVP administration in the triphasic course of traumatic DI. You may give the drug on the day that the decaying ruins of the pituitary gland finally decide to release their cache of stored vasopressin. The superphysiological excess of antidiuretic effect will rapidly lead to hyponatremia, which could be a total disaster if more rat studies are to be believed (the rat-hating authors of that study suggest that hyponatremia should be considered as one of the secondary insults following traumatic brain injury).

Lastly, there is a largely hypothetical mechanism which associates the use of DDAVP with the worsening of cerebral oedema. In 1982, Thomas et al injected DDAVP directly into the ventricles of experimental animals, discovering that the brain water content increased (from 78.2% to 79.5%). The aquaporin-4 transmembrane protein has been implicated as being involved in this process, although it is unclear exactly how. DDAVP should block this channel, supposedly decreasing the efflux of oedema fluid from the injured brain - but studies with aquaporin-4 knockout mice hade instead demonstrated an improvement- i.e. in the absence of this channel there is actually less oedema.

So, this issue is not entirely straightforward.

So how long do I sit on this elevated sodium?

Well, it turns out that only a sodium consistently greater than 160mmol/L is independently associated with increased mortality. Of course, this is an association, which is not causation. Nobody said that the high sodium is actually killing these people. Its just that for the hypernatremic people the odds ratio of death in the ICU is ridiculously increased (OR = 29.35). Is this because of some intrinsic sodium-related effect, or is it a reflection of poor quality ICU care overall (Eg, at morning rounds that day "Nobody did bloods on this patient for 48 hours??")

That said, being severely hypernatremic is not a consequence-free experience. Potential complications could include the following:

Maggiore, Umberto, et al. "The relation between the incidence of hypernatremia and mortality in patients with severe traumatic brain injury." Critical Care 13.4 (2009): R110.

Fenske, Wiebke, and Bruno Allolio. "Current state and future perspectives in the diagnosis of diabetes insipidus: a clinical review." The Journal of Clinical Endocrinology & Metabolism 97.10 (2012): 3426-3437.