At one stage in the history of neurology and neurosurgery, subarachnoid haemorrhage scoring systems had proliferated wildly and at one stage there were apparently about 40 of them. Major criticisms of these older systems were subjective measures, retrospective methodology and poor inter-rater reliability. More recent systems (if you can call them that, from the 1980s) have been generally better received, but still there are none to describe as the "golden standard". All  feature some flaw or another.

Historically, the college have asked about SAH numerous times. However, the theme has always been "how to find vasospasm" and "how to manage vasospasm" and "what is vasospasm", etc. Question 3 from the first paper of 2018 is the first question to focus on grading systems in any great detail. Specifically, attention was drawn to the WFNS and the Fisher scores; the candidates were asked to define them and describe their limitations.

If one had to limit their reading to one article only, one could do worse than the 2005 piece by Rozen and Macdonald from Neurocritical care. The authors soberly conclude that "because of the limitations of the current grading scale data, it is unreasonable to strongly advocate universal adoption of any of the available SAH grading scales".

Here are a few. There were apparently about 40 at one stage.

This staging system came about 5 years before the Glasgow scale. It is unclear what neurosurgeons in the 60s understood by "vegetative disturbance" and "moribund appearance". Hunt and Hess themselves confessed in their introduction: “It is recognized that such classifications are arbitrary and that the margins between categories may be ill defined".

Features of this scale:

The World Federation of Neurological Surgeons grades SAH according to motor score and total GCS. Their grading scale gives us something of an idea as to what to expect in terms of survival.

Notice how in the most severe categories, it does not matter whether your motor deficit is present or not. Motor deficit really just distinguishes Grade 2 from Grade 3. This system relies on accurate GCS scoring in the absence of sedation.

Advantages of the WFNS system

Keeping in mind that this scoring system dates back to the late 1980s, some major advantages need to be acknowledged.

Limitations of the WFNS system

Another method of scoring SAH severity (with implications for vasospasm) is the Fisher scale, which was introduced in 1980.

Essentially, this scale relates the amount of blood to the risk of vasospasm. Grades 3 and 4 almost always develop it, and the other grades seem to be spared.

Advantages of the Fisher score

Limitations of the Fisher score

Answering the concern that the old Fisher scale did not adjust its predictions on the basis of thick cisternal or ventricular blood, the scale was revised to include these findings (Frontera et al, 2006):

As you can see, the main difference is the introduction of intraventricular haemorrhage. If they have any blood in their ventricles, they automatically score a 2 (whereas before they would have scored a 0, which would markedly underestimate their risk of vasospasm) 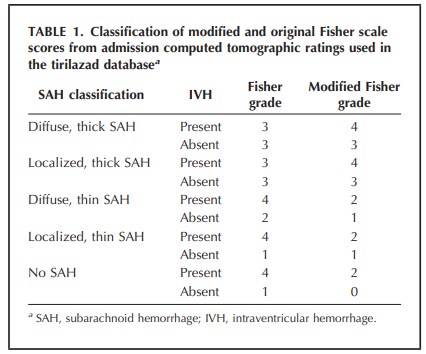 It appears that the main criticisms of this scale system is the insufficient separation of risk categories (Grade 2 and 3 have the same vasospasm incidence) and the difficulty interpreters seem to have with deciding whether SAH is thick or thin (which degrades the interrater reliability somewhat).

"Factors that were strongly associated with outcome were used to develop a comprehensive grading system", says their abstract.  Points in this system are awarded to the patient. One point each  for Hunt and Hess grade 4 or 5, Fisher grade 3 or 4, aneurysm size (greater than 10mm), age over 50 years, and (sensibly) whether or not the lesion is a "giant posterior circulation lesion" (i.e. aneurysm greater than 25mm in diameter). By adding the points, a 5-point grading system is developed.

One scale to rule them all?

Which is the best? Hard to say. It may well be that admission GCS is the single best predictor of neurological outcome.

Botterell, E. H., et al. "Hypothermia, and interruption of carotid, or carotid and vertebral circulation, in the surgical management of intracranial aneurysms." Journal of neurosurgery 13.1 (1956): 1-42.

Hunt, William E., and Robert M. Hess. "Surgical risk as related to time of intervention in the repair of intracranial aneurysms." Journal of neurosurgery 28.1 (1968): 14-20.

Rosen, David S., and R. Loch Macdonald. "Grading of subarachnoid hemorrhage: modification of the World Federation of Neurosurgical Societies scale on the basis of data for a large series of patients." Neurosurgery 54.3 (2004): 566-576.