An ideal resource for answering such a question can be found in DeWitt and Waksman's article from Toxicological reviews (2004) - they basically answer the college questions for you. The cardinal differences in β-blocker and CCB toxicological syndromes are discussed at the very end of this chapter, which otherwise mainly deals with β-blockers on their own. Additional resources should include the LITFL CCC entry, which is clear and concise.

This table is very similar to the one offered in Goldfranks' Manual of Toxicologic Emergencies. 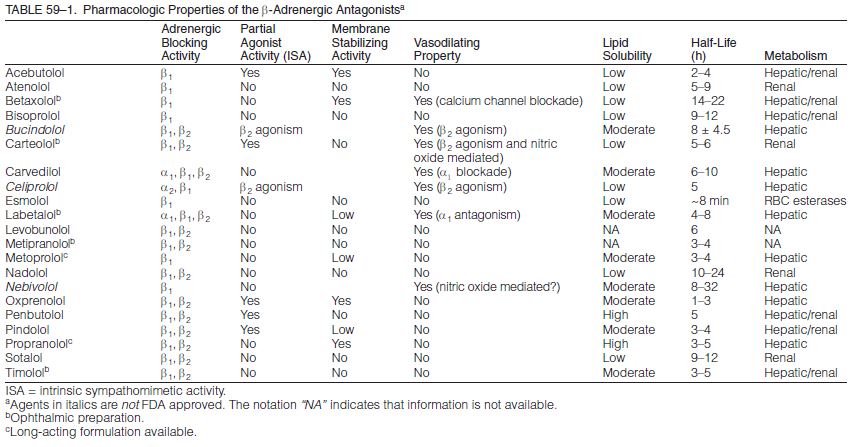 Even though one cannot call any β-blocker overdose intrinsically "safe", many drugs are relatively benign. However, a few stand out as being particularly toxic.

Most deaths from β-blocker overdose are associated with propanolol. It has nasty sodium channel blocking effects and it prolongs QRS duration; moreover it penetrates the blood brain barrier. In the brain, propanolol decreases the seizure threshold. This may seem weird, as a sodium channel blocker is supposed to act as a membrane stabiliser. However, the seizure thing is well documented: for instance, in the case series by Reith et al (1996) two thirds of the patient who took over 2g of propanolol ended up having seizures. The reason behind this increased toxicity was thought to be related to the high lipophilicity of propanolol. In comparison to less fat-loving drugs (like the water-soluble atenonol), propanolol is better able to penetrate cardiac and CNS tissues. This argument may be complete bullshit because sotalol is also hideously toxic in overdose and happens to be highly water-soluble; however experimental animal data supports the supremacy of propanolol as the more potent poison ("In toxicity tests, propranolol was 6–20 times more toxic than sotalol under different experimental conditions and in different species of animals" - Åberg et al, 1999). Other drugs with similar membrane-stabilising properties include betaxolol  oxprenolol and acebutolol, the latter being widely acknowledged as "the most toxic β-blocker".

Without being able to penetrate the blood-brain barrier, the hydrophilic sotalol is left to wreak its havok only upon the myocardium. There, its harmful effects are plentiful. Sotalol overdose frequently presents with asystole (Adlerfliegel et al, 1993). Apart from the cardiodepressant effects, it prolongs the QT interval and causes torsade de pointes (Assimes et al, 1998). The drug is a racemic mixture of two stereoisomers, of which l-sotalol is a non-selective β-receptor antagonist, whereas d-sotalol is a pure Class III antiarrhythmic with virtually no β-blocker effects. This stereoisomer adds the unique torsade-inducing toxicity to sotalol: it blocks the delayed rectiï¬er potassium current (IKr) responsible for repolarization, thereby prolonging the action potential duration and QT interval.

Toxicity is enhanced yet more by the lack of hepatic metabolism, which means that sotalol relies exclusively on renal excretion. Renal failure promotes accumulation, and this may be insidious in onset. Other drugs relying on renal clearance are atenolol bisoprolol and labetalol

Generally speaking, if the patient has had no symptoms over six hours of observation, they are unlikely to have taken a clinically significant overdose, and may be safely released from the ED. In gross overdose, receptor selectivity is lost. In addition to the above, select drugs (eg propanolol) will also cause coma and seizures. Sotalol toxicity may be delayed by up to 24 hours, as an exclusion to the six hour rule.