Mechanical ventilation for ARDS is a topic of great interest to the intensivist, for a variety of reasons, not the least of which is the tendency of the CICM examiners to ask questions about it in the Part II exam. Other conditions (pneumonia, pulmonary oedema) are much more common and occupy more ICU beds, but have commanded less examiner attention because these conditions are less sexy and discussions of these in the literature are not as animated as the discussions of ARDS ventilation. With that said, ARDS is not exactly uncommon - a 2016 incidence survey (Bellani et al) determined that about 10% of all ICU admissions are with ARDS, and of all the ventilated patients in their 50 participating countries about 25% of all patients were intubated because of ARDS. In short, it's worth knowing about.

The following past paper SAQs involve the ventilation of ARDS:

In general, the College had asked about "ventilator settings" or "ventilator strategies" or "steps to improve oxygenation".  This chapter focuses on answering such questions with a pre-chewed bolus of literature recommendations, sufficiently brief and systematic to help trainees generate an impression of confident competence among casual onlookers.

In terms of published peer-reviewed references for this, it is difficult to ignore the massive official ATS guidelines statement (Fan et al, 2017). The recommendations have been incorporated into this summary. Another excellent resource is the article by Bein et al (2016), which somehow appears to be freely available in spite of being a part of the evil Springer-Verlag empire.

Which mode of ventilation should I choose?

According to the Examiners of the College of Intensive Care Medicine, it doesn’t really matter. In Question 20 from the second paper of 2014, the college recommends one "use a mode with which one is familiar". This is a weird thing to say, particularly coming from a group of intensivists whose expertise is trusted with determining the expertise of other intensivists. Let us examine the implications of choosing different control variables for the mechanical ventilation of ARDS. 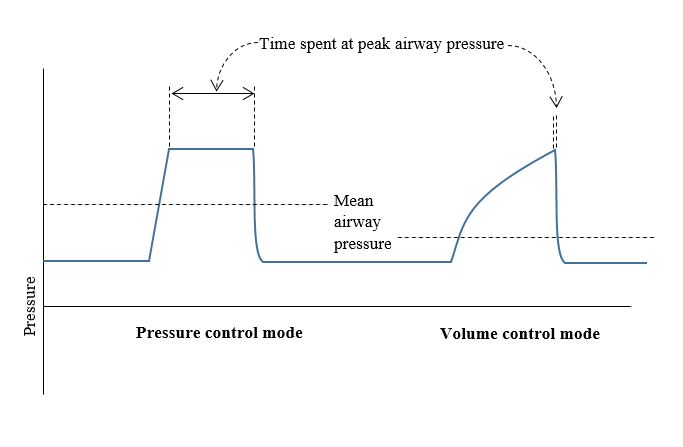 Overall, historically intensivists tend to prefer pressure control ventilation over volume control when it comes to ARDS. The rationale for this comes from the expectation that the square pressure waveform generated by the use of pressure as the control variable is probably better for oxygenation. Consider that the pressure control mode has the following advantages:

Sure, if you set up a volume control mode, you will still keep your peak airway pressure under 28-30 cmH2O, and so there shouldn't be any VILI. However, most of the inspiratory time will be spent a relatively low pressure, and there is probably going to be only a tiny fraction of end-inspiratory time during which the pressure will be maximal. In short, for any given peak airway pressure, you'll not be getting your money's worth of oxygenation.

If one were to look for some sort of definition for this often-used term, one would come up with articles like this one by Camporota & Hart (2012), which define it as:

"...the provision of mechanical ventilation with static inspiratory pressures (plateau pressure) of less than 30 cm of water and tidal volumes normalised to predicted body weight"

Specifically, those volumes would have to be small. The ARDS network group of investigators published the results of the ARMA trial in 2000, which remains among the best-known studies in ICU literature. The group randomised patients to be ventilated with either 6ml/kg or 12ml/kg tidal volumes; the mortality difference was 31% vs 40% in favour of the smaller volumes. A subsequent meta-analysis has confirmed this mortality reduction.

In this fashion, a 70kg person is ventilated with volumes of around 350-400ml, at a rate of 16 breaths per minute. The discomfort of breathing in such an unnaturally shallow way requires more sedation than would otherwise be required with conventional ventilation.

One starts at 8ml/kg of predicted body weight; over the following few hours one adjusts this down to 6ml/kg, while increasing the respiratory rate. The maximum plateau pressure is maintained around 30cmH2O, although 28cmH2O may be a more sensible limit.

Among the downsides of this strategy, the generally well tolerated respiratory acidosis is only one. Some authors have wondered whether some of the beneficial effects of lung protective ventilation may actually be the result of auto-PEEP, which develops when a higher respiratory rate is used. Others have questioned the influence of the increased sedation requirements; however these do not seem to be a constant feature- you only need deep sedation of the first day or so. Furthermore, it is probably unwise to extrapolate this strategy to patients with normal lungs.

In summary, the key issues are:

A further point is to mention that the tidal volume should be adjusted to predicted body weight, the formula for which is:

The ARDSNET website has a lookup table which for some reason uses the Imperial system.

The “open lung” is the welcoming term used to describe a state in which all available alveoli are aerated throughout the ventilatory cycle. I suppose the opposite would be “closed lung” ventilation, where the alveoli are all collapsed. Looking for a formal definition, one comes up somewhat short. The term was probably coined by Burkhart Lachmann (1992), and then popularised by Marcelo Amato (for example in his 1995 article describing what he called a "protective" strategy,  about 6 years before the ARMA trial). Lachmann apparently presented this concept as early as 1982, but not until 1992 was there even animal data to support his idea. As far as definitions go, Lachmann's is sufficiently descriptive to quote in an exam. Open lung ventilation, according to his 1992 paper, is:

"...optimal ventilator mode which produce [sic] minimal pressure swings during the ventilatory cycle and keep the lung volume equal to or just above the FRC level "

The aim of this approach is to reduce the trauma induced by constant collapse and reinflation of alveoli, the so-called “cyclic atelectasis” which is thought to be a major cause of lung injury in ARDS ventilation. The idea is, with all your alveoli recruited you'll get decent tidal volumes with some minimum of "pressure amplitude", or driving pressure - i.e. the difference between your PEEP and your inspiratory pressure setting on a pressure control mode.

There are two trials to describe and support this technique, and though both show promise, each is hobbled by problems with methodology. Amato et al (1998) got excellent positive signals in hard outcomes (mortality down from 71% to 38%) but most people would point out that this was an unusually high institutional mortality from ARDS (should be around 45% for even severe ARDS). On top of that, the trial suffered from a  tendency to enrol Brazilian patients with leptospirosis, and the tendency to ventilate the control group with high volumes. A more recent trial by Villar et al (2006) demonstrated more realistic-sounding mortality benefits (53% vs 32%, in favour of opening lungs). 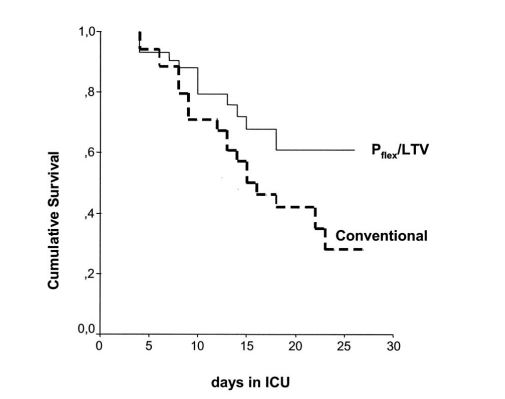 The use of open lung ventilation rests in setting the PEEP around 2 cm H2O above the “critical opening pressure”, the PEEP at which the majority of alveoli remain inflated at end expiration. The FRC is therefore raised above the critical closing volume. The problem with this is obviously the finding of that critical opening pressure (or volume). ARDS is a heterogeneous condition, and for any given PEEP there will always be lung units which are overdistended, and others which are collapsing on expiration.

The art and science of determining the optimal PEEP for open lung ventilation is discussed elsewhere. In brief, one can use the following strategies:

How high, you ask? There are three trials to examine: ALVEOLI, LOVS and EXPRESS. The findings have been compiled into a nice meta-analysis. The high-PEEP groups averaged around 12-15 cmH2O; the low-PEEP groups had about 8-9 cmH2O. Though overall there was no in-hospital mortality benefit, the authors were forced to conclude that there seems to be a small (5%) mortality benefit for the most severe groups, i.e. those with a PaO2/FiO2 ratio less than 200.

In short, the more severe your ARDS gets, the higher a PEEP you ought to use, up to a possible limit of around 15-20. Though the ARDSNet protocol goes all the way up to 24, one might consider stopping short of this value (indeed many ventilators stop at 20 cmH2O).

Barotrauma occurs when alveoli are stretched beyond their breaking point, and in ARDS this may occur due to the pressures required to generate even low tidal volumes. The 2017 ATS guidelines recommend that plateau pressure be limited to 30 cm H2O, and ideally as low as 28 cm H2O.

If lung compliance appears to be poor, one could also consider decreasing the I:E ratio (eg. to 1:1.5, 1:1 or even 2:1). However one does this with the knowledge that the benefit seems to be largely theoretical and manipulating the I :E ratio does not seem to improve survival, even though it may improve oxygenation.

Recruitment manoeuvres and their attendant complications are discussed in a separate chapter. Typically, one performs one of these by applying a high pressure (say, 40 cmH2O) for a short time (say, 40 seconds or so). One is immediately rewarded with hypotension, and possibly also pneumothorax. Oxygen saturation also drops- because the additional positive pressure is transmitted to the pulmonary arteries, suddenly doubling the pulmonary arterial pressure and causing a transient, frightening episode of right heart failure.

Does this strategy improve survival? Probably not, according to this Cochrane review. In fact, in the ART trial (Cavalcanti et al, 2017) they probably caused harm.  But, they can improve oxygenation temporarily. One can see the benefit of recruitment manoeuvres in patients who have accidentally become disconnected from the ventilator. The 2017 ATS guidelines were published in May of 20117, whereas the ART trial came out in September that year, and so the ATS guidelines still recommend recruitment manoeuvres whereas the rest of the world probably does not. In fact, in their answer to Question 8 from the first paper of 2018 the college remarked that if any trainee who confesses to the routine use of recruitment manouvres, "they were should be marked down" by the examiners.

In our pursuit for control over ventilation physiology, we often grope around for the cisatracurium ampoule. The switching off of muscles has several benefits in ARDS. Firstly, the contribution of chest wall compliance to lung compliance is removed. One may find that ventilation at a desirably low plateau pressure is only possible while the patient is paralysed. Secondly, the whole-body oxygen demand is decreased (as there are no contracting muscles at work) and so oxygenation of the still-active organs is improved. Overall, this strategy (one study found)  leads to a sustained improvement in oxygenation. Of course, one cannot treat one’s muscle fibres as mere obstructive oxygen thieves, hanging parasitically from one’s skeleton. Sustained neuromuscular blockade has its disadvantages.

Watling, Sharon M., and Joseph F. Dasta. "Prolonged paralysis in intensive care unit patients after the use of neuromuscular blocking agents: a review of the literature." Critical care medicine 22.5 (1994): 884-893.