APRV has never come up in the CICM exams, and is unlikely to ever appear. The reason for this is that APRV is not a well-accepted rescue technique, nor widely practised, nor especially well-researched; and so it would be inappropriate to include something like that in the exams. You can't claim that a question on APRV should be able to fail or pass a future intensivist on the grounds that this is an essential part of their core curriculum. Still, it is used around the world as a rescue therapy for the most severe ARDS, and so it seems it should form a part of the intensivist' toolbox, as to exclude it on the basis of there being no evidence would also exclude a vast swath of other ventilation strategies and adjuncts (hello, heliox and inhaled prostacyclin).

For the reader with a few spare minutes, the amazingly detailed paper by Andrews et al (2022) is the strongest and most coherent recent piece on APRV, and should be essential reading for anyone preparing to defend their use of APRV in a clinical environment full of sceptics. Excellent resources from PulmCrit and EMCrit are also available, including peer-reviewed original works by erudite contributors. The time-poor candidate should skip directly to the pros and cons section of this LITFL summary, and read no further.

The openmost of the open lungs

Working on the premise that driving pressure (the change in pressure between PEEP and inspiratory pressure) does all the damage in ARDS by means of cyclic atelectasis, one might come to the conclusion that breaths in general are harmful, and that tidal breathing in general should be abolished. Pressure should be constant and high so that all the alveoli are maximally recruited and none collapse at any stage during the respiratory cycle because there is no cycle. For the open lung enthusiast, the ideal ventilator waveform is this: 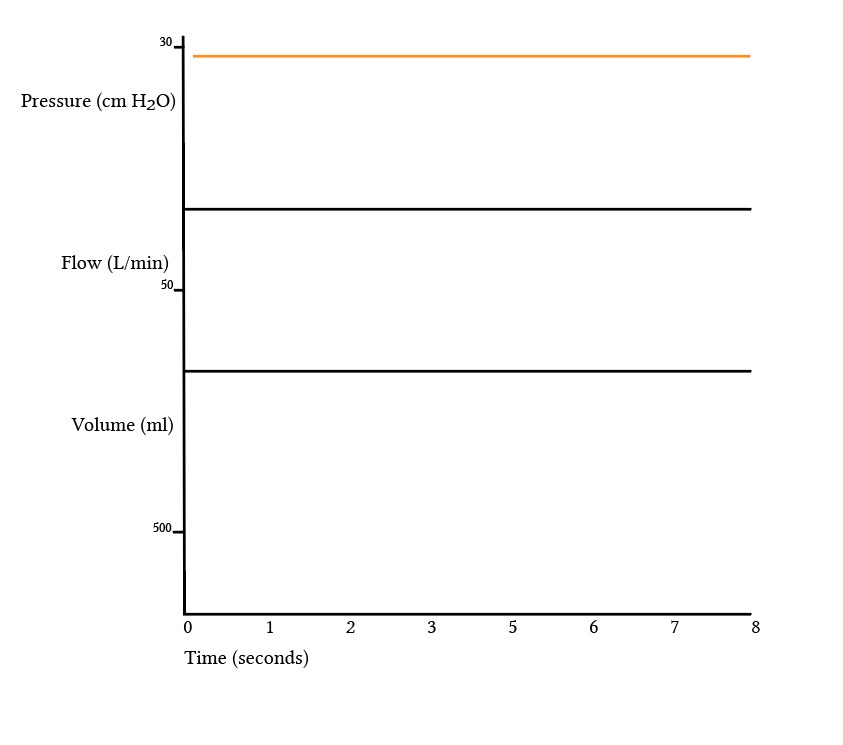 Now, most reasonable people would agree that this is in fact apnoea, and that some kind of ventilation needs to still occur in order for gas exchange to take place (as CO2 clearance with this model would obviously be suboptimal). The other constant-pressure-non-breathing mode (high frequency oscillation) achieves this by vibrating the gas column inside the lung, encouraging some gas mixing and therefore the clearance of CO2: 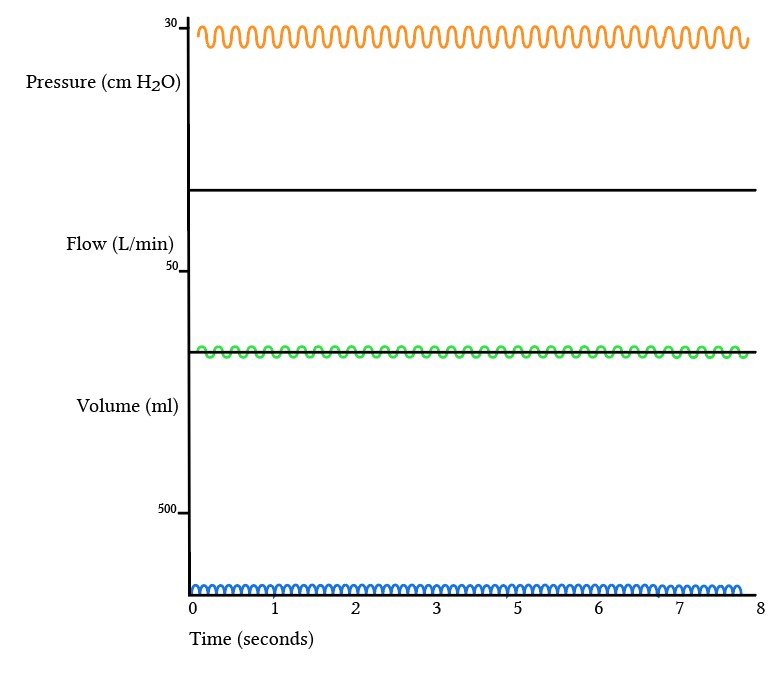 However, we can all agree that this mode is quite dead. Most oscillator hardware around the world now lies dormant under coats of dust. The reason for this is probably the failure of this mode to protect the patient from VILI by increasing the power of ventilation (i.e. imparting too much energy to lung tissue) and by being so difficult to tolerate that heavyhanded sedation and paralysis were required, making more it difficult to recover from critical illness. These factors and others have conspired to make HFOV look really bad in clinical trials, such that OSCAR showed no benefit and OSCILLATE was stopped early because of harm. Surely, one might say, there must be some mode that walks a line of compromise between the need to sustain a high mean airway pressure while allowing some CO2 removal to take place, in some patient-acceptable way that requires less sedation?

Yes, colleagues, that mode is APRV. 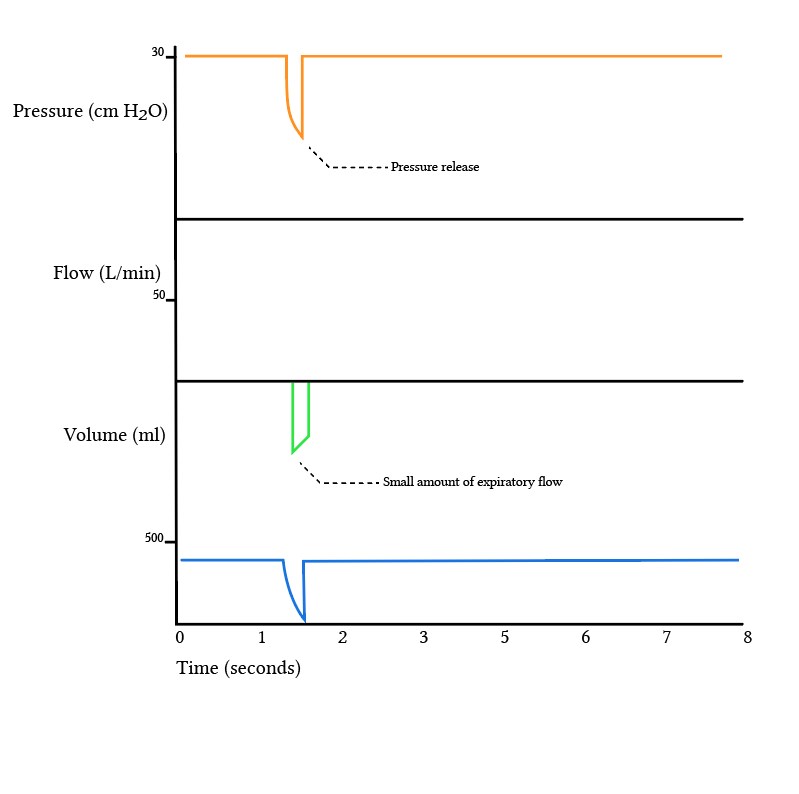 Observe: the mean airway pressure is constant, fixed at a safe value, and lung-pleasingly high. At the same time an occasional pressure release occurs, allowing a small amount of gas to escape from the patient, permitting the clearance of CO2. Moreover, all this happens without any violent lung-bashing oscillation, which means sedation can be weaned and even more CO2 clearance could occur because the patient is permitted to take breaths throughout the period of high pressure:

Sounds brilliant. So thought Stock et al (1987), who first described this idea and demonstrated its effects using an animal model. That original article was light on praise, in the sense that the authors did not tout the advantages of this method as much as they could have, but subsequent works have filled in the blanks.

They are said to be numerous:

A practical approach to APRV

There are four main variables that need to be adjusted, which are sufficiently different from the variables used to control conventional ventilation that it would be valuable to go through them in some detail.

Or, in picture form, in case that somehow helps: 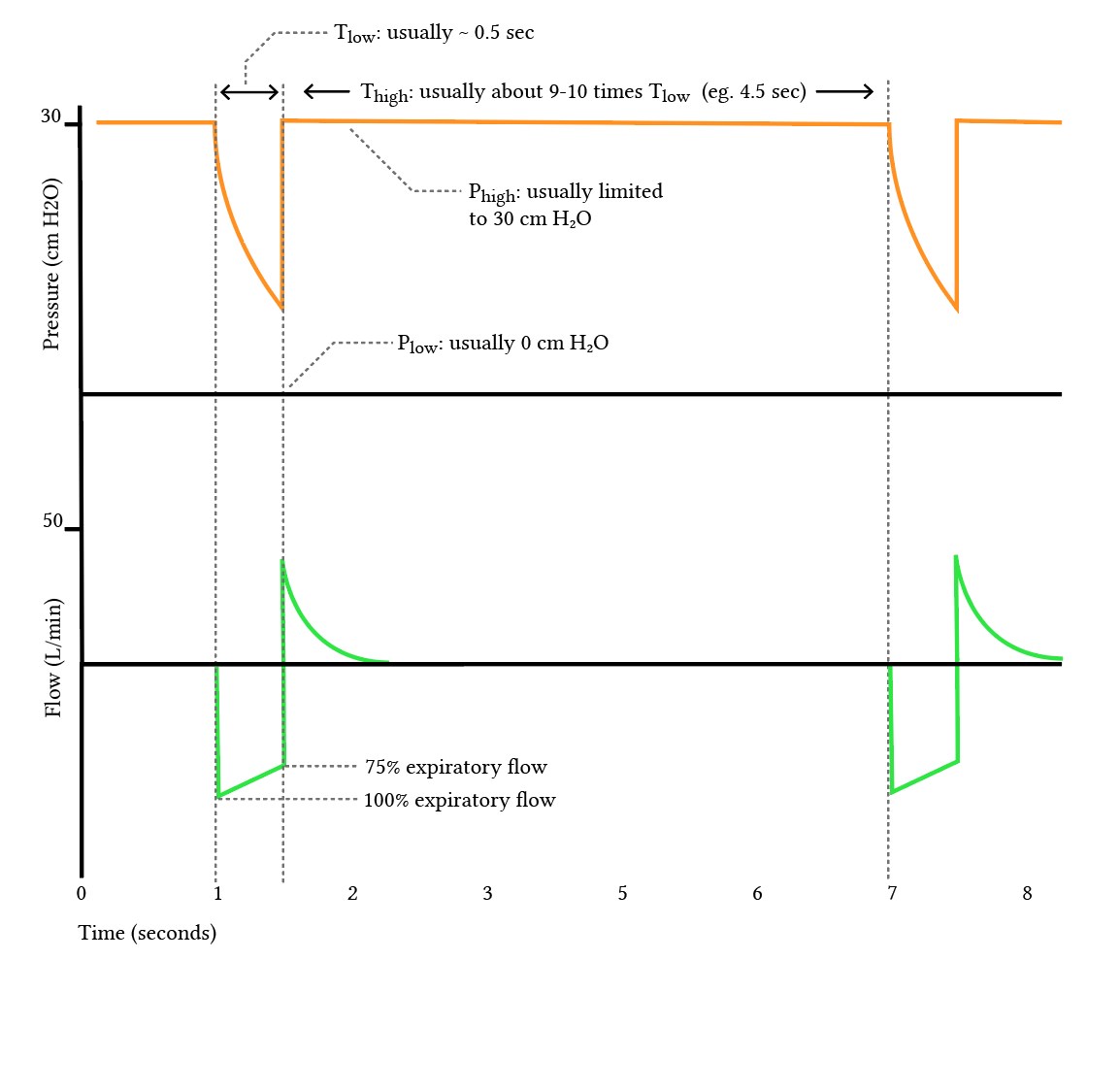 Tlow is the most important setting

Because it determines the main factor that could make or break the APRV strategy, which is whether the patient will derecruit or not. When starting the patient on APRV, this setting is usually titrated to minimise derecruitment. It is usually very short: a long expiratory time would allow derecruitment to occur and would lose a lot of the desirable autoPEEP that keeps the alveoli open. The starting setting could be 0.3-0.5 seconds, depending on how long it takes to get to 75% of peak expiratory flow.

Why 75%? This is not an arbitrary number. It is chosen as a compromise between satisfactory gas release and the potential for alveolar collapse. It appears we have been doing this for longer than we have had solid data to support it. When most people from the noughties quoted this specific percentage, their reference seems to be a 2005 article by Nader Habashi, whose recommendation for Tlow was mainly based on porcine models of acute lung injury by Markstaller et al (2001) and Neumann et al (1998). These investigators observed the changes in alveolar aeration by performing high resolution CT scans of ventilated animals in varying stages of ARDS, and their data suggested that derecruitment occured over an average timeframe of around 0.6-0.8 seconds, but neither had looked at expiratory flow in any sort of detail. Habashi's expiratory flow rate suggestion (to aim for 50-75% of peak expiratory flow) seems to have come from Guttmann et al (1995) who measured the relationship of flow to the change in expiratory volumes in ARDS patients.  Modern papers and resources instead reproduce the images and data from Kollisch-Singule et al (2016 and 2014) who looked at alveolar recruitment along a range of PEFR values and determined the optimal PEFR percentage by alveolar microscopy. When peak expiratory flow was limited to 75%, the difference between inspiratory and expiratory alveolar volumes was only about 10%, the most eloquent support of this specific strategy.

So: Tlow determines whether your lung-protective APRV strategy is actually lung-protective, which will determine its success or failure in the long term. It may be necessary to fiddle with this variable as the patient's respiratory physiology changes, i.e. where the time constants of the lung units change and the expiratory flow rate increases or decreases. As a broad generalisation:

This is the pressure drop during the pressure release breath. It is difficult to judge what the best setting here should be, but most people would agree that this should be minimal, and ideally either zero, or close to zero (eg. 5 cm H2O in Zhou et al, 2017). The objective is to provide the largest gradient for expiratory flow, so that the maximum amount of CO2-rich gas can take advantage of this precious short opportunity for expiration. Though one might have set a Plow of zero, practically that pressure is not achieved in the circuit because expiratory flow maintains some positive pressure in the airway, and the actual "PEEP" is in fact slightly higher.  That relationship is well demonstrated in these excellent images of APRV captured in the wild by Deranged Physiology contributor Dr George Zhou, a different Zhou to the one who published the trial: 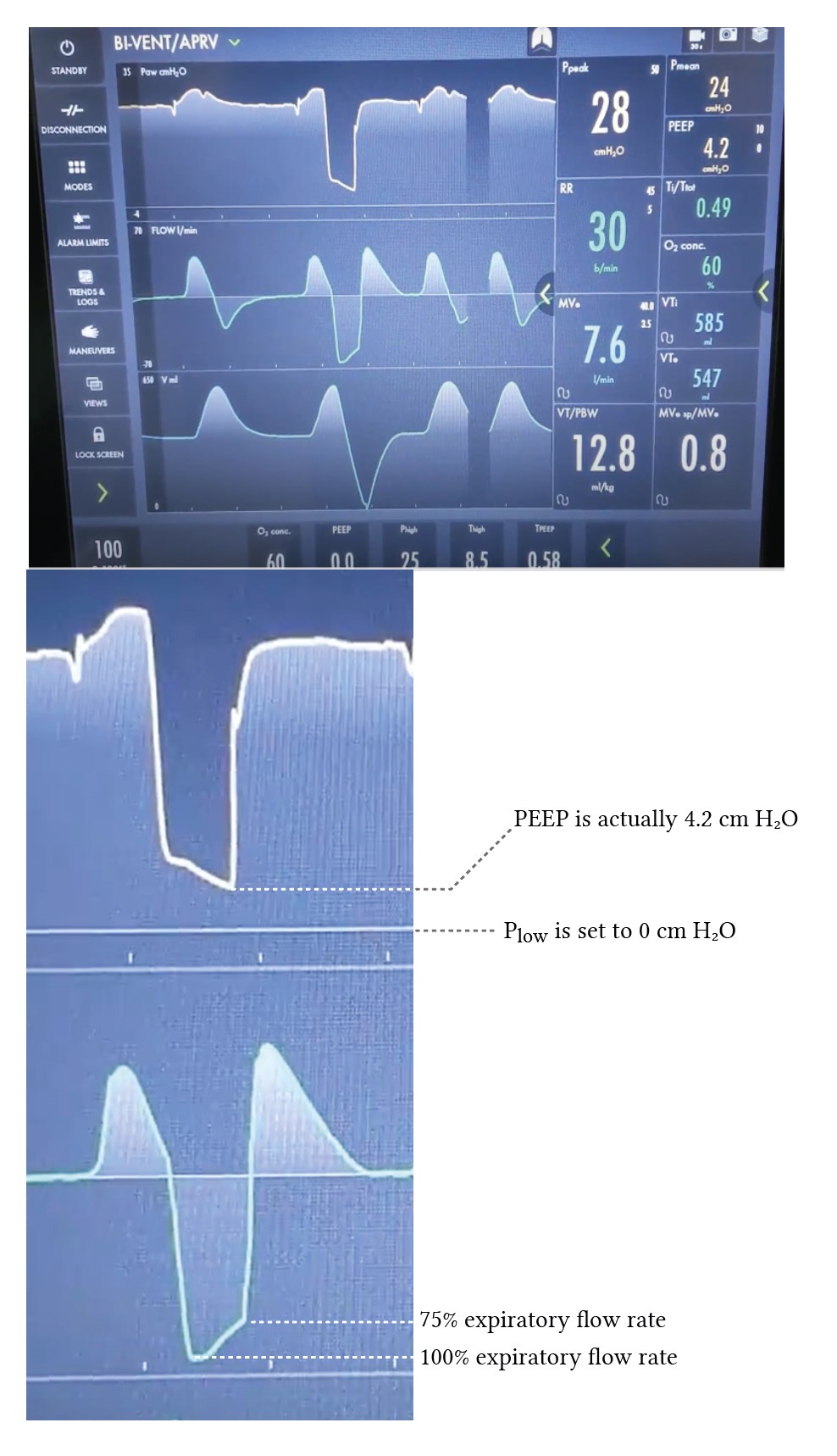 How much volume could you possible exhale during this split second? A substantial amount. From the in vivo ventilator recordings above we can see that the peak expiratory flow was close to 70L/min. If we crudely approximate the mean expiratory flow rate to be closer to 50L/min, that gives us an expired volume of around 416 ml during that half-second pressure release, which is close enough to a lung-protective volume for a 70kg patient. With twelve such releases over a minute, one could achieve a respectable minute volume of approximately 5L - plus whatever else happens via spontaneous breaths.

On occasion, it becomes necessary to adjust the Plow, particularly where hypoxia is a major problem:

And also the oxygenation, as this is the sustained pressure that recruits the alveoli. And the driving pressure for the release breaths (it's not all Plow , it takes two to gradient).  The Phigh should be set to something close to the patient's peak inspiratory pressure while on a conventional pressure-controlled mode, and ideally below 30 cmH2O. This means that at the initiation of APRV this variable is almost always set to a high value, something like 28 cmH2O, because the patient has severe ARDS and their plateau pressure is inevitably high. It should not be set much higher than that, as this is the safe maximum above which lungs tend to get damaged (with the exception of the morbidly obese patient). As the patient improves Phigh should be slowly reduced.

Thigh determines much of the CO2 clearance

CO2 clearance is also controlled by the amount of expiratory flow afforded by the Plow and by the duration of that flow (i.e. the Tlow). Unfortunately the first of those variables is usually fixed at zero, and the other one is too important to mess with (because it influences the oxygenation and lung-protectiveness of the overall strategy). This means that Thigh ends up being the remaining variable you can adjust to increase the minute volume.

A normal strategy when starting APRV is to set the Thigh somewhere around 9 times longer than the Tlow, i.e. a 9:1 I:E ratio (for example, for a Tlow of 0.5 seconds, the Thigh would be 4.5 seconds, with a total breath cycle time of 5 seconds). That gives twelve cycles per minute, and usually achieves a minute volume that is at least not worse than those seen in conventional ventilation for the same patient. If the result produces a high CO2, the Thigh can be reduced to give more breaths per minute, thereby generating a larger minute volume.

Thigh is also the variable used to wean the patient once they start getting better. This is generally described as the "drop and stretch" approach, where the Thigh is gradually increased, and the Phigh is gradually decreased, with the patient breathing spontaneously through the whole process, so the mode slowly and surely transitions to CPAP.

With this mode overall being the province of expert opinion rather than evidence, it is not surprising that everyone has their own recipe for the weaning process. Authorities such as Josh Farkas and Emily Parent from EMCrit suggest to drop the Phigh by 2cm H2O at every increment, and to prolong the Thigh by 0.5-2 seconds, leaving the other variables basically untouched. This should produce a situation where the patient, awake and comfortable, is breathing spontaneously on CPAP with a PEEP of whatever the last Phigh was (Josh suggests 15-20), and this is interrupted twice every minute by an increasingly irrelevant release breath. From here it is not a huge leap to conventional ventilation or even extubation.

Andrews, Penny, et al. "Myths and Misconceptions of Airway Pressure Release Ventilation: Getting Past the Noise and on to the Signal." Frontiers in Physiology 13 (2022): 928562.