Recruitment manoeuvres have come up at least once in the CICM Part II exam, as a "critically evaluate" question (Question 8 from the first paper of 2018). Though the college question and model answer asks about "maneuvers", the discussion will refer to them as "manoeuvres" as does the majority of the English-speaking world. This question breaks the trend of the normal 18-month lag between something happening in the literature and it being asked about in the Fellowship paper; though recruitment manoeuvres have existed since time immemorial, the ART (Alveolar Recruitment Trial) study was only published in October 2017, a mere five months prior to the written paper. The PHARLAP trial was also mentioned, which had ceased recruitment in view of ART results.

The official college stance on this matter is that recruitment manoeuvres are harmful. If the candidate advocated a routine use of this strategy in their answer, "they were should be marked down" by the examiners. This position is largely due to the findings by ART investigators, that mortality in ARDS is increased by recruitment manoeuvres. Excellent reviews and discussions of this reaction are carried out by Villar et al (2017) and Calvalcanti et al (2018). For the trainee short on time, these articles cover the topic to a satisfactory extent. Rocco et al (2010) go into some detail regarding the effects of recruitment manoeuvres and their pros and cons.

There should probably be some sort of definition for this term, and when anybody hears "recruitment manoeuvre" they usually have some image of what to expect, but nobody is able to pin down exactly what it means. Without a strict definition apart from the literal meaning of the words, one might describe prone position ventilation as a recruitment manoeuvre because it is "a cleverly planned action that is intended to get an advantage" which achieves the opening of collapsed alveoli. The Medical Dictionary defines a recruitment manoeuvre as "any technique in which sustained high airway pressures are applied to the patent airway in order to diminish collapse of alveoli during mechanical ventilation", which is also somewhat vague and could describe just abount anything that happens during positive pressure ventilation. The definition in the official college answer is even worse ("ventilator manipulations to improve oxygenation in moderate to severe ARDS").

In order to be able to write an introductory statement for a "critically evaluate" question, there needs to a satisfactory definition. A good option is the definition accepted by Hodgson et al (2016) for their Cochrane review of recruitment manoeuvres:

"We defined a recruitment manoeuvre as any technique that transiently increased alveolar pressure above normal tidal ventilation (which may have included an increase in any pressure, such as plateau, peak or end-expiratory pressure) and sustained that pressure beyond the normal time."

This definition has the added credibility of coming from the same group of authors who subsequently tried running the  PHARLAP trial (though recruitment was stopped in November, some pun intended).

Rationale for the use of recruitment manoeuvres

The following techniques have been suggested (this is plagiarised directly and shamelessly from Table 1 in the 2016 Hodgson review): 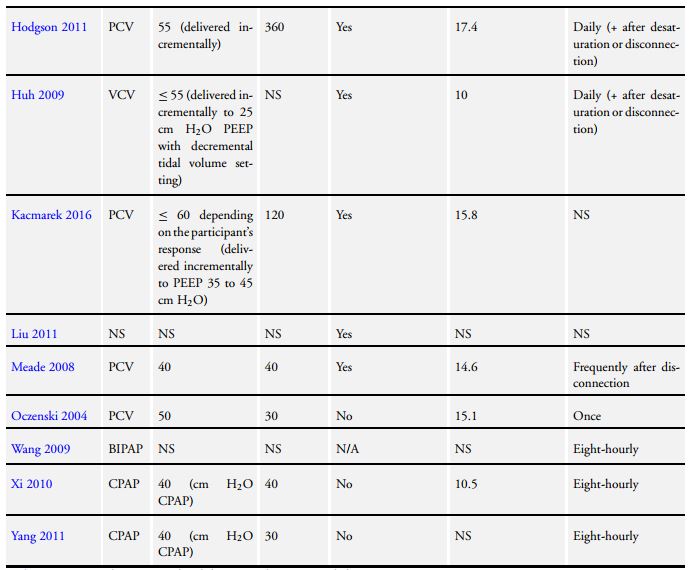 Depending on how much pressure you use and for how long, some, all or none of these complications may manifest

Evidence for and against recruitment manoeuvres