In the CICM Part II, questions about PE are frequent. Usually, they ask about the acute management of a haemodynamically unstable patient. The examiners seem to have a particular interest in thrombolysis. PE is represented in the following past paper questions:

Question 13.2 from the second paper of 2013 asked about the predisposing factors for PE, but has otherwise somehow ended up in the haematology section (probably because the first half of it was about heparin resistance).

The best references for answering such SAQs are probably the 2014 ESC guidelines and 2012 ACCP Guidelines. More recent evidence is discussed in review articles such as Barco & Konstantinides (2018), but this high-quality stuff is kept under lock and key by the greedy fat cats at Springer-Verlag. The freegan reader is instead directed to meta-analysis or review publications such as Jimenez et al (2018) or Sista et al (2017). The latter is a particularly good summary of the existing guidelines and would be easy to recommend as the best last-minute revision resource for the exam candidate.

Classification of PE occurs on clinical grounds and is necessary to determine the course of management. There are two main systems: the American way (AHA guidelines), and the European way (ESC guidelines). The AHA classify their PEs according to "massiveness", i.e. massive v.s sub-massive and "low risk", on the basis of haemodynamic stability TTE findings and cardiac enzymes.

This system has the advantage that the massive PE patients are easily identified (i.e. they look like they are about to die). The ESC instead use a scoring system which incorporates multiple variables (totally different to the AHA) in order to risk-stratify PE patients. Their scales are the Pulmonary Embolism Severity Index (PESI) or the simplified sPESI score. The table below which summarises these scales comes from Sista et al (2017); in turn, they got their data from Carrier et al (2009) and Jimenez et al (2010). 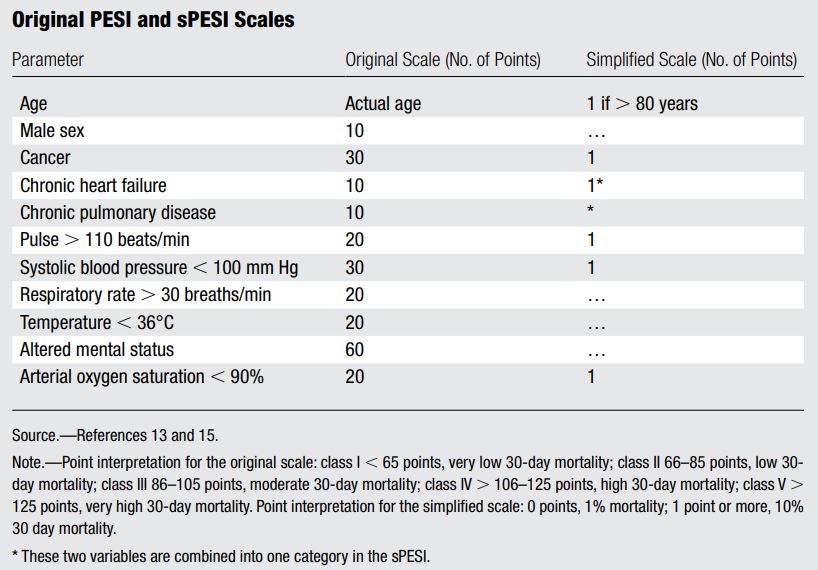 None of these scales incorporates anything about clot burden into their risk stratification. For example, the term "saddle" is often used to describe pulmonary emboli which straddle the bifurcation of the pulmonary trunk. According to Sista et al, having one of these probably has some influence on mortality, irrespective of the clinical features.

There is a fine article discussing the predisposing factors for PE.

They can be combined into a big complicated table.

In Question 2 from the first  paper of 2014, the college wanted their candidates to discuss TTE, CTPA, troponin and D-dimers in the diagnosis of PE. The examiners complained that "candidates did not answer the question as asked", which is an odd comment, given that the question was worded vaguely ("Briefly outline the role of each of the following"). It was not a "compare and contrast" question, which might lead one to conclude that many candidates ended up comparing and contrasting the diagnostic tests in a tabulated manner (that's what we robotically do when posed with a question like this). However, with that said, the college answer to this question discusses the advantages and disadvantages of these investigations. So, here is a "compare and contrast" sort of table, which incorporates both the model college answer and the 2014 ESC guidelines.

This has come up in Question 30.1 from the first paper of 2019. In essence, there are a few main features, which can be broadly summarised as "right heart strain". When Kurt et al (2001) tried to put together a diagnostic scoring system for PE, they landed on the following patterns (with their scores in parentheses):

This has come up in Question 28 from the first paper of 2020. The college wanted a definition, for 30% of the marks. The terms are actually interchangeable (Rali & Criner, 2018);  "submassive" appears to be an AHA classification, whereas "intermediate risk" is from the ACCP, but basically both involve the same features:

This has come up in Question 5 from the second paper of 2012 and Question 16 from the first paper of 2015, but generally speaking, it comes up in all the PE questions. It therefore requires some time spent upon it. The most important references for this are the 2014 ESC guidelines, 2019 ESC guidelines and 2012 ACCP Guidelines.

First, a few words about the contraindications:

PE, in general, is managed with anticoagulation alone. In addition to this, clot burden may be decreased by either systemic thrombolysis, catheter-directed thrombolysis, clot fragmentation or surgical embolectomy. The rationale for this is the improvement of pulmonary blood flow, and thus improved haemodynamic performance of the systemic circulation. A long-term benefit of thrombolysis is the prevention of severe pulmonary hypertension which inevitably develops in the wake of large-scale pulmonary emboli.

Use of thrombolysis in PE:

Evidence for benefits of systemic thrombolysis in massive PE

As the college has mentioned, the evidence for this practice is dodgy. The first randomised trial for this thrombolysis in massive PE comes from 1995, and was performed in a group of only 8 patients. All 4 patients receiving thrombolysis had survived without pulmonary hypertension at 2 years follow-up; whereas all the heparin-treated patients had died.

More evidence was gradually accumulated in support of this technique. Ten years later, thrombolysis is seen as a mandatory first-line step in the treatment of massive PE. It appears to reduce mortality by 55% according to a 2004 meta-analysis (including data from 748 patients). This meta-analysis (Wan et al, 2004) contained a small sub-group (n = 154) of haemodynamically unstable PE patients, and within this small subgroup thrombolytic therapy reduced the risk of their composite endpoint of death and recurrent PE (from 19% to 9%). On the basis of this, all current guidelines seem to recommend thrombolysis for haemodynamically unstable massive PE.

Evidence of risk of thrombolysis in massive PE

Why not thrombolyse everybody? Well:

Evidence for benefits in the sub-massive group:

Evidence for risks from thrombolysis in the sub-massive group

Surgical embolectomy as an alternative

Surgical embolectomy is a possibility, but good outcomes are only seen when a strong and organised purpose-built team is looking after the process, rather than some ad-hoc on-call cardiothoracic surgeon. Furthermore, the patients need to be carefully selected, and the sort of patient most in need of embolectomy are also the patients least likely to be selected for surgery (i.e. they are in florid cardiogenic shock, or worse yet they failed thrombolysis and are now full of alteplase). Apparently, in this enlightened age, the rate of survival after surgical embolectomy is 85% at 1 month.

For the purposes of answering questions in the final CICM exam, thrombolysis is an important and potentially life-saving step in the management of massive PE. If the patient does not meet criteria for thrombolysis, urgent percutaneous or open surgical embolectomy should be considered. The trainee who wishes to regurgitate this material may be well served by a visual mnemonic aid such as this "PE algorithm for Weill Cornell Medical College PE Advanced Care Team" from Sista et al 92017), which is based on the AHA risk stratification algorithm (Jaff et al, 2011). 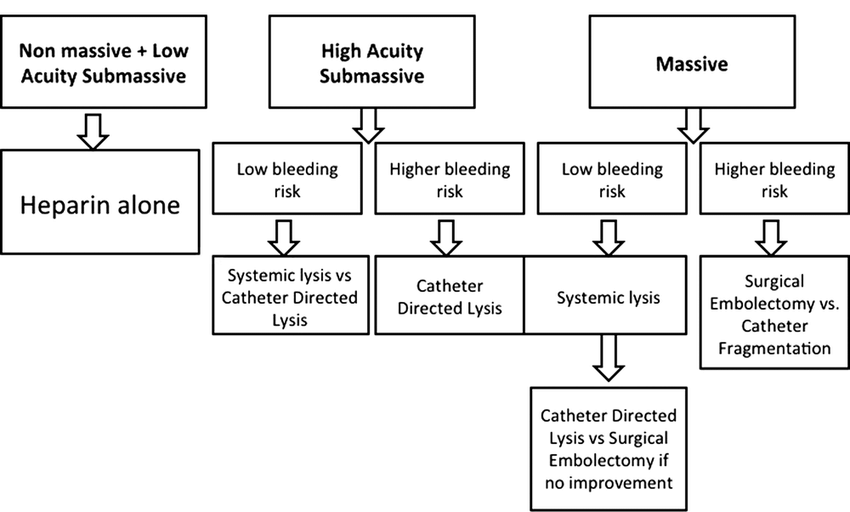 A comparison of management options for massive PE

Question 5 from the second paper of 2020 asked for a comparison of advantages and disadvantages of thrombolysis, catheter directed clot removal and surgical embolectomy specifically for the management of massive PE. Things which are accurate for all of the mentioned techniques were not listed, i.e. "decreases progression to pulmonary hypertension" is the beneficial effect of any management option here.

The single best resource for this was actually the 2019 ESC statement, especially the section on repefusion treatment (p.566)

Wan, Susan, et al. "Thrombolysis compared with heparin for the initial treatment of pulmonary embolism a meta-analysis of the randomized controlled trials." Circulation 110.6 (2004): 744-749.