Mechanical ventilation for pneumonia has never come up in the CICM Fellowship Exam, though this condition is sufficiently ubiquitous in the ICU that one can step into any unit and reasonably expect to find one. The examiners appear to be more interested in hot sexy topics like ARDS and severe status asthmaticus. However, this may not be for long. At some stage, a pneumonia question will arise, and the trainees will be expected to suggest some ventilator settings and other strategies for it.

Respiratory compromise due to pneumonia

The changes in lung mechanics due to pneumonia can be summarised as "everything is worse":

High flow nasal oxygen contributes a controllable concentration of warm humidified oxygen at some sort of uncontrollable pressure. The generic benefits of this strategy are well discussed elsewhere. How does it help in pneumonia, and what’s the evidence?

The largest and most methodologically awesome study of this specific thing was the FLORALI trial (Frat et al, 2015). The investigators’ patient group had unilateral infiltrates in 21% of cases, and were diagnosed with “pneumonia” (82%). It was essentially a study of pneumonia and high flow nasal prongs, sufficiently so that the Bottom Line complained about the poor generalisability of their findings to other sorts of ARDSish hypoxic respiratory failure. The main outcomes to look at were intubation rates 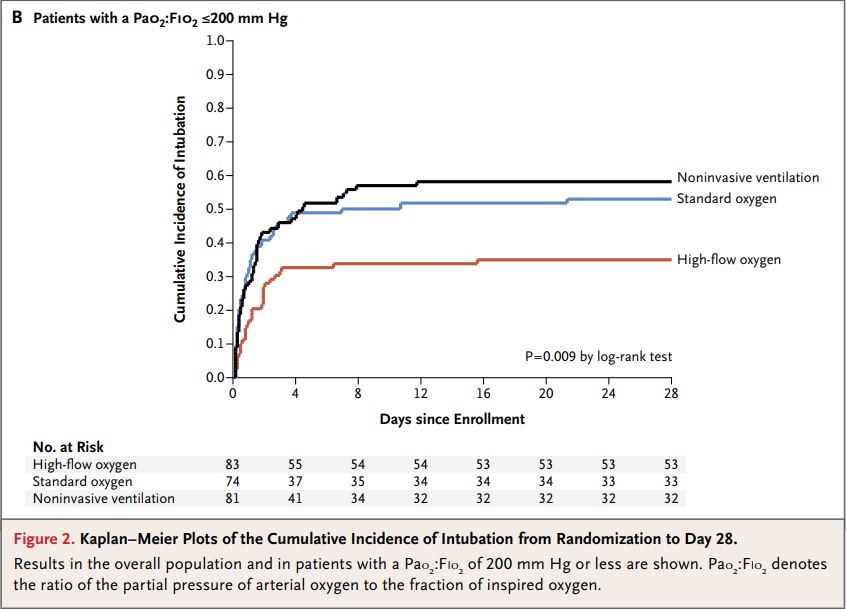 So, in patients who have mainly pneumonia, HFNP had a statistically significant impact on intubation rates, which decreased from 44% (and 50% with NIV) to just 38%. HFNP also improved the 90 day mortality from 72-77% to 93%. The authors speculated that the improved mortality was mainly due to the lower intubation rate among severely hypoxic patients (those with P\F ratio worse than 200). As will be discussed below, intubation for these people is associated with a much higher mortality for whatever reason, and so it is theorised that HFNP keep mortality low by shifting this population into the lower risk category of spontaneously ventilated patients. 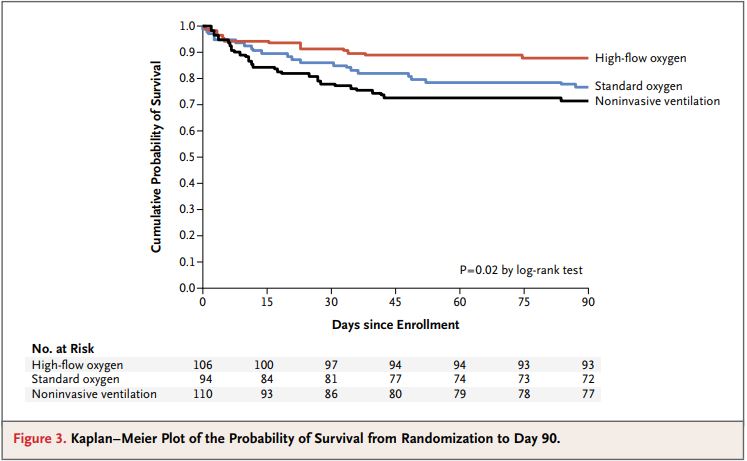 Additionally, the feeble PEEP effect might paradoxically be an advantage, by preventing pressure-related hyperinflation and barotrauma which might be taking place in patients managed with invasive ventilation and NIV. It could also be speculated that NIV and conventional oxygen both have similar counterproductive effects on the clearance of secretions

So, how do you know the high flow is failing? Well. Deteriorating arterial blood gases in the face of increasing FiO2 and high respiratory rate will generally be your guide. There are various clever indices in the literature. For instance,  Roca et al (2016) were able to calculate an index (the “ROX index”) based on the ratio of pulse oximetry and FiO2 to respiratory rate.

That pneumonia doesn’t get better with NIV is a widely believed factoid from the ICU mythology, perpetuated by wisened elders. Because it impairs the clearance of secretions, NIV has been maligned as an ineffective strategy, one which merely delays the inevitable intubation. It does not help that studies which compared NIV to invasive ventilation usually end up with a huge proportion of their NIV group crossing over into invasive ventilation. For instance, Jolliet et al (2001) found that two-thirds of their NIV patients ended up getting intubated, and Murad et al (2015) had to intubate 76% of their NIV group.  One might interpret that in the same way as mortality data - logically, if they didn’t get intubated, they probably would have died. Additionally, Carrillo et al (2012) have demonstrated that a longer delay in patients who are failing NIV had led to increased mortality, prompting some pragmatists to discard the whole practice as a time-wasting exercise.

However, those patients who have “successful” NIV go on to have a reasonable survival. Particularly if the NIV has something to work on which is in addition to the pneumonia and which is conventionally susceptible to NIV. The typical comorbidities which benefit from NIV include cardiac disease and COPD. In the review by Carrillo et al (2012), “successful” NIV was defined as avoidance of intubation for 24 hours, which does not sound particularly successful - if you’re  NIV-dependent afterr 24 hours, one can hardly say they’ve made a lifesaving breakthrough in your treatment. With that caveat, of the patients who had cardiac disease or COPD, after 24 hours of NIV only 26% were intubated, whereas patients who required NIV purely for pneumonia (i.e. no background problems) failed NIV more frequently (46%). Again, this serves to demonstrate that pneumonia is not a condition which responds particularly well to NIV.

Deciding when to intubate

An exam answer to an SAQ which asks for “factors which might influence your decision to intubate” would need to discuss several matters. These consist mainly of risk assessment instruments, considerations regarding comorbidities, and determination of mortality risk.

Being intubated for these people is not a trivial risk, and appears to be an independent predictor for mortality. Cilloniz et al (2014) found that if you arre sick enough to need intubation for pneumonia, your mortality ends up being around 33%; whereas those who did not need any sort ventilator support (NIV or otherwise) had a mortality of 6%. Intubated pneumonia mortality statistics are about the same in Turkey (24%-30%, from AlOtair et al in 2015), in Australia (32% according to Wilson & Ferguson in 2005) and Spain (33% for Ferrer et al, 2018).

The most commonly used risk assessment tools used to determine mortality from community-acquired pneumonia. Without going into it in any great detail, they are:

Historically, this is not a condition which might result in a “short trial” of mechanical ventilation, no matter what the resuscitation directives created by respiratory physicians might suggest. There is little specific data regarding this, but overall it seems that to intubate a critically ill pneumonia patient is a substantial time commitment. In a review by Aydogdu et al (2010) the surviving patients were ventilated for an average of 13 days. It is unlikely that the Turks are doing something dramatically different to what the rest of the world is doing. Ryan et al (2014) presented some Irish data which agreed very closely (13 days was the mean). A more recent entry by Ferrer et al (2018) had somewhat shorter durations, with an average ICU stay of 10 days. It’s also probably shorter with viral pneumonia and longer with Gram-negatives.

So, on the basis of this that debilitated chronically ill and functionally impaired patients would probably not survive their mechanical ventilation marathon. Indeed that appears to be the case. Jose Anon et al (2010) found that the over-75s had an in-hospital mortality of 46%, whereas it was 33% among the younger patients. Functional outcomes are also usually worse. Looking at elderly patients ventilated for any reason, Lieberman et al (2009) found only 11% were “doing well” functionally at 1 year, with a 78% 1-year mortality.  Interestingly, Hifumi et al (2015) found no major influence from age on mortality or duration of mechanical ventilation among elderly Japanese patients, who according to folk wisdom are somehow more robust in their old age.

So, let’s say they got intubated anyway.

The classical situation is not what is set out above, where scholarly elders deliberate carefuly upon the ramifications of their decision to intubate or not intubate a specific patient. More than likely, the ICU trainee at the midpoint of their career will not be in this position. The more likely scenario is that their consultant, woken by them in the middle of the night,  muttered sleepily on the phone that they should intubate the patient and admit them to ICU, because that’s a much easier decision to make. An even more likely scenario is the elderly intubated critically hypoxic patient on 100% FiO2 being dumped on their doorstep by someone from the ED, who rings the doorbell and runs away. The ventilator settings appear chosen at random and the patient’s extremities are a greyish purple colour. How does one approach this clinical scenario with maturity, without completely losing their shit?

There are several strategies you can employ to improve gas exchange and rescue this spiralling catastrophe.

Of these measures, the specifics and supporting evidence for prone ventilatiion and pulmonary vasodilators are discussed elsewhere. Here, we will focus on the stuff most relevant to severe pneumonia.

This can also be described as “poor man's prone position”, as it works on similar principles. The patient is positioned with the “good side down”, i.e. if the left lung is diseased the patient is placed in a right recovery position. In this fashion, the hydrostatic pressure drives blood into the well-aerated lung. It was first described probably in the 1980s; for example  Dhainaut et al (1980) recommended this technique for spontaneously breathing patients as a means of avoiding intubation. It appears to work; Dreyfuss et al (1992) were able to get a substantial improvement in the PaO2 by means of positioning their patients “good lung down”, from 100 mmHg to 150 mmHg.  Delmar et al (1987) found that in some patients this improvement was due to a decrease in right-to-left intrapulmonary shunt, and in others due to an improved ventilation-perfusion equality.

Major disadvantages of this technique are poor tolerance by the patient and the risk of contaminating the good lung with infected material from the bad one. On top of that, the technique doe snot enjoy a great deal of support int he modern literature. Hewitt et al (2016) reviewed it Cochrane-style and were unable to find enough evidence for them to get behind it, even though Nicole Anne Hewitt actually made a Masters thesis out of this problem. That is not to say that this strategy is somehow pseudoscientific or unfit for use- it certainly works to improve oxygenation, but one cannot help wondering whether the risk from frequent position changes and potential  "good lung" contamination outweigh the benefits from improved gas exchange.

In the context of severe unilateral consolidation, there may be some argument for ventilating the good lung selectively. This seems to be a very eighties thing to do. Northwood (1989) and Stow et al (1985) wrote about “asynchronous independent lung ventilation” as a solution for severe unilateral lung disease. Earlier, Carlon et al (1978) presented a series of nine cases ventilated in this fashion, deriving from their experience a set of criteria for such an unusual approach. This approach is mentioned in more recent reviews (eg. by Baudouin, in 2002) but has otherwise largely fallen into disuse. The major advantages, the authors claim, was the isolation of the sick lung, so that the filthy secretions thereof will not contaminate the good side. The disadvantages, of course, involve the use of dual lumen tubes and the need for paralysis, risk of dislodgement, tracheal injury, and so forth. There does not appear to be a very strong argument in favour of this therapy. It is mentioned here as an option which one should be aware of, along with arguments for ignoring it.

The interplay of PEEP, shunt and fluid resuscitation

Even without a patent foramen ovale, the application of high PEEP to somebody with severe lobar pneumonia may result in the paradoxical worsening of their oxygenation. This phenomenon is well explored by Başak & Luks (2014) in a case report describing the management of a 52 year old lady much of whose left lung was taken out by pneumonia.

The phenomenon of worsening shunt due to PEEP can be described thus:

Fluid resuscitation increases tight ventricular preload, thereby increasing its contractility and hopefully helping it overcome the increased pulmonary vascular resistance in the "good" lung. That should help shrink the size of Wests' Zone 1, and improve oxygenation. The alternative approach is to use pulmonary vasodilators, which should offset some of the PEEP effect by dilating the pulmonary vasculature in the well-aerated lung units.

Ryan, D., et al. "Aetiology of community-acquired pneumonia in the ICU setting and its effect on mortality, length of mechanical ventilation and length of ICU stay: a 1-year retrospective review." Critical Care 18.2 (2014): P64.

Hifumi, Toru, et al. "The impact of age on outcomes of elderly ED patients ventilated due to community acquired pneumonia." The American journal of emergency medicine33.2 (2015): 277-281.