Even though REBOA is a technique currently limited to the largest most technologically advanced sandstone centres, the college had decided to allocate 10 marks to it in Question 17 from the first paper of 2020. It is something one might describe as a "heroic" measure in the management of severe trauma, a shadowy territory at the edges of death which it shares with such techniques as resuscitative thoracotomy,  SAAP and EPR. The value of exploring this in the end-of-training-pathway exam is questionable, as it is unlikely to be a part of the standard toolkit of the average intensivist. However,  the company site claims there are numerous centres using them, and so this may be something moving steadily towards the mainstream.

If one were inclined to navigate the treacherous waves of FOAM, one could do no better than Chris Nickson's REBOA page from LITFL, which bears the stamp of authenticity from being written by somebody who's actually used those things. In terms of published peer-reviewed material, Napolitano (2017) is an excellent free paper which probably contains everything you need to answer Question 17.

This is not a new idea, as very little is. Lieutenant Colonel Carl W. Hughes published on this topic in 1954, reporting his team's experience with exsanguinating Korean War casualties. Enrolment criteria were fairly arbitrary; in fact the author admits so: “It was arbitrarily decided that the catheter would be used only in moribund cases with evidence of intra-abdominal bleeding in which blood pressure could not be obtained after administration of 10 units of blood.” Hughes' original device is depicted below: 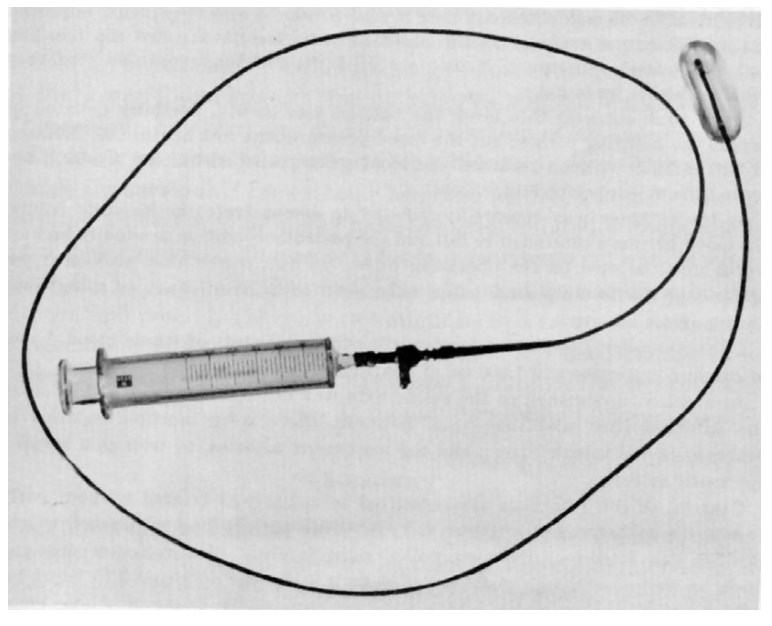 The outcomes were terrible, as befits "moribund cases with evidence of intra-abdominal bleeding".  There was the barest glimmer of a silver lining:  "Although both patients expired, the catheter was effective in temporarily restoring the blood pressure in one case".

Without further wars to stimulate interest, further exploration of this technique was minimal until a paper by Ledgerwood et al (1976) which reported on aortic occlusion in forty patients from Detroit General. At that stage, the city was often reported as the murder and arson capital of America, which made it easy to collect the cases. The authors did not use an endovascular balloon - they opened the chest and used a thoracic aortic clamp. In the 1980s, small case series (Low et al, 1986; Gupta et al, 1989) also reported fairly depressing survival rates, but they weren't zero, which kept a low-grade level of smouldering interest in the technique.  Ultimately, it was probably the 2010 study by Martinelli et al which properly stimulated interest when 46% of their severe pelvic trauma patients had survived.

Though there is a small group of what appear to be start-up companies producing equipment for REBOA specifically, the original papers and most subsequent research have been performed using existing vascular surgical equipment. For example, the Cook Medical Coda balloon is a 14-Fr object one could easily insert into a major vessel (not smaller than 24mm in diameter), and inflate there to achieve haemostasis. It's 120cm long, which gives you plenty of slack if your patient happens to have unexpectedly generous dimensions. The catheter is inserted through an introducer sheath (similar to other angiography devices); such a sheath can be upsized from a standard arterial line.

There is a whole range of such devices, and there does not appear to be any specific advantage of choosing one over another. One exception to this statement may be the appearance of percutaneous insertion kits, which might become available as this technique gains in popularity.

The technique of REBOA

Probably the best technical description of this technique can be found in Stannard et al (2011). In brief, the steps are:

Question 17 from the first paper of 2020 asked specifically for the mechanism of action of REBOA. This seems like a fairly straightforward thing to answer. Basically, you block the blood flow to the lower body, and stop the blood loss thereby, buying some time for damage control surgery. At the same time, cardiac output is redirected to the upper body, hopefully preserving the brain.

Advantages over other sorts of aortic occlusion:

This is actually such an unclear area that the CICM Question 17 from the first paper of 2020 asked only for "potential indications", perhaps acknowledging that all of them are completely arbitrary. For instance, the Fitzgerald paper used the following enrolment criteria:

Given that this is a relatively recent development and data in support of it are so far lacking, whatever contraindications you invent are also going to be fairly arbitrary. For instance, one might argue that this is a device which should not be used on the extremely elderly. Then, the question arises, what age cut-off do you choose? 80 is the new 70, they say. And what if they're a "good" 85, with minimal comorbidities?

Contraindications to REBOA include blunt cardiac or aortic injury, and penetrating neck or chest trauma where resuscitative thoracotomy may have an advantage in the provision of definitive hemorrhage control

Disadvantages and complications of using REBOA

Evidence in support of REBOA

van der Burg, BLS Borger, et al. "A systematic review and meta-analysis of the use of resuscitative endovascular balloon occlusion of the aorta in the management of major exsanguination." European Journal of Trauma and Emergency Surgery 44.4 (2018): 535-550.