Benefits of diastolic augmentation by the IABP

The benefit of diastolic augmentation is the effect of increasing diastolic pressure, and thereby increasing coronary blood flow. The beginning of diastole is the perfect time to inflate the balloon- during this time, there is the largest amount of blood in the aorta. As it inflates, the balloon displaces this volume upwards into the aortic root, and downwards into the abdominal aorta and its branches. Beyond this level of understanding are discussions of such exotica as the diastolic filling time index, which - though interesting - is unlikely to yield marks in the CICM Fellowship exam. These matters have never come up in the exam historically, and - given the gradually diminishing role of IABP - they are unlikely to play a significant deciding role in the success or failure of a written Part II SAQ or viva. The time-poor candidate would be well-advised to limit their revision to the content of the grey box below.

In brief, the benefits of the IABP can be summarised as follows:

As the aortic valve closes in end-systole (this correlates with the dicrotic notch) the IABP balloon inflation pushes blood against the closed valve.

The beginning of diastole is the perfect time to inflate the balloon- during this time, there is the largest amount of blood in the aorta. As it inflates, the balloon displaces this volume upwards into the aortic root, and downwards into the abdominal aorta and its branches. 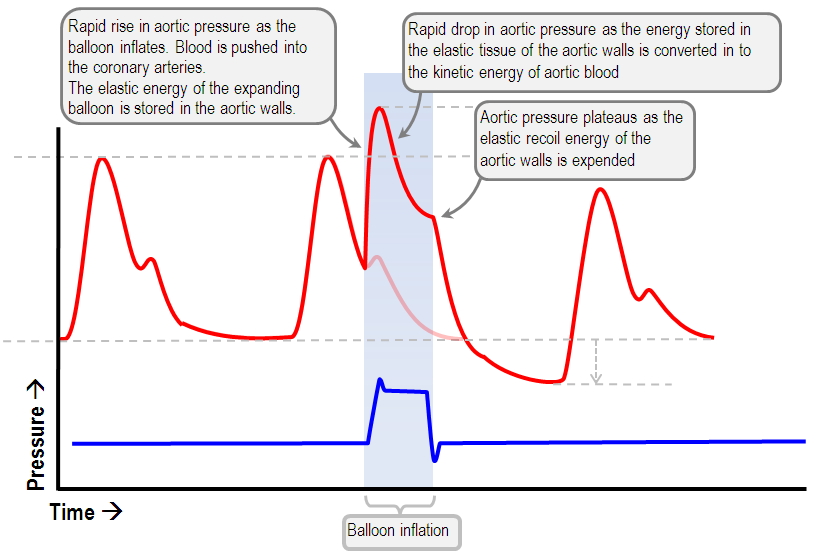 Only a balloon's volume worth of blood is displaced- thus, no more than 60ml; however this is enough for coronary arteries, and in any case, some of the force of the balloon's expansion is stored in the elastic tissues of the aorta, and thus transmitted to the column of blood.

Thus, as the balloon inflates in diastole, it creates a peak of pressure, which is the diastolic augmentation.

By increasing the diastolic pressure, the IABP improves coronary perfusion.

The physiology behind this is fascinating. By increasing the diastolic pressure, the IABP increases the DPTI - the Diastolic Pressure Time Index, a key variable determining myocardial oxygen supply. 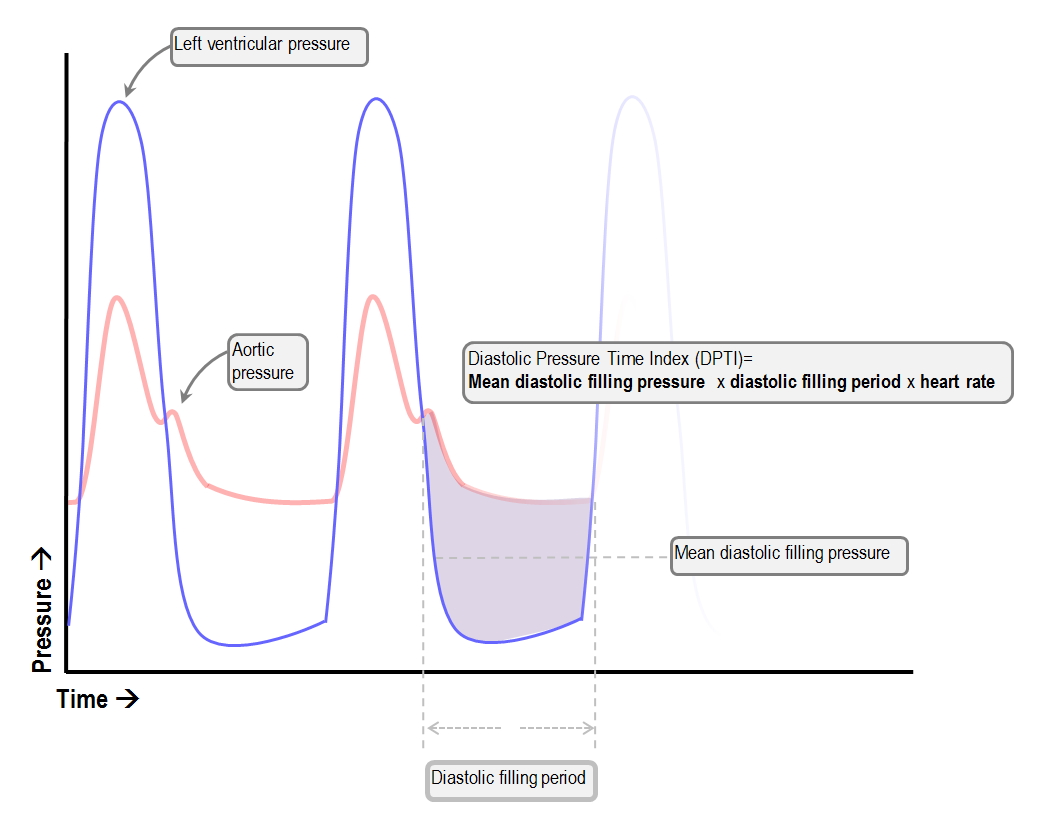 The DPTI is crudely the time spent in diastole at a certain pressure. It reflects the time during which the diastolic pressure in the aorta fills the coronary arteries. At least in dogs, this pressure correlates with the driving pressure behind the perfusion of the subendocardium, that tender meaty area which is so susceptible to ischaemia, and which we fret about in our IHD patients.

Now, observe what happens to the mean diastolic filling pressure with diastolic augmentation 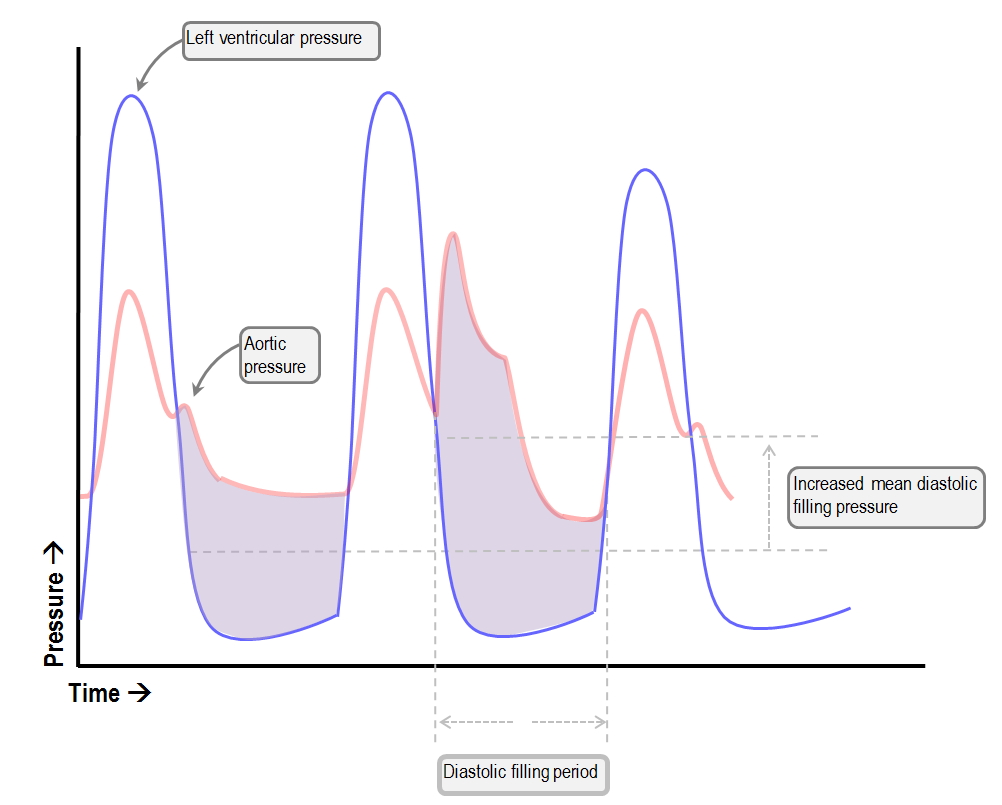 Empirical evidence for the benefit of diastolic augmentation

So is it actually beneficial to have good diastolic augmentation? And how "augmented" does one need to be to feel some benefit? For example, frequently one finds that people expect the diastolic peak pressure to be above the systolic peak pressure. Is this a sensible thing to wish for?

Well. It would seem that rather than the peak, one ought to focus on the mean diastolic pressure,

at least where coronary arterial perfusion is concerned. The higher the mean diastolic pressure, the greater the flow in the great cardiac vein (and, this implies, the better the perfusion of the left ventricle). 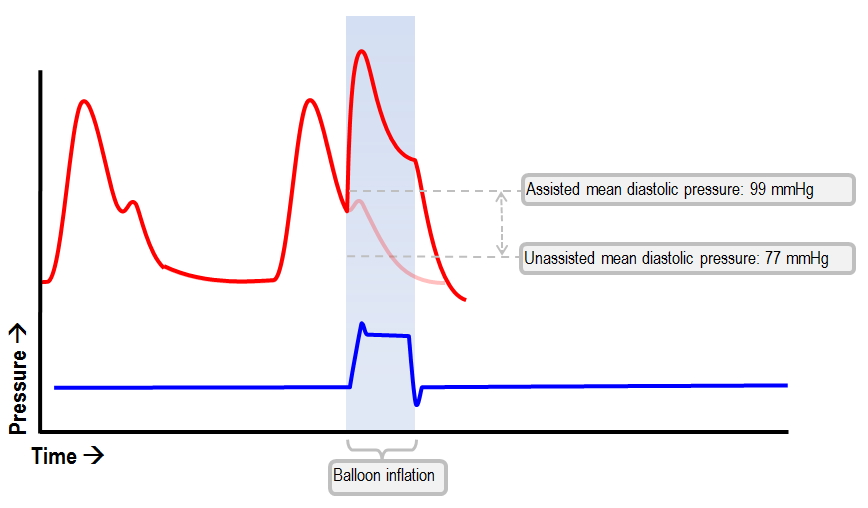 In this small study, the diastolic augmentation for a 40cc balloon resulted in an increase in mean aortic diastolic pressure from an average of 77mmHg to 99mmHg, with a proportional increase in great cardiac vein flow (from 44ml/min to 54ml/min). Of great relevance is the fact that the patients all had 90% proximal LAD stenosis.

I would prefer to think it was the latter. My diagram of diastolic augmentation assumes this.

But, this is a digression.

In short, there is experimental evidence that increased diastolic augmentation increases coronary perfusion.

Of course, this is raw untreated physiology.

Whether there is a mortality benefit from this - that is a matter for ongoing debate.