Historically, the college has asked specifically about the diagnostic approach to hyponatremia in the following SAQs:

Actual case studies of hyponatremia have included the following questions:

Anthony Delaney and Simon Finfer wrote the fluid and electrolyte chapter for Oh's Manual (Ch.93, p. 949). One expects that at some stage these people may have written some of the past paper questions. At this, one might conclude that a thorough knowledge of that chapter would therefore be of interest to the more cunning candidate. To some extent, this is true. Of specific interest is Box 93.1 ("Common causes of hyponatremia") on page 952.  In homage to Oh's manual, Box 93.1 is reproduced below with minimal processing (only a few additions).

Finfer and Delaney's chapter  for Ohs Manual does not enter into over-long discussions of volume status, perhaps tacitly acknowledging that we suck at determining it. Their classification resembles neither the classical pattern, nor the lazy man's shortcut seen below. Rather, they separate hyponatremia into "spurious" (i.e. due to some sort of error), "water retaining" (which includes heart, liver and kidney failure, SIADH and polydipsia) and "salt losing" (a minority group including diuretic excess and hypoadrenalism).

As for the diagnosis of hyponatremia, the Manual is somewhat lacking. A brief discussion of tonicity as a classification system for hyponatremia is followed by an indepth exploration of only three specific hyponatremias: TURP syndrome, SIADH and cerebral salt wasting. The Manual's concentrated wisdom was expanded upon in specific chapters relevant to these disease states:

The best resource for hyponatremia is probably the 2002 article by Haralampos Milionis. It offers a step-by-step diagnostic algorithm (which was used as a model for the ones in this chapter) and discusses the diagnostic pathway with just enough detail. LITFL also have a page on this in the CCC, and it too offers a diagnostic algorithm. A third alternative, based on using a comparison of urinary and plasma tonicity, is presented by Castle-Kirzbaum et al (2021) In essence this approach relies on the clinician's abilities of assessing volume. There is an alternative, seen below. Notice how at no stage is one invited to actually examine the patient. No, it does not include the usual "hypervolemic, hypovolemic, normovolemic" classification. For one, clinicians are very poor at detecting all but the grossest fluid balance disturbances. And ultimately, I wanted a diagnostic algorithm which one could use to narrow down the list of differentials over the phone.

A lazy man's classification of hyponatremia 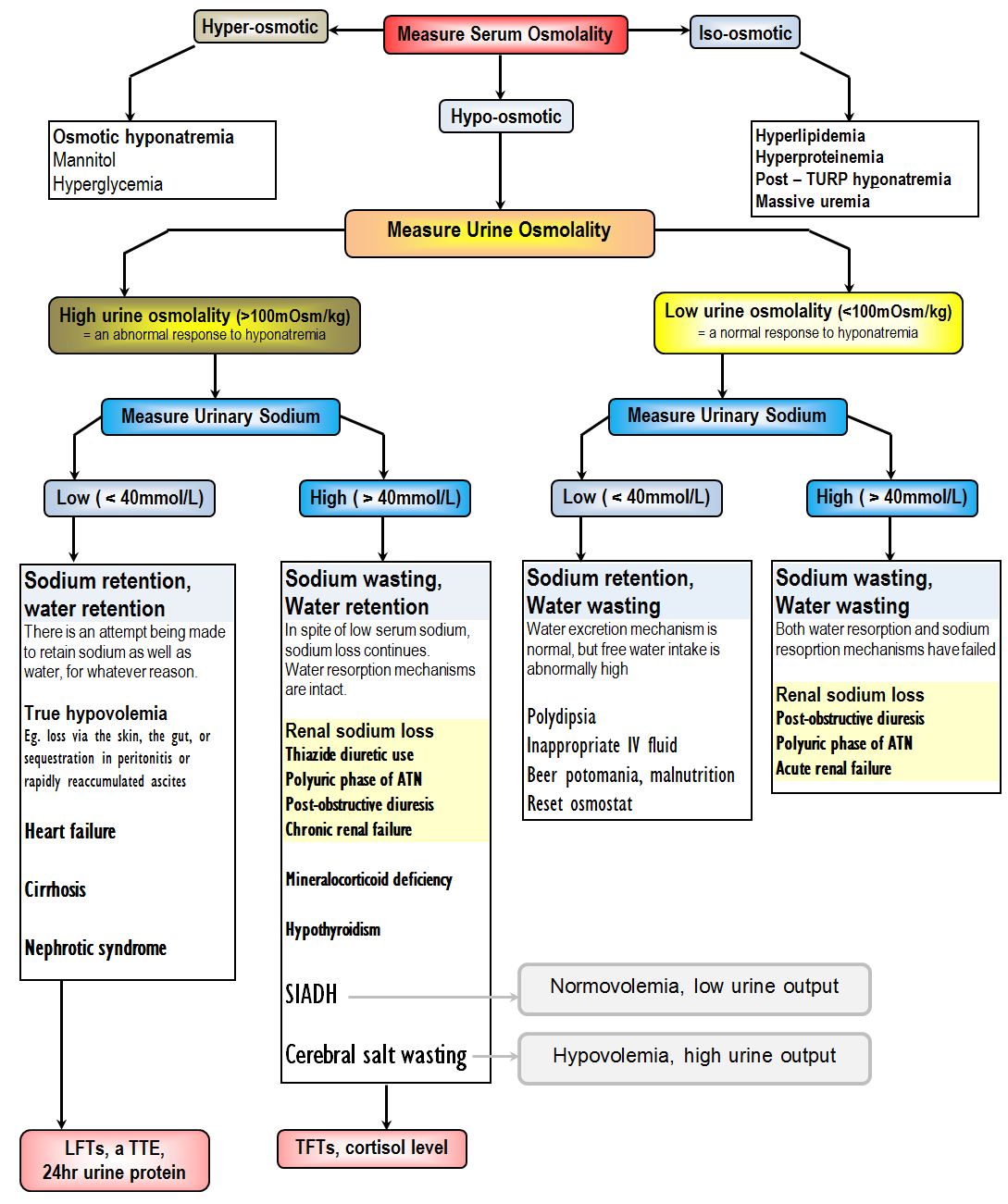 There are two possible approaches to the diagnosis of hyponatremia: . Both are offered here. In their most basic form, the classical method and the "lazy man's method" require essentially the same tests (serum osmolality, urine osmolality and urinary sodium). In the classical method, one is expected to examine the patient and come to a conclusion regarding their fluid status. The lazy man will of course do no such thing, as it requires for him to get up. Instead, the examination of the patient is deferred until the absolute last moment, and consists of deciding whether the patient has SIADH or cerebral salt wasting.

Of specific interest to the exam candidate is SIADH. This comes up frequently, and was the topic of a particularly in-depth SAQ (Question 29 from the first paper of 2015) which was only passed by 29% of the candidates. SIADH is explored in

The following bits of historical information are important:

The following standard battery of tests can be launched; particularly if history is unhelpful, or one cannot bring oneself to interview the patient or their family.

This is always asked for, as it helps classify the hyponatremia as "something-osmolar", i.e. isoosmolar or hyperosomolar. However, realistically in most circumstances one may safely dispense with this investigation. Even when answering the phone at night, you would know whether the patient has had a TURP in the last 24 hours, or whether they are suffering from a hyperosmolar coma. Serum osmolality is mainly a screening test for isoosmolar hyponatremia, as it may reveal an extremely high serum protein or lipid. Outside of those scenarios, the serum osmolality is usually boring and low.

So, pretty much all the hyponatremia you're ever going to deal with is going to be hypoosmolar.

This is also ordered frequently, and also has low yield. A thorough exploration of urine osmolality (and specific gravity, and why they aren't interchangeable) is carried out in the chapter on urinary electrolytes. In brief, this investigation helps you decide whether or not the kidneys have retained their ability to make dilute urine. Producing copious amounts of dilute urine is the only sensible way you can physiologically restore your tonicity, short of engaging in high-risk sodium seeking behaviour. Ergo, a hypoosmolar hyponatremic person should pee buckets, and their urine should resemble tap water.

A maximally dilute urine (around 50-100 mOsm/L) suggests that the normal mechanisms in defence of tonicity are intact; i.e. vasopressin release has been appropriately suppressed. This is a characteristic of the following hyponatremias:

Dilute urine may also be the consequence of pathological states where the concentrating capacity is impaired, i.e. irrespective of what the posterior pituitary is doing the kidneys simply cannot produce anything but dilute urine.

Additonally, dilute urine with hyponatremia may be produced in cases of a "reset osmostat", where the homeostatic setpoint for serum osmolality is depressed. So, a low urine osmolality narrows the differentials very significantly. However, urine which remains obstinately concentrated in spite of a hypoosmolar state is not informative, as it leads to a massive number of differentials. The urinary sodium is the investigation of choice to help discriminate among them.

This investigation on its own only tells you what the renal sodium handling capacity is like. This has a fairly peripheral importance to the sodium disturbance.  Jack Orloff et al (1959) in their clinical conference on hyponatremia remarked:

Urinary sodium is most useful when one needs to discriminate between SIADH and dehydration. Dehydration is a syndrome of  "appropriate" ADH secretion - it is correct to oppose diuresis if you are volume-depleted. In such a situation, aldosterone secretion also increases and sodium reabsorption takes place,  leading to a urinary sodium around 10mmol/L (which is the theoretical minimum). Generally speaking, anything less than 20mmol/L is thought to be an appropriate sodium-conserving gesture when you are in a hypovolemic state. In contrast, SIADH is an euvolemic state, and the urinary sodium is usually normal or high (the usual diagnostic criteria specify a threshold value for urinary sodium, over 40mmol/L.)

Thus, if urinary sodium is low, it could represent a normal renin-angiotensin-aldosterone response to hypovolemia, or an abnormal overreaction to an "apparent" low volume state. Differentials include the following:

Urine sodium can also be low in situations were the renal sodium and water handling is completely intact, in which case it represents a perfectly reasonable attempt to retain sodium and excrete excess water. Psychogenic polydipsia, beer potomania and excessive 5% dextrose administration are possible causes of such a scenario.