Realistically, it would have been ideal to discuss the filtration functions of the glomerulus alongside with its structure, as the two are closely associated, but in attempting to do so the author produced a completely unworkable Voynich manuscript overgrown with profane apocrypha. Some uncomfortable self-examination followed, and most of these digressions were expelled into a separate chapter on glomerular structure, prefaced with a stern warning against anyone ever trying to read it.

Glomerular ultrafiltration is influenced by the Starling equation:

Glomerular filtration of solutes is affected by:

Regulation of glomerular ultrafiltration is achieved by controlling the vascular resistance of the afferent and efferent arterioles, via these factors:

In terms of legitimate peer-reviewed resources, there are several one could immediately recommend.  Renkin & Robinson (1974) is good, but old, and paywalled. On the other hand, Pollak (2014) is good, recent, and free. It also has a pun in the title, which instantly elevates it above the rest of nephrology literature. Another excellent (and incredibly detailed) entry is Deen et al (2001), not the least of its merits being that it was co-authored by William Deen who is responsible for some of the seminal research in glomerular function during the seventies.

Origins of the glomerular ultrafiltrate

Glomerular ultrafiltration, which is the extrusion of blood water into Bowman's space, happens only because of an imbalance of Starling forces in the glomerulus. If one had to explain this to somebody who has never heard of the Starling equation, in the shortest possible form:

For exam purposes, mention of the Starling equation is probably essential. As this is a highly glomerulocentric chapter, the equation would have to have some modification to its terms so that it is clear to the examiner that one is specifically discussing the glomerulus.

...is transformed into this:

The symbols used in the literature vary erratically in terms of the Greek letters used, capitals versus lower-case, the use of subscript etc., and so trainees answering written questions are advised to define the variables in their answers, as the examiners may not immediately recognise their semiotic choices. It would be unfair and unexpected to be asked to discuss these factors individually in any great detail, but in case you have to, that's exactly what happens below.

Kf  - the ultrafiltration coefficient of the glomerulus

Kf  is an empirical constant value that describes the ease (or difficulty) with which water migrates across the filtration membrane. It is a fairly fixed property of the glomerulus, or rather it is not something that is expected to vary over a short timeframe, and it is certainly not something susceptible to regulation or manipulation. Obviously with renal disease (eg. diabetic nephropathy, which thickens the glomerular basement membrane) this variable will change, but this occurs over the timeframe of years.

What is the normal value for Kf? And how would you even express it? It is a measure of how fast a volume of fluid migrates across a membrane under a given pressure, which means you would probably want to express it in terms of volume per unit pressure per second, which is indeed what seems to happen in the literature. For example, Deen and colleagues measured the Kf of individual rat glomeruli in 1973 and reported an average value of 0.08 nl/(s × mm Hg). Obviously individual nephron values are pretty meaningless, but you can scale Deen's formula to report a total Kf for both kidneys. For young human subjects, Hoang et al (2003) reported an average value of 11.3 ± 4.9 mL/(min × mm Hg).

k - the permeability of the glomerular filtration surface

Kf  is itself a composite of two influence, one the permeability of the glomerular filtration surface to water, and the other its surface area. Both of these are difficult to measure or estimate, and are themselves composites of other variables (for example the permeability to water consists of separate permeability coefficients for the basement membrane, endothelial pores, glycocalyx and podocyte slits). For a truly granular mathematical description of these, one can refer to Deen et al (2001).

S - the surface area of the glomerular capillaries

The surface area is somewhat easier to discuss than membrane permeability. For the reader with an unhealthy fixation on measurements and numbers, Bohle et al (1998) give the total glomerular surface area as around 500 cm2.  Interestingly, this property does seem to be under some degree of regulatory control. Mesangial cells are apparently capable of managing this aspect of glomerular filtration by contracting and relaxing.   They are, after all, just severely mutated versions of vascular smooth muscle cells. That they contract in vitro is certain, and old light microscopy studies recorded cinematic loops of glomeruli pulsating weirdly under the influence of vasoactive mediators (i.e. they surely do change their size). However, whether this really makes any difference to the overall rate of glomerular filtration is uncertain, and articles about it have titles with words like "lingering doubts" in their titles (Ghayur et al, 2008). The consensus of experts seems to be that, if this contractile function is indeed a part of the glomerular regulatory toolkit, then it is surely the tiniest screwdriver at the very bottom.

This is the pressure of the blood coming out of the afferent arteriole as it flows through the glomerular capillaries. Next to the permeability of the actual membrane, this is probably the most important factor which determines the product of the glomerular Starling equation, and is definitely the most important pressure variable. It is also markedly higher than the pressure in normal capillaries, where it is roughly 32 mmHg at the arteriolar end of the capillary and 15 mm Hg at the venular end. Brenner et al (1971) performed the first measurements of this in rats, and found that glomerular capillary pressure was around 50% of the systemic value, close to 50 mmHg.

Another reason for the importance of this variable is its susceptibility to manipulation. Afferent arterioles supply the glomerular capillaries with blood, and efferent arterioles drain it, which means varying the resistance in either will give rise to changes in capillary hydrostatic pressure. By changing this variable, one is able to adjust the net ultrafiltration pressure at the glomerulus (or, keep it stable in the face of other changing variables). Observe:

By pulling on these levers, in the following ways, these regulatory factors can adjust glomerular filtration:

The reader's surprise at the unexpected brevity of these explanations will be relieved by knowing that the mechanisms which influence renal blood flow are discussed in excessive detail elsewhere.

PBC - the hydrostatic pressure of fluid in Bowman's capsule

This is the pressure which the ultrafiltrate is draining into. As the pressure gradient between this pressure and the capillary hydrostatic pressure is an important determinant of the total ultrafiltrate flow rate, you would want this pressure to be as low as possible, and usually it is. According to Wirz (1956), it is around 7mmHg. Practically, it is rather difficult to measure this directly without brutally destroying the renal corpuscle, but people have successfully shoved pressure probes up into the proximal tubule which (everybody agrees) is close enough.

(Πgc - ΠBC), the oncotic pressure gradient 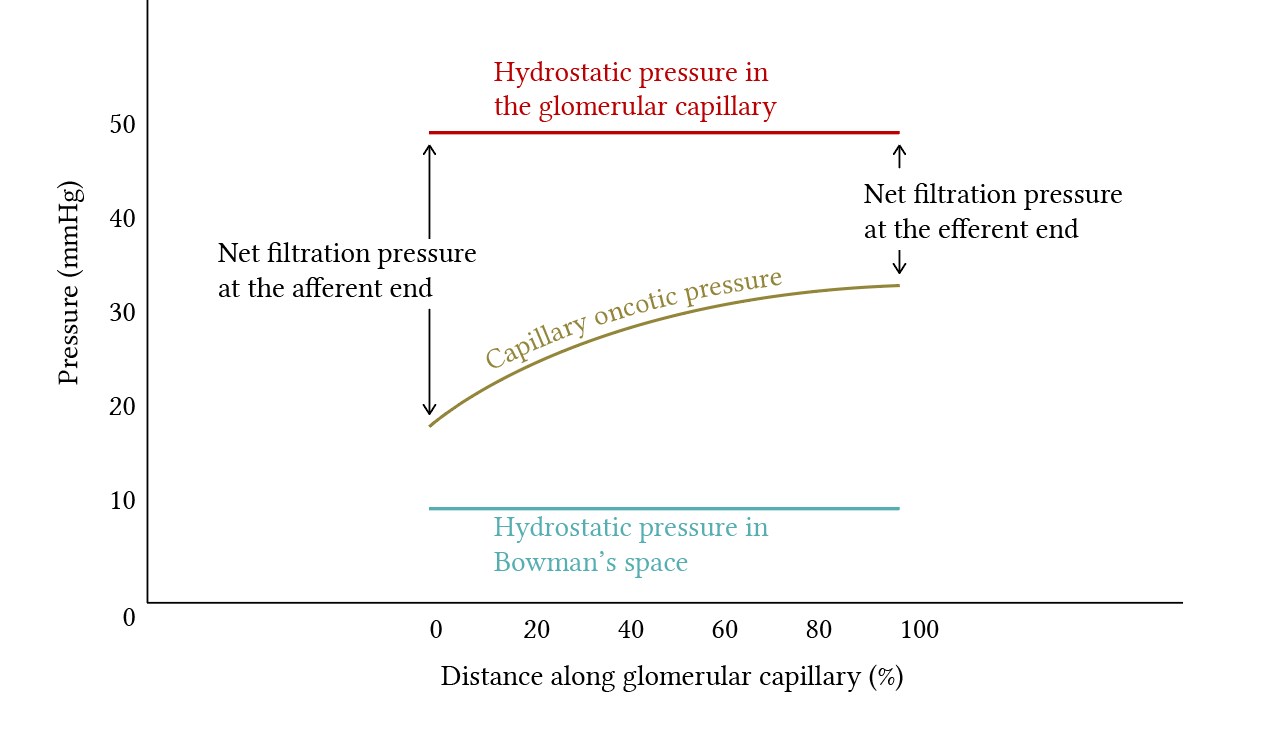 This is theoretically sound, the CICM examiners certainly seem to believe it, and it is mentioned in official textbook canon. Most of the measurements which are often quoted seem to be coming from Ott et al (1976), where "systemic protein concentration were compared to values determined from micropuncture of efferent arterioles in 14 dogs". The protein concentration in efferent arteriolar plasma was about 84g/L, compared to about 48g/L in the systemic arterial blood.

Filtration of solutes at the glomerulus

The barrier function of the glomerular filtration surface is itself beyond doubt, evidenced by the fact that we don't all leak our blood protein content out through our urine every couple of hours. The exact mechanism by which this gatekeeping is accomplished however remains the topic of debate. Particularly, there is no agreement whether there is just a size barrier or whether molecules are sorted in some other way as well, for example by their charge.

This "charge barrier" is mentioned in textbooks, and is both physiologically plausible (as the glomerular basement membrane is certainly packed full of highly anionic heparan sulfate proteoglycans) and supported by experiments (see below). In spite of this, it remains the subject of debate in the literature. Milner (2008) expanded upon the controversies which surround this concept, and was unable to conclude anything helpful. Trainees are advised to come up with some way of making mention of the charge barrier in their answer without committing to any specific heretical theory, for example stating that "anionic molecules in the glomerular filtration surface may repel anionic blood proteins", which is technically not a lie. Moreover, they could quote the classic charged dextran experiments by Bohrer et al (1978) . The graph of their data displayed below has enjoyed great popularity among textbook authors, and is still quoted wherever the charge barrier is invoked. 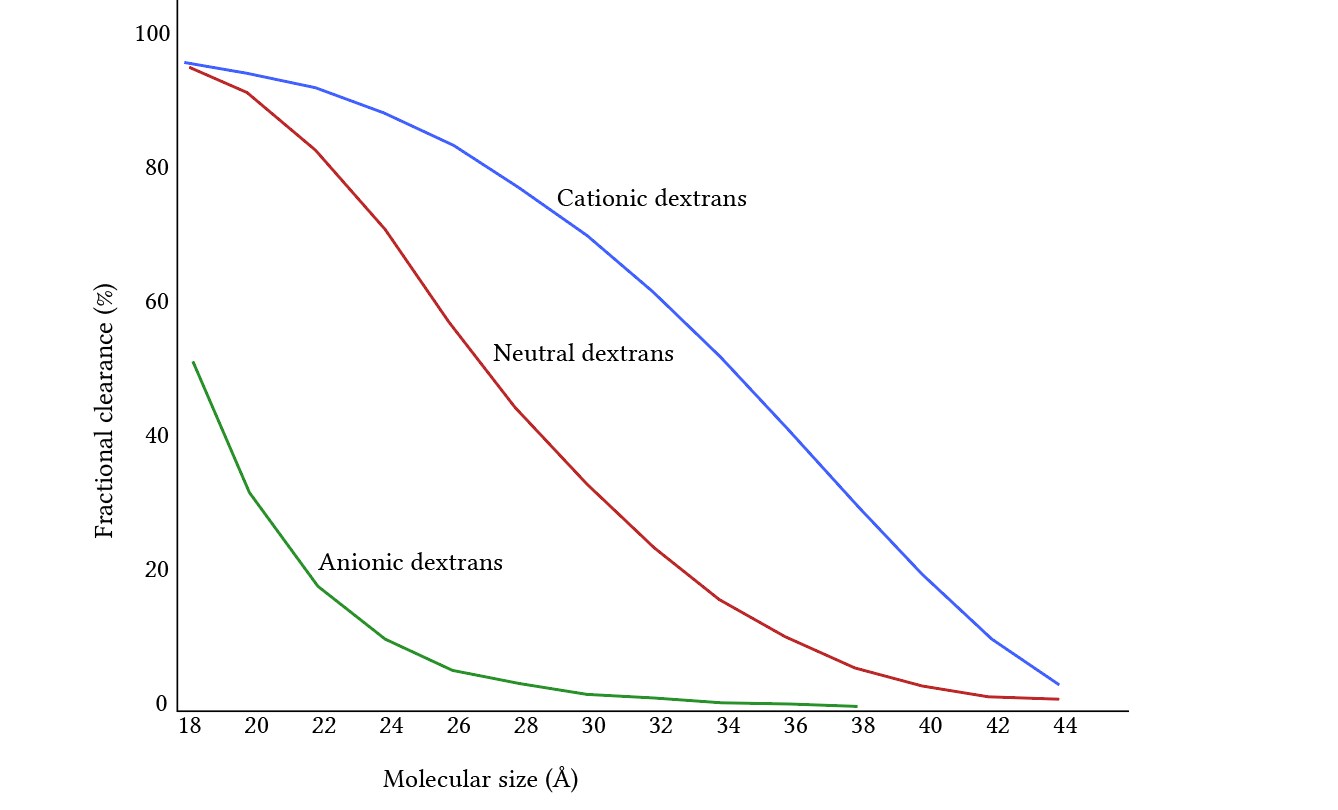 The size barrier is less controversial. For one, its presense and function have been known for longer, and the experiments which described it have aged better. The college answers to their SAQs seem to indicate that 7000 Daltons is some sort of cut-off, but in fact there is something of a spectrum here, with the filtration fraction gradually decreasing as molecular size increases. This is usually reproduced as a table, as follows: 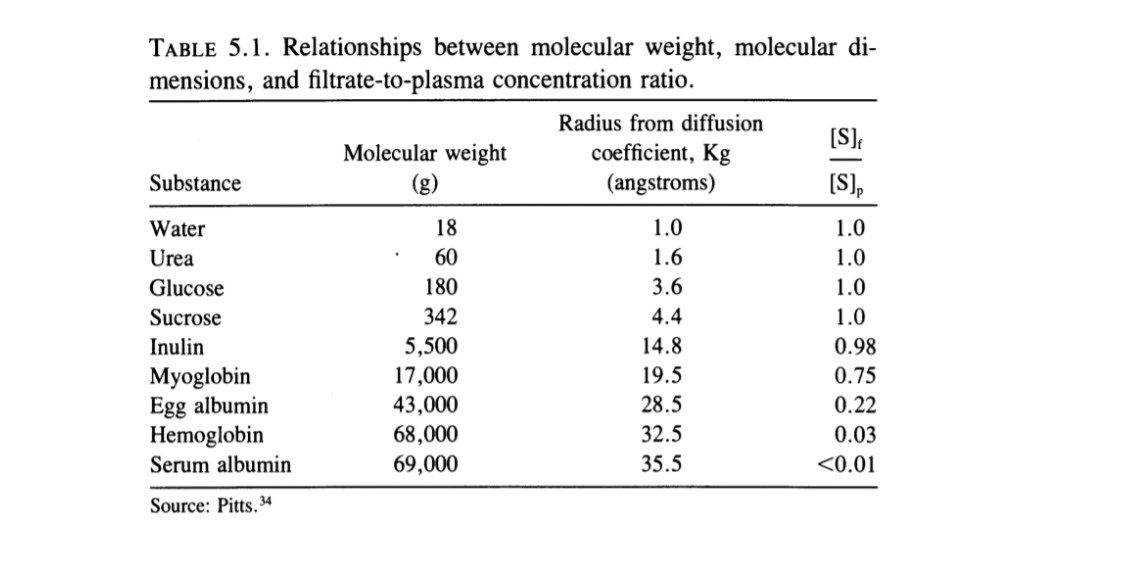 Everybody who ever reproduces this table of filtration fractions vs. molecular weight tends to reference the 3rd edition of Physiology of the Kidney and Body Fluids, a 1974 textbook by Pitts et al (eds). Even textbooks are doing this, and have been repetitively re-doing it since the 1980s. The original text is not available online, except as a vintage hardcover at extortionist prices, which one should not be paying for a book that was critically panned as "inelegant" and "awkward". Fortunately, memorising such tables is probably not essential for passing exam questions about glomerular filtration. One could simply reproduce this graph from Renkin & Robinson (1974), which plots the molecular weight of some unknowable unlabelled "proteins" against their ultrafiltrate/plasma ratio. 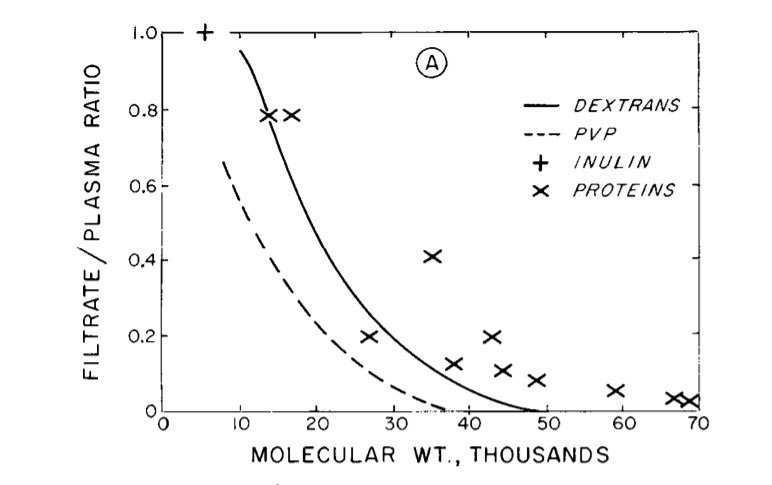 These are concepts which one often encounters during their reading about the clearance of solutes in the glomerulus. There are official definitions, which

The sieving coefficient is therefore substance-specific, i.e. each molecule gets its own sieving coefficient. This requires a measurement of the molecule in the plasma, and - ideally - in Bowman's space, because the proximal tubule does have a tendency to reabsorb various molecules, changing their concentration in the filtrate. As an example, the sieving coefficient for albumin is said to be about 0.006, i.e. only about 0.6% of the plasma albumin ends up in the ultrafiltrate.

In other words, it is the metric which describes how much of the plasma delivered to the kidney ends up as ultrafiltrate. Under normal circumstances, it is 20%.

The total glomerular ultrafiltration of any given human organism is the sum total of the activity of perhaps two million nephrons, with each nephron pitching in its tiny unequal contribution. Horster & Thurau (1968) measured the GFR of individual rat nephrons and found that they can vary markedly in their performance (eg. 23.5 nl/min in superficial nephrons and  58.2 nl/min in juxtaglomerular nephrons).

Yes, that's nanolitres per minute. So how much does the entire system produce? If you consider that the total renal blood flow is about 1.0L/min  (20% of the total cardiac output), and that the normal filtration fraction is 20%, you'd have to conclude that the total rate of glomerular ultrafiltrate production in the Bowman spaces of a pair of normal kidneys is around 200ml/min. This, in fact, would be correct. In order to adjust renal function measurements to human beings who vary in size, the GFR is usually indexed to 1.73 m2 (the BSA of an average 70kg male), where the normal range is 90-120 ml/min/1.73 m2. That would equate to an unadjusted glomerular filtration rate of about 155-208 ml/min.

Deen, William M., et al. "Dynamics of glomerular ultrafiltration in the rat. IV. Determination of the ultrafiltration coefficient." The Journal of clinical investigation 52.6 (1973): 1500-1508.

Squarer, A., et al. "Mechanisms of progressive glomerular injury in membranous nephropathy." Journal of the American Society of Nephrology 9.8 (1998): 1389-1398.