Physiology and consequences of foetal haemoglobin

Section F8(vi) from the 2017 CICM Primary Syllabus expects the exam candidates to be able to "describe physiology and consequences of foetal haemoglobin". Of these, the main "consequence" is the delivery of oxygen to the foetus. Past CICM papers have no SAQs about this topic, which makes a last-minute revision of it somewhat pointless, but it is an interesting aspect of physiology and may one day come up as a question at some stage.

In terms of peer-reviewed reading, there is no single resource which gives a breakdown of this material in a summarised plain language format, even behind the paywalls. A decent overview of placental gas exchange by Goplerud et al (1985) touches on some of the more important aspects without being bogged down by detail, and is probably still valuable in spite of its age. If one needed to scrutinise foetal haemoglobin more closely, a review by Lorkin (1973) is also worth reading.

Structure and origin of foetal haemoglobin

Structurally, this thing is much like the adult heterotetramer, except instead of two α-subunits and two β-subunits it is made of two α and two γ components. As one might imagine, this has implications for positive cooperativity and oxygen-haemoglobin binding kinetics.

At birth, of the total haemoglobin in the newborn, about 70-90% is of the foetal type (Huehns & Beaven, 1971; and 68% according to Bauer et al, 1969).  Foetal haemoglobin is produced by the foetus from about week 10-12. Prior to that, the circulation of the foetus contains embryonic haemoglobin which is even weirder. Weirder still is the fact that hydroxyurea can promote the formation of foetal haemoglobin in a normal adult, by some unknown mechanism. These irrelevant digressions aside, one important st

The main effect of the γ-subunits is the decreased affinity for 2,3-DPG, which produces a right shift (i.e. lower oxygen affinity) in adult haemoglobin, mainly by stabilising the deoxygenated T-state. This is because histidine is replaced by serine in the amino acid structure of the γ-chain, which removes two positively charged residues from the cavity. Because of this, there is a decreased affinity for that substrate - i.e. foetal haemoglobin does not seem particularly interested in binding to 2,3-DPG, and as a consequence is permanently left-shifted (the mechanism of how this works is explained elsewhere).

The image below is a traced and cleaned-up version of something similar which appears in Walker et al (1959). 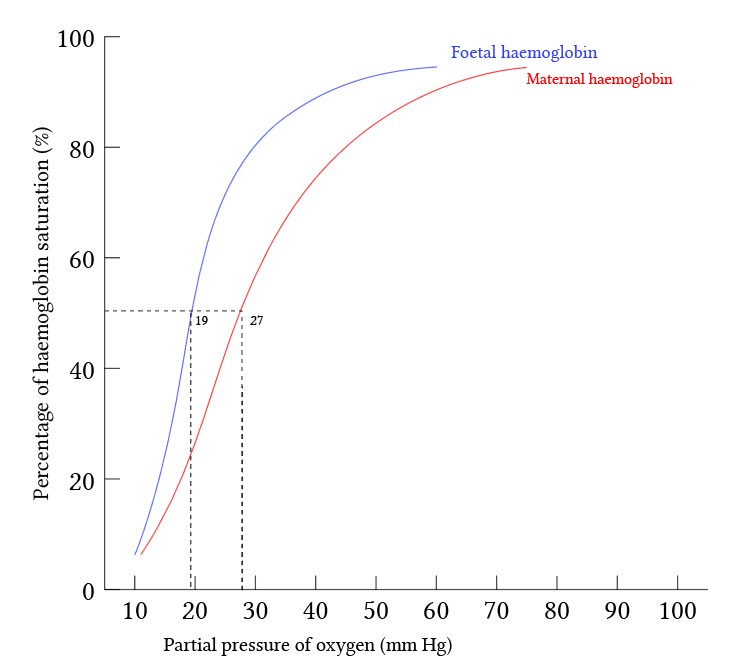 Thus, the p50 of foetal haemoglobin is 19 mmHg, as opposed to 26.7 mmHg for adult haemoglobin. Maternal blood is actually right-shifted by an increase in the 2,3-DPG content (Madsen & Ditzel, 1982), which gives it a p50 of around 30 mmHg (30.5 according to Bauer et al, 1969), but the effect of normal pregnancy-associated maternal hyperventilation tends to renormalise this somewhat.

So, after all that, one might ask: what are the implications of the difference in oxygen affinity between foetal and adult haemoglobin?

Let us revisit the superimposed oxygen-haemoglobin association curves and plot on them some of the points of interest. For example, let us look at the different features of maternal and foetal blood when it arrives at the placenta. Maternal arterial blood should probably be fairly normal, hideous respiratory circumstances notwithstanding, i.e sats of 97% at a PaO2 of around 80mmHg.  In contrast, the umbilical artery (carrying deoxygenated blood from the foetus, analogous to the pulmonary artery) brings quite hypoxic blood to the placenta, with an SaO2 somewhere between 30-45%. Sjöstedt et al (1960) and Clemetson (1953) gave 31-33% as their average, but textbooks can give saturations of up to 45%, because clearly this depends on whose umbilical vessels you sample. Either way, everybody tends to agree that this is very hypoxic blood, which generates a significant partial pressure gradient. 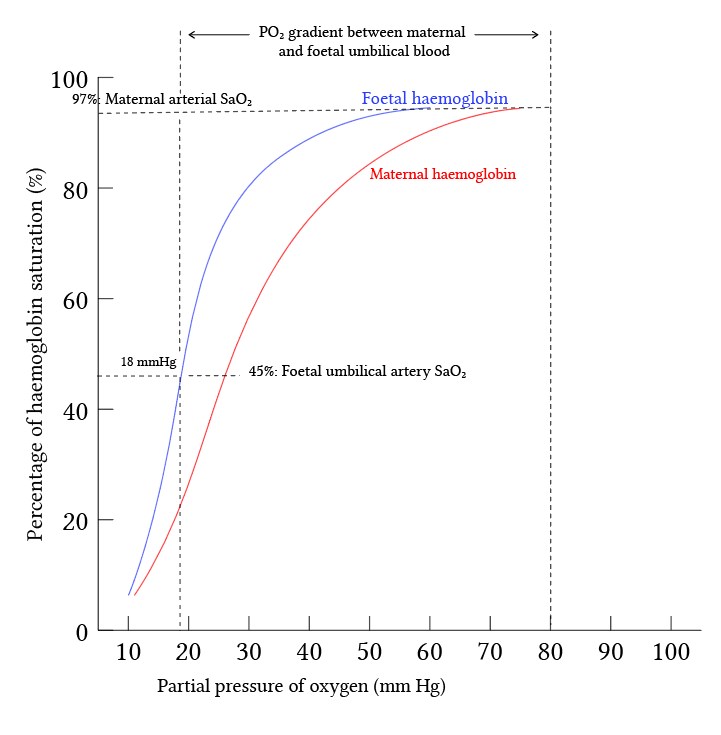 On face value, that seems like an insufficient amount of oxygen for what is essentially arterial blood. Any decent person would be outraged by such uncharitable materno-foetal gas exchange ("You're going to perfuse your foetus with that?"), but in fact it works out to be more than enough. Observe:

If we look at oxygen content instead of partial pressure, everything begins to make sense. At this stage, it is probably worth mentioning that the foetus usually has a much higher haematocrit than the mother,  enjoying a haemoglobin concentration in the realm of 160g/L. Compare that with the average pregnant woman who ends up in the ICU; she is probably going to have a more modest haemoglobin of around 100g/L.  Thus at any given partial pressure of oxygen, the blood of the foetus is going to have a much higher oxygen content. 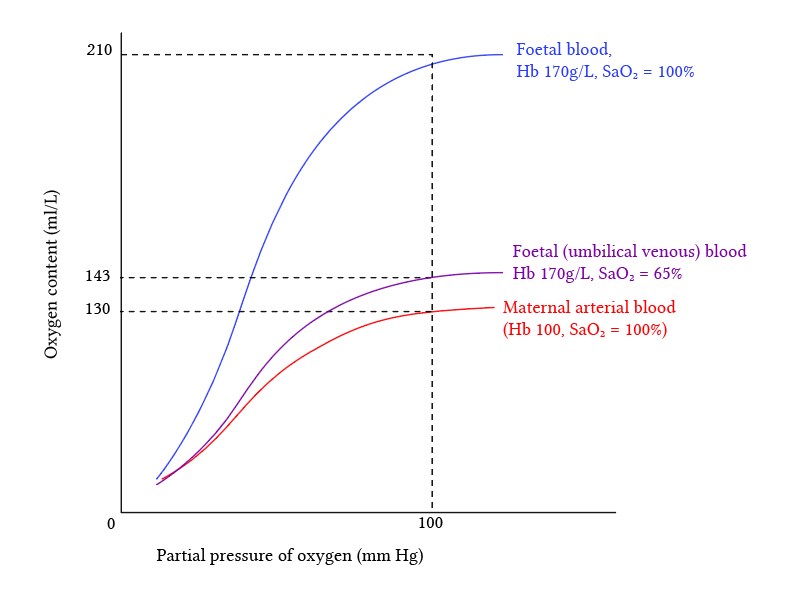 This figure (or one very much like it) appears in The Physiology Viva and is reproduced in various other sources without any reference, though authors with a conscience do mention that "these are probable values...  using data from many sources". Following from this confession the exam candidate should feel encouraged to label each axis with fairly random numbers. The most important thing is the main point: even at a stupidly low oxygen saturation, the foetus is well-supplied with blood, helped in no small part by its thick soupy haematocrit. If the foetal blood has a Hb of 170g/L and an oxygen saturation of 65%, the oxygen content will be (170 × 1.3  × 0.65) = 143 ml/L, whereas the poor anaemic mother will only have (100 × 1.3  × 1.00) = 130 ml/L.

One might recall the Bohr effect, a term which describes the decrease in the oxygen affinity of haemoglobin in the presence of low pH or high CO2 (for example, in the tissues). If the tissues in this scenario are the placenta, one would expect the raised placental CO2 and acidic placental pH to decrease the oxygen affinity of maternal haemoglobin, allowing the release of oxygen. That would be the first Bohr effect. The effect of it is to move the oxyhaemoglobin dissociation curve of maternal blood to the right.

In short, the effect of the foetal and maternal circulations rubbing against each other like that is to move their respective oxygen-haemoglobin association curves further apart. One could probably represent this graphically by taking a zoomed-in snippet of the oxygen haemoglobin dissociation curve graph. This version below is a heavily modified version of an otherwise very accurate graph from Zhang et al (2003). 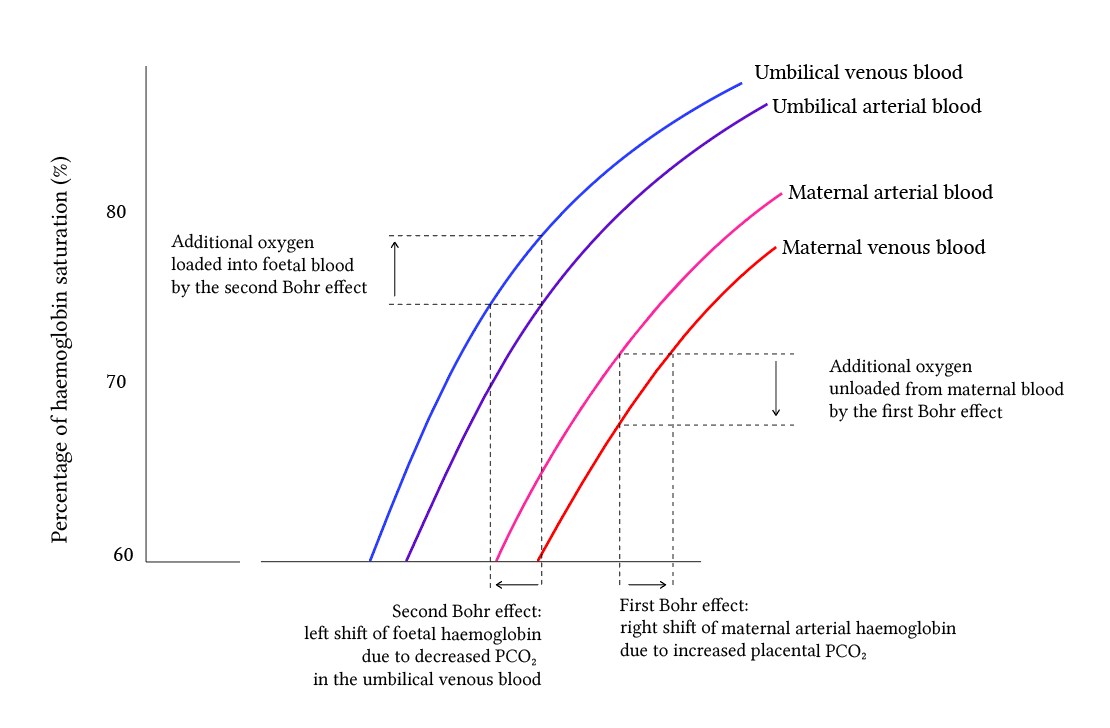 Thus, the consequence of this is an increase in the oxygen transfer from the mother to the foetus. In fact, the process is so well optimised that a surprisingly small amount of haemoglobin is required to make it run

Given that the Haldane effect and the Bohr effect are essentially the same biochemical phenomenon, one would expect that both would be taking place in the placenta. In fact it is not necessary to separate them into the "double Bohr" and "double Haldane" effects, as in any case the name "double Bohr effect" is not exactly official nomenclature, and appears to have been coined by one of the speakers at a scientific symposium in 1959 (H. Bartels). One could just eas easily call this whole thing "the quadruple Bohr-Haldane effect" or something even less informative.

In summary, the Haldane effect is the increased affinity for CO2 seen in deoxygenated haemoglobin. And that's exactly the sort of haemoglobin present in the maternal blood which has shared its oxygen content with the foetus. Foetal blood coming through the umbilical artery is of course quite rich in CO2. Authors seem to disagree slightly on the precise numbers; a nice table in Armstrong & Stenson (2007) gives the spread of values; but most of the figures fall into the 54-56 mmHg range. This partial pressure gradient drives CO2 into the maternal blood and clears CO2 from the foetal circulation, such that the umbilical venous blood returning to the foetal heart has a  PCO2 of around 40mmHg (i.e. close to the adult arterial value).  So, if one had to artificially separate the Haldane effects here, the first would be the release of CO2 by the foetal haemoglobin as it becomes oxygenated, and the second would be the uptake of CO2 by the recently deoxygenated maternal haemoglobin.

An in case that's too clear, here is a maddening Kabelsalat of flowchart arrows and shiny blood-filled tubes, to add some much-needed complexity to this topic. 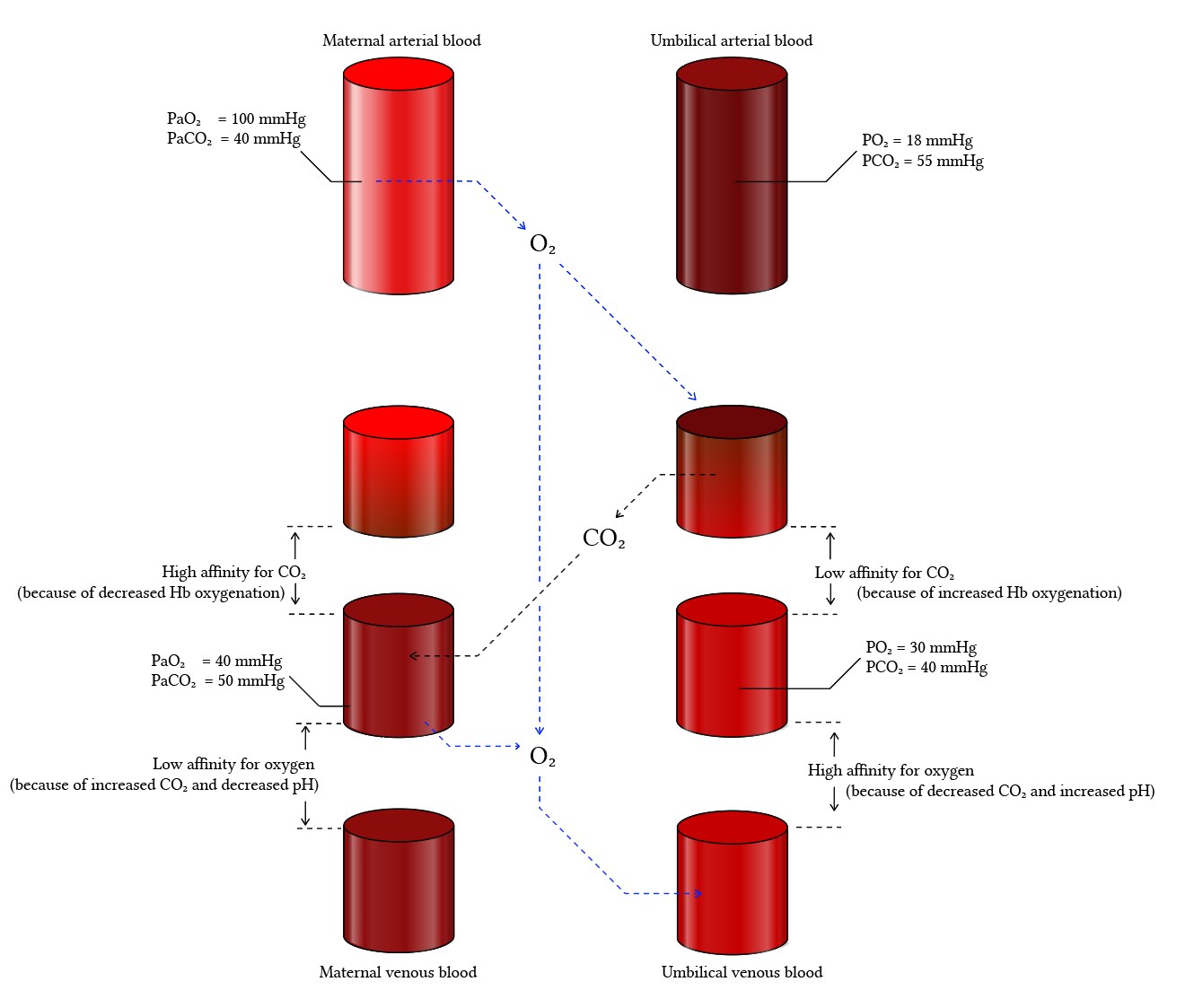 Clemetson, C. A. B. "The oxygen saturation of umbilical artery and vein blood at birth, with special reference to cord obstruction [abridged]." (1953): 94-98.

Zhang, Yan, et al. "The cooperativity of human fetal and adult hemoglobins is optimized: a consideration based on the effectiveness of the Bohr shift." Zoological science 20.1 (2003): 23-28.

Armstrong, L., and B. J. Stenson. "Use of umbilical cord blood gas analysis in the assessment of the newborn." Archives of Disease in Childhood-Fetal and Neonatal Edition 92.6 (2007): F430-F434.