Modern mechanical ventilators are at their most basic level systems which control the concentration and flow of gas into patients. As such, the mechanisms and circuit components used to exert this control seem like something important, something intensivists and anaesthetists should know. On the basis of this reasoning, in order to pass the CICM Workplace Competency Assessment for “Ventilation”, a successful trainee who “identifies the components of a ventilator circuit and describes their role” would surely have to at least mention the the methods used to control gas concentration and flow delivery, as these are crucial components.

So, without much guidance from bodies responsible for professional accreditation, what would be a sensible minimum of knowledge for this subject? One hopes the following brief summary is enough.

As already mentioned elsewhere, in most circumstances gas is supplied to the mechanical ventilator from a wall outlet, a pressurised gas cylinder, or a blower turbine. In order to have some influence over what flow and pressure one is using in the respiratory circuit, one needs to put some sort of variable-aperture obstacle in the path of gas flow. These days this is accomplished by means of a solenoid valve. 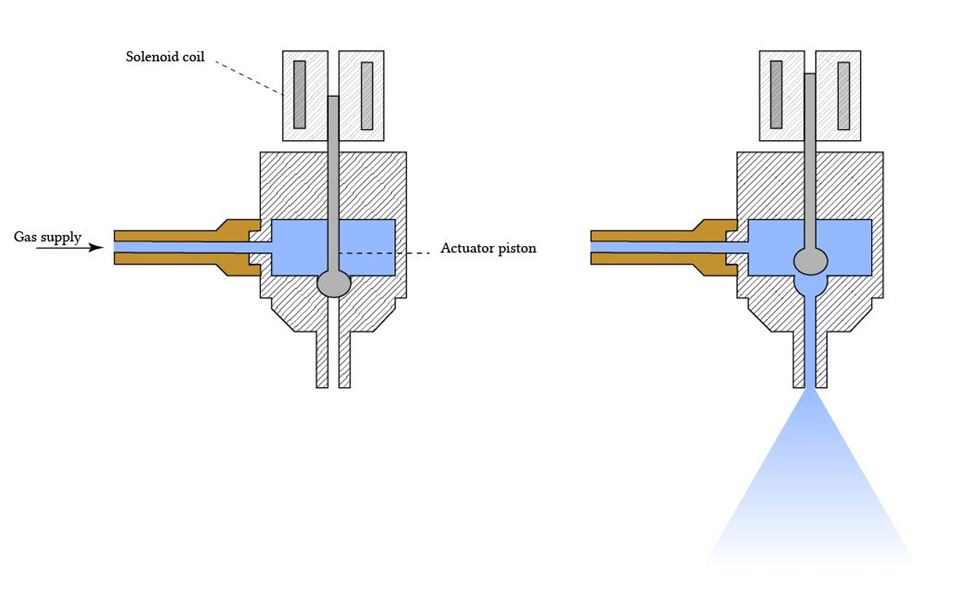 The level of engineering sophistication in the solenoid valves of modern-day ventilators is such that their “resolution” is measured in 0.5L/min. In other words, the valve can open in increments small enough to change the flow rate from 20.0 L/min to 20.5 L/min, an adjustment which is minuscule given that inspiratory flow rates for most modes of ventilation require peak inspiratory flow rates in excess of 60L/min. These valves can make these tiny incremental changes to flow in the timescale of 4-10 milliseconds, varying their aperture from 1.2 to 14.4 mm2 (Tassaux et al, 1999). The combination of such rapid and precisely acting expiratory and inspiratory solenoid valves is used to generate the whole range of flow and pressure waveform contours which you are accustomed to seeing on the monitor.

In the vast majority of cases, the inspiratory gas flow is expected to consist of something other than pure air or pure oxygen, i.e. a gas mixture is usually prescribed. For the gases to mix, a gas blender of some sort is required. This is usually a chamber connected to two solenoid-controlled valves, each of which regulates the flow of either air or oxygen. Typically these vaves arre connected in a manner which relates their opening to one another, such that the opening of one valve to 100% of the desired flow rate results in the complete closure of the other valve. This sort of arrangement is called a proportional valve system, and it is used in most ICU ventilators. 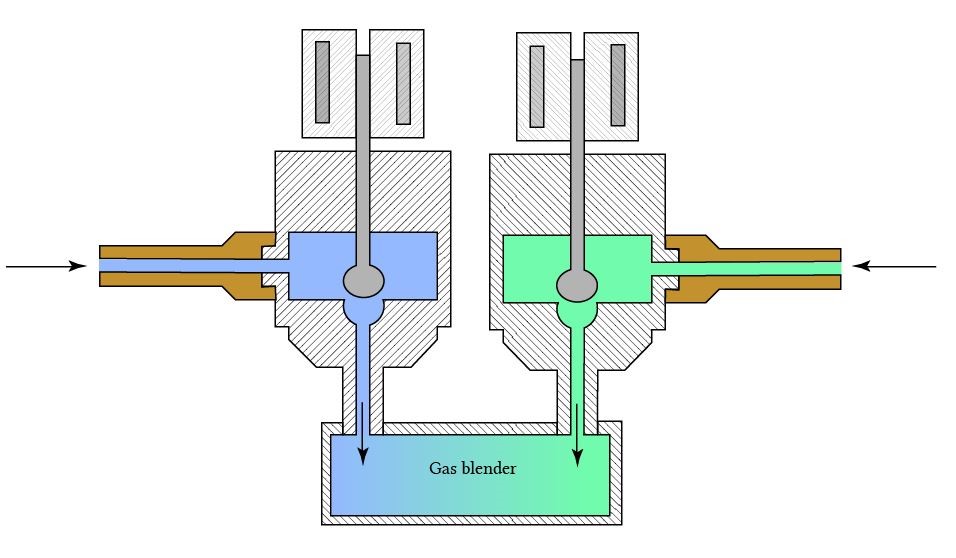 There is another method of controlling inspiratory air concentration without a stable compressed air supply, which is used by small portable ventilator models, for example the indestructible and seemingly omnipresent Oxylog 3000 model. If anybody has ever had to set one up, one might have noted that this device does not have anywhere to plug the air hose. And yet, there is a knob which has “FiO2” written on it, giving you the impression that some sort of control over the gas mixture is possible. How could this be?

Well. Even though there is some opportunity to mix air with the oxygen, one should not be deceived by the graded control between 40% and 100% FiO2  Though the Oxylog user’s manual describes control over the  inspired gas fraction as “infinitely variable”, the reality is that the precision of this gas blender is highly dependent on the total flow through the system. The manual produces this graphic to illustrate the relationship between achievable FiO2 concentration and total gas flow:

As one can see, the range of gas flows over which the Oxylog gas “blender” works properly is fairly narrow. At low oxygen flows, minimal air is entrained into the device (there is not enough vacuum) and though the dial might be set to 40% FiO2 the actual patient-end concentration of the gas mixture is going to be pretty much 100%  oxygen if the flow rate is 5 L/min or less. Similarly, with increasing oxygen concentration, there comes a point where the air intake cannot keep up with the roaring torrent of oxygen, and the FiO2 creeps up again. Though the graph above seems to suggest that between 9 and 35 L/min you get a reliable accurate FiO2, in actual fact there is probably quite a lot of variability, which makes any choice between 40% and 100%  into something of a gamble.