This chapter addresses section F10(i) of the CICM 2017 syllabus document, “Describe the physiological consequences of intermittent positive pressure ventilation and positive end-expiratory pressure”. This chapter specifically addresses the cardiovascular effects which were asked about in Question 20 from the second paper of 2019.  In short, positive pressure ventilation affects preload, afterload and ventricular compliance, and the  effect in most situations is a decrease in cardiac output. However, the effect may be beneficial in the context of decompensated heart failure, where the decreased preload and afterload result in a return to a more productive part of the Starling curve. In this rests the chief benefit of CPAP in the management of acute pulmonary oedema.

Mechanisms affecting the right ventricle and the pulmonary circulation are:

Mechanisms affecting the left ventricle and the systemic circulation are:

The consequences of this are:

Classical articles on this subject are Cassidy et al (1979) and Luce (1984), but these are paywalled by the powers that be. Something more recent, and more importantly free, is the article by Duke (1999), made available to all by CICM.

Effect of PEEP on preload

Here is a crude hydrodynamic representation of the intrathoracic circulation (well, everything up to the pulmonary veins, anyway). The pressures are all in cm H2O to aid comparison with respiratory pressure, even though conventionally the pressure of blood is measured in millimetres of mercury. PEEP is essentially end-expiratory positive intrathoracic pressure. This influences the return of venous blood to the heart.

In a patient who is slightly underfilled, venous return is still adequate in the absence of PEEP, because the CVP is still higher than the (mostly) negative thoracic pressure.

Indeed, with inspiration, that pressure becomes even more negative, and blood is actively sucked into the chest. 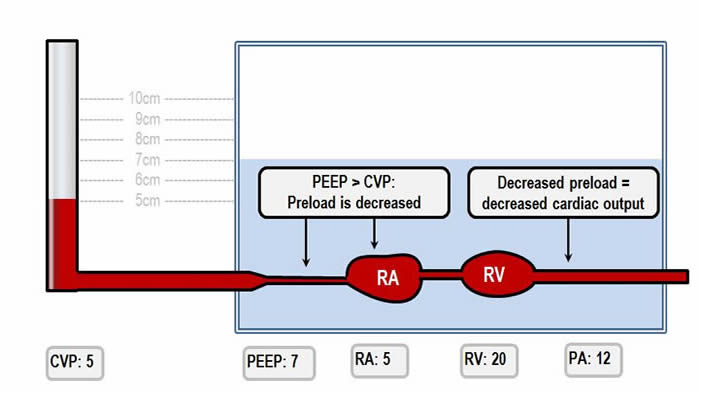 The PEEP is higher than the CVP, and venous return is impaired. On echo, the right atrium and IVC will appear collapsed.

This decreased preload will result in a decrease in cardiac output.

Obviously, one can adjust for this effect by increasing the CVP; another words, you can give your patient fluids and expect a decrease in positive pressure related hemodynamic effects.

Conversely, you can make use of this as a diagnostic tool, and surmise that the patient in whom PEEP produces hemodynamic instabilty is an underfilled patient.

These are oversimplified diagrams. In fact, PEEP is not transmitted directly to the venous system. In a lung with normal compliance, no more than 25% of the PEEP is transmitted to the central veins. But however small, there is still an effect. And of course nobody in the ICU has normally compliant lungs... In order to function normally, the right ventricle needs to generate enough pressure to overcome the sum of PA pressure and PEEP.

Consequently, if the PEEP is too high, the right ventricle will begin to fail due to increased afterload.

The fact that by this stage preload is also decreased doesn't help. The net effect is to cause greatly diminished cardiac output.

These diagrams all refer purely to the right side of the heart.

As a result, left ventricular preload is decreased even more, and cardiac output decreases.

Spontaneous ventilation is surprisingly unfavourable for LV workload, given that it is the "natural" state of affairs. However, if we view LV afterload  as "all of the factors that contribute to total myocardial wall stress (or tension) during systolic ejection", we observe that the negative pressure generated during a spontaneous breath is actually a disadvantage for the left ventricle.

In order to discuss this, we may separate afterload into the LV transmural pressure (which describes the wall tension of the LV, and therefore afterload) and the pressure differences between the intrathoracic and extrathoracic vascular compartments.

The healthy spontaneously breathing patient with good lung compliance and normal tidal volumes  generates a negative pressure in the realm of 1-2 mmHg, which is miniscule compared to the pressures generated by the mighty left ventricle (given that normally one must generate a pressure of around 80 mmHg just to open the aortic valve). The effect of increased LV preload due to spontaneous inspiration is in fact far more important, and tends to increase the stroke volume. The tiny increase in the afterload is lost in the noise, and the net effect is still positive.

This diagram exaggerates the spontaneous respiratory effort by tenfold in order to make the calculations more impressive, but this is unintentionally demonstrating what occurs in (for example) acute pulmonary oedema. Decreased lung compliance demands more negative pressures to achieve the same tidal volume, with disastrous effects on the LV transmural pressure. In this instance, the difference between intra-LV pressure and intrapleural pressure increases the LV transmural pressure, and therefore the afterload is also increased.

Additionally, putting positive pressure on the intrathoracic aorta causes a pressure gradient to develop between this vascular compartment and the extrathoracic circulatory system (which is under atmospheric pressure). The resulting gradient favours the flow of blood into the systemic circulation, also decreasing LV workload.

So, given that the influence of intrathoracic pressure on LV afterload and aortic pressure gradients is so small, which actually contributes to the afterload reduction?

The best answer I have found is probably from Luecke, Thomas, and Paolo Pelosi ("Clinical review: positive end-expiratory pressure and cardiac output").   They write:

"In contrast to its effect on the right ventricle, PEEP has been shown to decrease LV afterload. PEEP increases the pressure around structures in the thorax and, to a lesser extent, in the abdominal cavity, relative to atmospheric pressure. Because the rest of the circulation is at atmospheric pressure, this results in a pressure differential, with most of the systemic circulation being under lower pressure than the left ventricle and the thoracic aorta. Thus, increased ITP, at constant arterial pressure, decreases the force necessary to eject blood from the left ventricle in a manner exactly analogous to decreased arterial pressure, at constant ITP "

The paragraph then goes on to discuss the difficulties in defining and measuring LV transmural pressure, particularly how it would vary in the presence of a dilated myocardium. The authors conclude that "it is difficult to assess whether the PEEP-induced afterload reduction is actually due to a reduction in LV end-systolic transmural pressure or simply related to the commonly observed decrease in mean arterial pressure."

Now, this updated section owes its existence to Ben, who correctly pointed out some rage-inducing errors in my previous interpretation of LV transmural pressure. I tried to thank him directly, but he left an inaccurate email address, and therefore Address resolution of uoguelpg.ca. failed: Domain name not found.

Anyway. This is the sequence of events which causes left ventricular failure to spiral out of control. 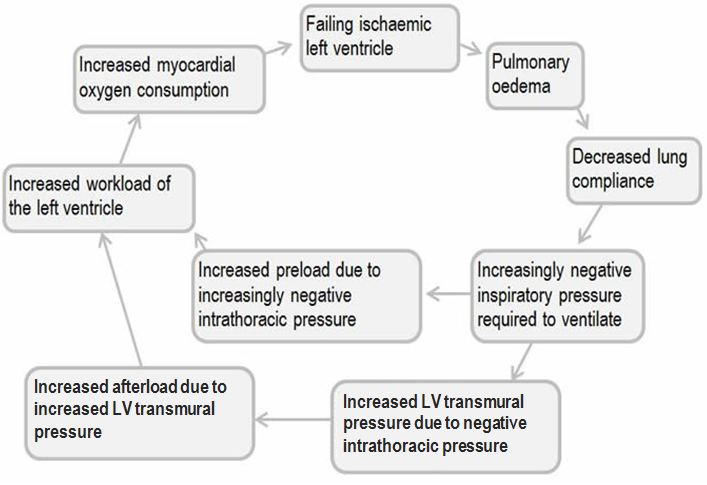 PEEP puts an end to this cycle by fighting the increasingly negative inspiratory pressure. The end-expiratory pressure increase decreases the preload and afterload, decreasing the demands on the left ventricle, and pushing it into the more efficient part of the Starling curve.

Most of this information comes from only two textbooks. With "Basic Assessment and Support in Intensive Care" by Gomersall et al (was well as whatever I picked up during the BASIC course) as a foundation, I built using the humongous and canonical "Principles and Practice of Mechanical Ventilation" by Tobins et al – the 1442 page 2nd edition.

Oakes, Dennis L. Physiological Effects of Positive Pressure Ventilation. AIR FORCE INST OF TECH WRIGHT-PATTERSON AFB OH, 1992. -this is somebody's Masters of Science thesis! They received their degree in 1992, but one expects that the fundamentals of physiology have remained the same since then.