Mandatory and spontaneous modes of ventilation

The trigger phase variable is said to determine whether a mode of ventilation can be described as "mandatory" or "spontaneous", but there is more to the “spontaneousness” of a mode. Generally, the patient is also given some control over how the breath is terminated (i.e the cycling variable is anything other than time-cycled). There may be even more input from the patient (for example, NAVA proportions the level of ventilator support according to diaphragmatic contraction). In contrast, mandatory modes of ventilation take this control away, in return for a totally effortless respiratory experience where you just lie back and let the blower do the work.

To compare mandatory and spontaneous modes of ventilation on any level would therefore seem quite stupid, given that they are completely different in every way. However, it is important to know advantages and disadvantages of either, because this has implications for one’s decisions, particularly in scenarios where either mode seems appropriate

From an exam point of view, this topic is rather irrelevant for the purposes of the CICM primary and does not appear in their 2017 syllabus. It does however have some importance for CICM WCA competency “Ventilation” which expects the trainees to be at least “adequate” at “outlines the differences between mandatory and spontaneous modes of ventilation”. This chapter addresses this apparent need.

In the event that this topic is of any interest to anybody, the action of reading about it should be rewarded with the recommendation of some peer-reviewed resources. No article anywhere does anything directly comparable because presumably all authors in the field have come to the conclusion that these matters are so self-explanatory that nobody would ever need to have this material presented to them. If one needed to read anything “official” about this topic, one would probably benefit most from the 2016 article by Kacmarek and Branson, titled “Should Intermittent Mandatory Ventilation Be Abolished?” The authors debate the merits of IMV, which is a largely obsolete mode of ventilation; but their comparison of IMV with spontaneous ventilation is informative.

The advantages of a mandatory mode of ventilation

In an effort to reduce the uncomfortable mandatory-ness of mandatory ventilation while retaining the comfortable security of time-triggering, manufacturers included a means of synchronising mandatory breaths with the patient's effort. Apparently the SERVO 900B was among the first machines to offer such a thing in the 1980s. By 1990, it was well known - enough to be included in this article on the history of mechanical ventilation by Young & Sykes (1990).

In essence, this is still a form of time-triggering. You set a rate and a volume on the ventilator. As such, there are timed breaths. However, there is a window of opportunity around each timed breath. During these windows, a patient effort will be converted to one of those mandatory breaths. 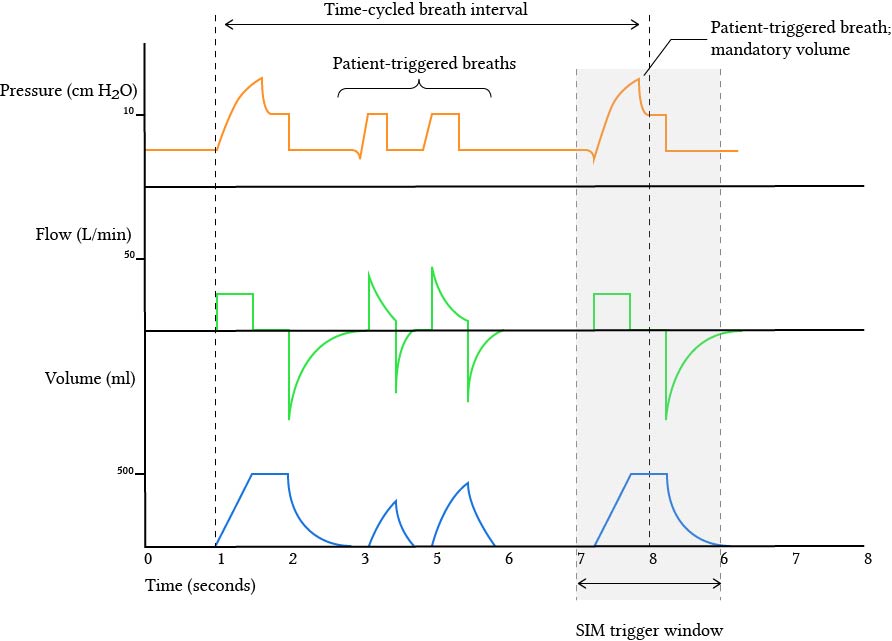 The theory behind this is fairly straightforward. The normal mandatory modes are guilty of neglecting patient breathing efforts, and spontaneous modes are insufficiently supportive of poor or inconsistent efforts. SIMV was supposed to bridge between the two. Back in the day, weaning on a mandatory mode was done by gradually decreasing the ventilator rate and allowing the patient to take over. SIMV allowed synchronised breaths up to a certain rate

Williams, Kathleen, Marina Hinojosa-Kurtzberg, and Sairam Parthasarathy. "Control of breathing during mechanical ventilation: who is the boss?." Respiratory care 56.2 (2011): 127-139.

Shelledy, David C., Joseph L. Rau, and Lynda Thomas-Goodfellow. "A comparison of the effects of assist-control, SIMV, and SIMV with pressure support on ventilation, oxygen consumption, and ventilatory equivalent." Heart & Lung: The Journal of Acute and Critical Care 24.1 (1995): 67-75.