Function of the proximal tubule

This chapter seems relevant to the aims of Section H3(i) from the 2017 CICM Primary Syllabus, which expects the exam candidate to "describe ... tubular function". It only exists because, following from the chapter on glomerular filtration, it seemed reasonable to move on to the proximal tubule, as a part a logical sequence of works which could now probably be loosely characterised as Alices' Adventures Through the Uriniferous Tubules. This chapter is somewhat superfluous from an exam perspective, as the CICM examiners don't seem to care what happens in the proximal tubule, and so these tidbits of information are offered here in the same "make of it what you will" spirit as the rest of Deranged Physiology.

Of all the irrelevant tidbits, the most valuable bits of tid are as follows:

In terms of reading about this part of the nephron, one could strongly recommend Curhoes & Moe (2014). Though their article was supposed to focus specifically on the acid-base roles of the proximal tubule, they tend to go on a few tangents which accidentally happen to explain other aspects of renal physiology, which is useful. Welling & Welling (1988) is also an excellent resource, particularly for the structure and function relationship. A chapter from Brenner is also somehow available for free via doctorlib.info, and there is enough well-referenced proximal tubule material there to seriously consume an afternoon or two.

Performance characteristics of the proximal tubule

The glomeruli of a pair of healthy kidneys turn 20% of its 1L/min blood flow into glomerular ultrafiltrate, which means the proximal tubule receives up to 200ml/min of fluid input, which works out to be 12L/hr or 288L/day.  Apart from this unimaginably vast volume, the ultrafiltrate is full of goodies. Consider that the composition of the glomerular ultrafiltrate is basically that of deproteinated plasma. Harris et al (1974) micropunctured some rat tubules and determined that the concentrations of sodium chloride and phosphate was basically the same as in the blood. Only calcium concentration was different, about 40% lower than that of plasma, largely owing to the fact that calcium circulates partially bound to albumin, and only the free fraction would get filtered. On top of that, bicarbonate and all the other slightly-larger-but-still-small molecules such as amino acids water-soluble vitamins and glucose also end up in the ultrafiltrate. The proximal tubule heroically reclaims these treasures for the organism. Over its transit through the proximal tubule, 60-70% of the water is reclaimed, 60-70% of the salt is reclaimed, and most of the organic nutrients and bicarbonate are also returned into the circulation. The cells of the proximal tubule are singlehandedly responsible for reabsorbing all the protein and peptide fragments that managed to sneak across the glomerular border. Amid all that activity, the cells of the proximal tubule manage to find the time to contribute essential metabolic activities, such as the activation of Vitamin D.

Structure of the proximal tubule

According to the nomenclature outlined by Kriz et al (1988), there are several geographical territories even in this little patch of glomerular real estate. Specifically, you have:

Representing this diagrammatically, with the measurements borrowed from Welling & Welling (1988),

Of course, that fat brown toothpaste-looking tube in the diagram is completely unrelated to the true scale and shape of this thing. For a true geometrically accurate representation of this part of the tubule, we can turn to Zhai et al (2006), whose 3D reconstructions of micro-sliced mouse nephrons can give us a true sense of scale and length: 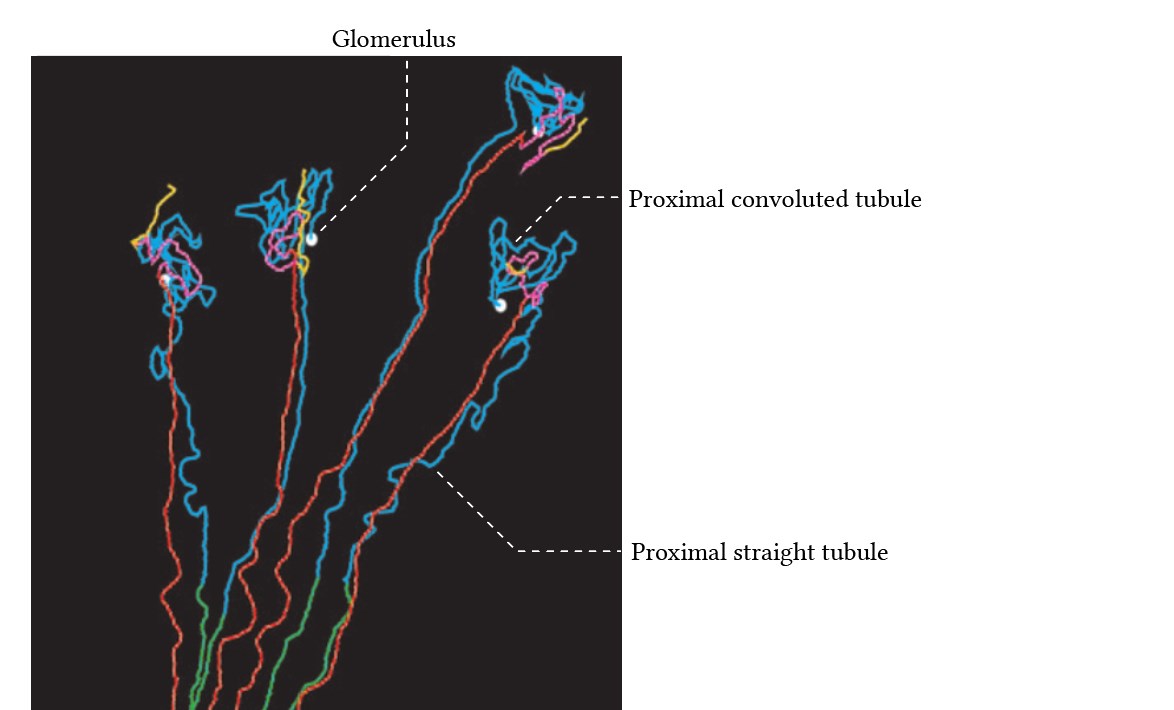 In short, the most important features of the proximal tubular cells are:

The sides of the cells, where they connect to one another, are topographically quite complex, in a way that maximises their lateral membrane surface area. At the apex, the cells are connected with each other via rather simple smooth membranes, but as you go further from the tubule lumen, you see the lateral membrane connecting these cells become more and more convoluted. To borrow the words of Welling & Welling,

"...if the lateral cell membranes are seen as draperies or continuous sheets of fabric, the dimensions and area of that fabric increase greatly toward the base, much like a flaring skirt with a narrow waist"

Each basal cell therefore looks like some kind of marine echinoderm, with tiny branching foot processes interlocking with those of a neighbouring cell: 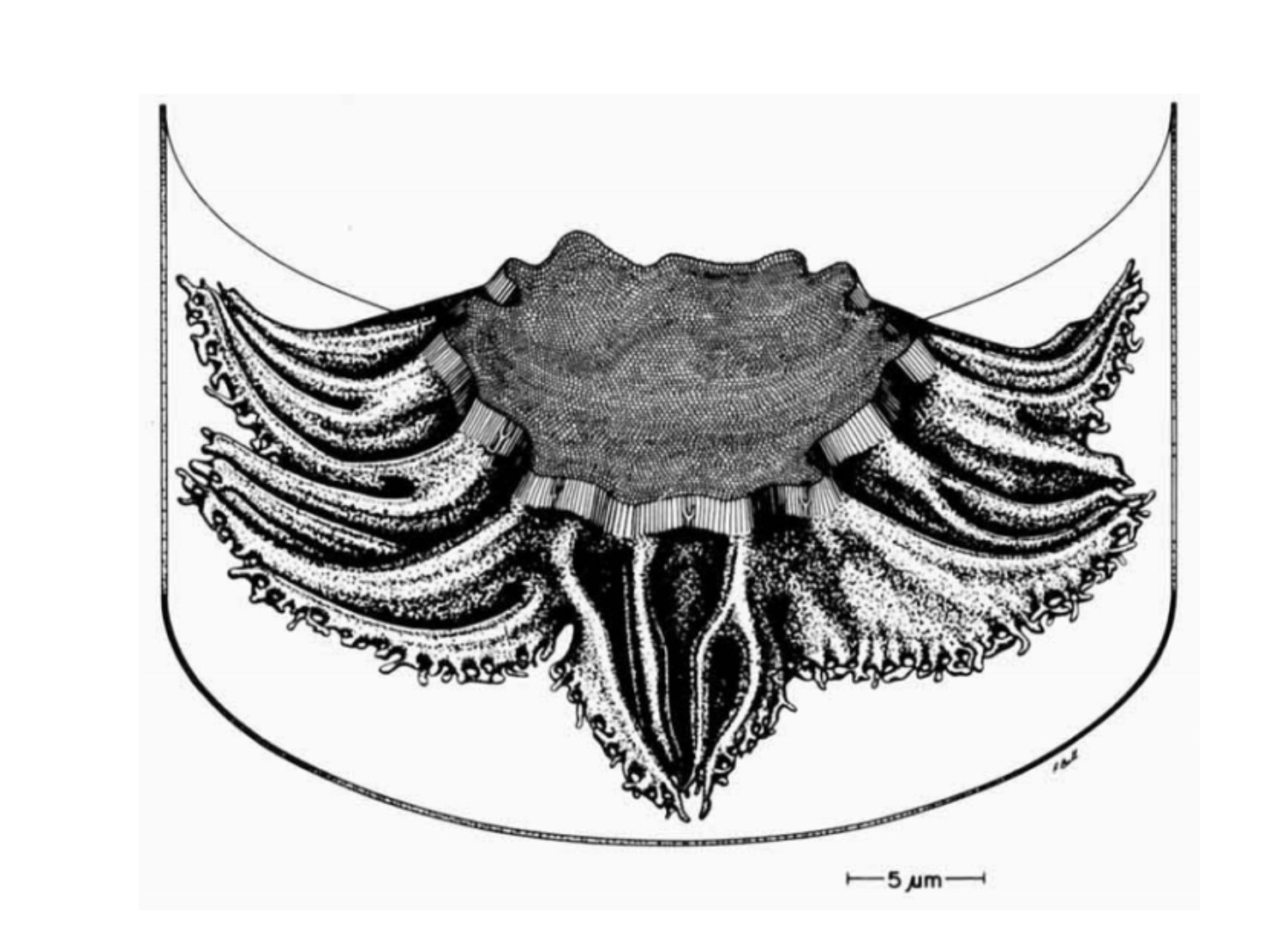 With some heroic maths and laborious manual measurement of electron microphotographs, Welling & Welling were able to estimate that the basal 20% of the cell's height account for 75% of its total basolateral surface area. In an earlier study (Welling & Welling, 1975) they had determined that the total apical (microvillous) surface area and the total basolateral surface are of the proximal tubule are both roughly the same, or about 2.9 mm2 for every 1mm of tubule length (that's about 300 cells). Given that the height of the cells is about 7μm, it becomes clear that even though they might appear like simple cuboidal epithelium under the microscope, functionally they are really just discs with an impossibly huge apical and basal surface area.

Absorption in the proximal convoluted tubule

The events and activities in the proximal convoluted tubule are so numerous that it is easy to get lost in them. What follows is an oversimplification, made necessary by the need to remain sane.

Basolateral Na+/K+ ATPase activity is massive in scale. The proximal tubule cells have a vast basolateral surface area, and it is bristling with these ATP-powered pumps. According to this nice bar graph from Doucet (1988), the proximal convoluted tubule is where this activity is maximal (at least in the proximal nephron).

The Na+/K+ ATPase is used to generate a sodium gradient.  The constant removal of sodium from the basolateral surface allows the constant movement of sodium out of the tubule lumen. With the ATPase pumps so numerous, the flux of sodium can be truly massive in scale. This makes sense, as the proximal tubule might see about 28,000 mmol of sodium per day.

This gradient for sodium is used to co-transport basically everything else. Numerous apical co-transporters exist, acting either to symport anions or antiport cations. For example, anionic amino acids and glucose are co-transported, whereas hydrogen ions are exchanged. The number, diversity and function of these channels boggles the imagination. For the bewildered CICM trainee, it is not essential to know each and every detail here. The main fact to internalise is that the movement of sodium is required for the movement of all the other solutes.

As already mentioned, there's no need to laboriously memorise every apical transport protein, but there's a few worth knowing about. Some of these are drug targets, some are uniqye to the proximal tubule, and some are necessary for the understanding of other aspects of renal physiology. In short:

The specifics of that acid-base manipulation here will be left for another chapter, but, in order to simplify revision, one may be reminded that the proximal tubule is where brush border carbonic anhydrase is responsible for the reabsorption of bicarbonate, which it converts into CO2. This is the step susceptible to pharmacological manipulation (by acetazolamide), and the site of type 2 renal tubular acidosis:

The co-transport of sodium out of the tubule lumen decreases tubular fluid osmolality, as compared to that of extraluminal fluid. This produces a net movement of water out of the tubule, by all sorts of pathways. Some movement is paracellular (through the supposedly tight junctions) and some is facilitated by aquaporins in the apical membrane. As the result of this, the tubular fluid remains iso-osmolar over the length of the proximal tubule. When Gottschalk & Mylle punctured some rat tubules in 1959, they found that the tubular fluid osmolality was basically the same as the osmolality of the glomerular filtrate.

The net effect of all this is on the composition of the tubular fluid is best described by this relatively famous graph from Rector (1983): 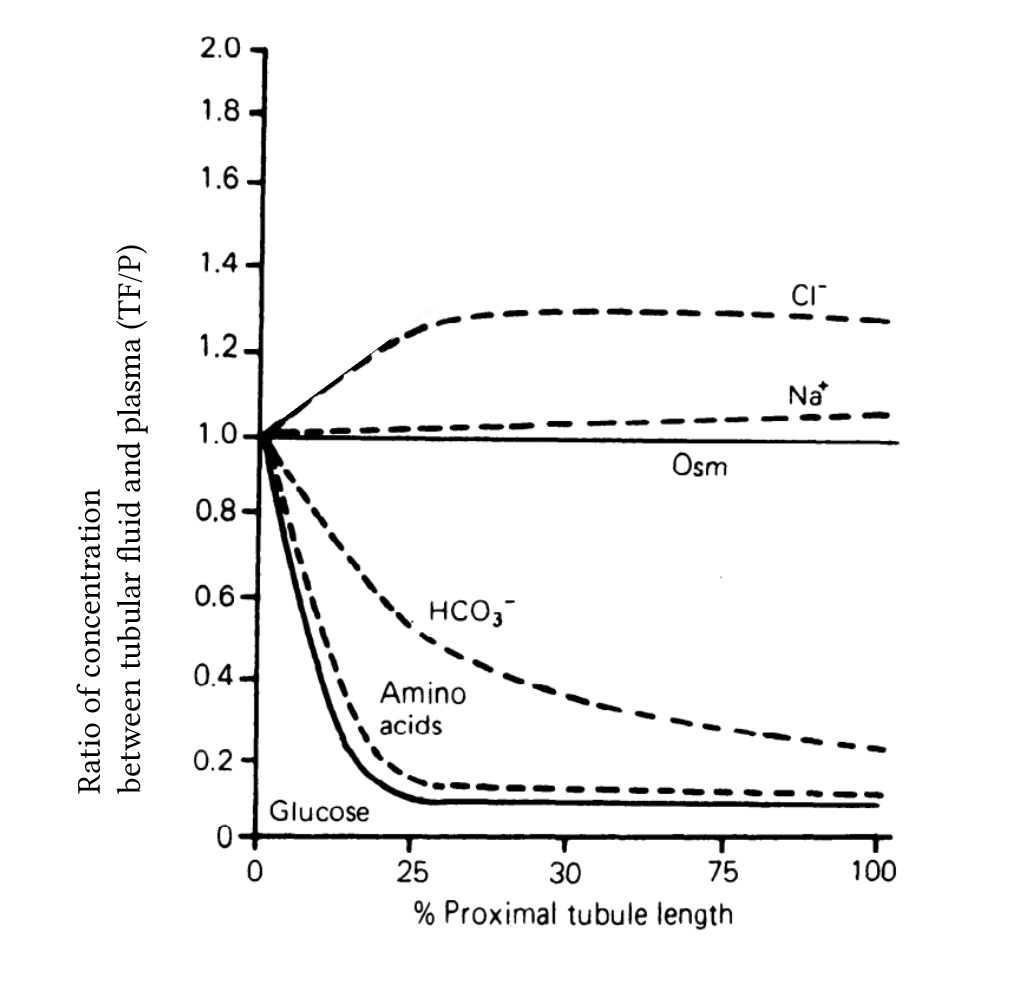 The reason for the relative increase in tubular chloride concentration is largely the need to maintain electroneutrality, as other anionic solutes (amino acids, bicarbonate) are extracted and there is a net loss of negative charge.

Additionally, absorption of large solutes occurs by vesicle-mediated pinocytosis in the proximal convoluted tubule. This is how stray protein and albumin is usually cleared from the proximal tubule fluid. The numerous endosomes seen in these tubular cells are full of this debris.

Unlike the heavily brush-bordered convoluted segment, this part of the tubule is mainly concerned with the elimination of things which might not have been filtered particularly well at the glomerulus, but which are nonetheless important to be rid of. This is the site of active secretion for many xenobiotic molecules, such as drugs and heavy metals. It is also the part of the nephron which is most easily damaged by various "nephrotoxins". The anions of interest are collected out of peritubular capillary blood by OAT-1, the Organic Anion Transporter (and yes, there is a corresponding OCT-1 for cations). OAT-4 at the apical membrane then ejects these unwanted substances into the tubular fluid.

Wang & Kestenbaum (2018) list a whole ton of these substances which undergo active secretion here, of which some important ones are:

Doucet, A. "Na-K-ATPase: general considerations, role and regulation in the kidney." Advances in nephrology from the Necker Hospital 14 (1985): 87-159.