The loop of Henle

This chapter seems relevant to the aims of Section H3(i) from the 2017 CICM Primary Syllabus, which expects the exam candidate to "describe ... tubular function".  Even though the college have never asked a direct question about this, they do certainly seem to love the countercurrent mechanism, which is what the loop of Henle is all about. The point of this part of the nephron is the countercurrent multiplier mechanism which manufactures a hypertonic environment in the renal medulla. This is also where frusemide exerts its effect. These topics are so important that they get their own chapters, which results in a ridiculous paradox where, in a chapter on the loop of Henle, the author does everything possible not to discuss loop diuretics or countercurrent concentration.

Now, it is important to explain that, though seemingly every nephrologist in the world seems to have published a review article or book chapter on the loop of Henle, none of them could be recommended to the revising exam candidate for the purpose of briskly reminding oneself what happens in this part of the kidney. For instance, the excellent chapter by Pannabecker (2012) is 24 pages dedicated to this exact topic, but it is unfortunately drowning in detail. The time-poor candidate will not want to wade through several pages where different (often contradictory) study results are discussed. Where possible, relevant studies have been referenced at the end, with the expectation that, if this chapter was written right, nobody will ever have to read them.

Structure of the loop of Henle

When Friedrich Gustav Jakob Henle first published about this thing in 1866, he certainly did not know what the hell it did, but he was still able to describe it in great detail, and produced some excellent sketches. Or rather presumably some nameless artist did, as it is unlikely that Henly himself had illustrated any of his Handbuch der Eingeweidelehre des Menschen. 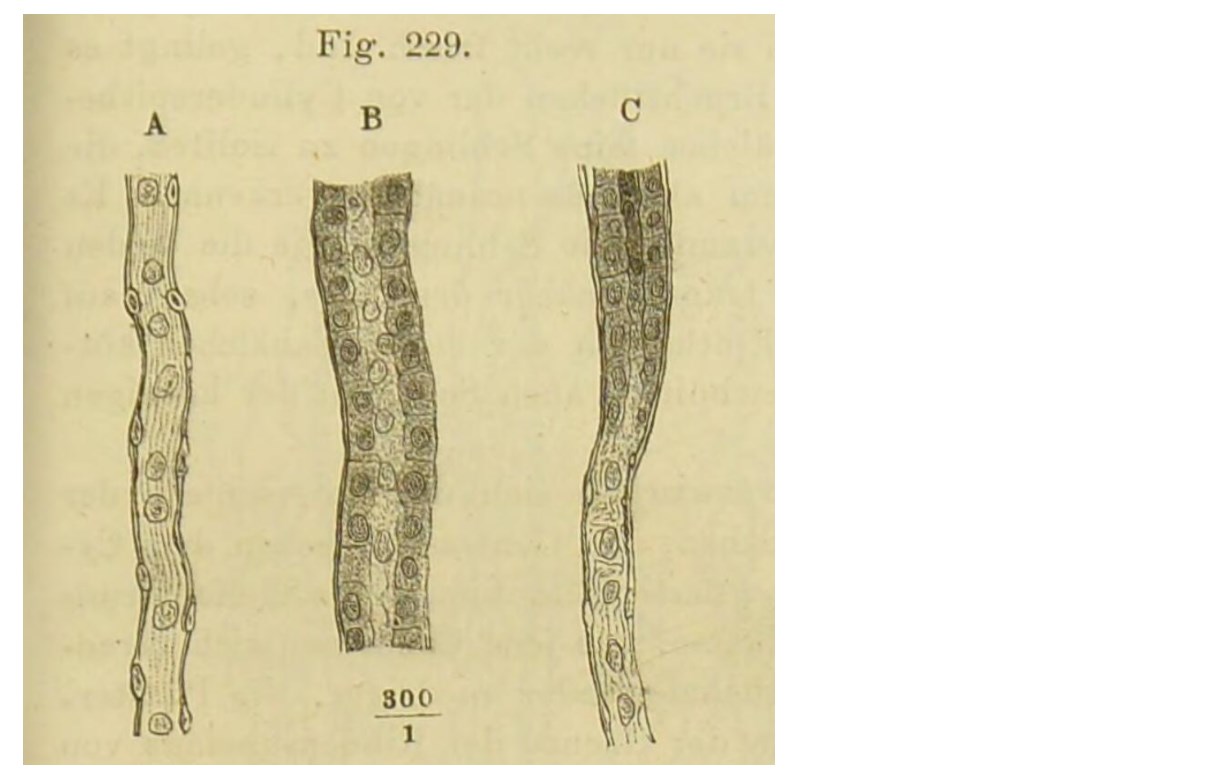 Kriz et al (1988) defined the boundaries of this structure as follows: 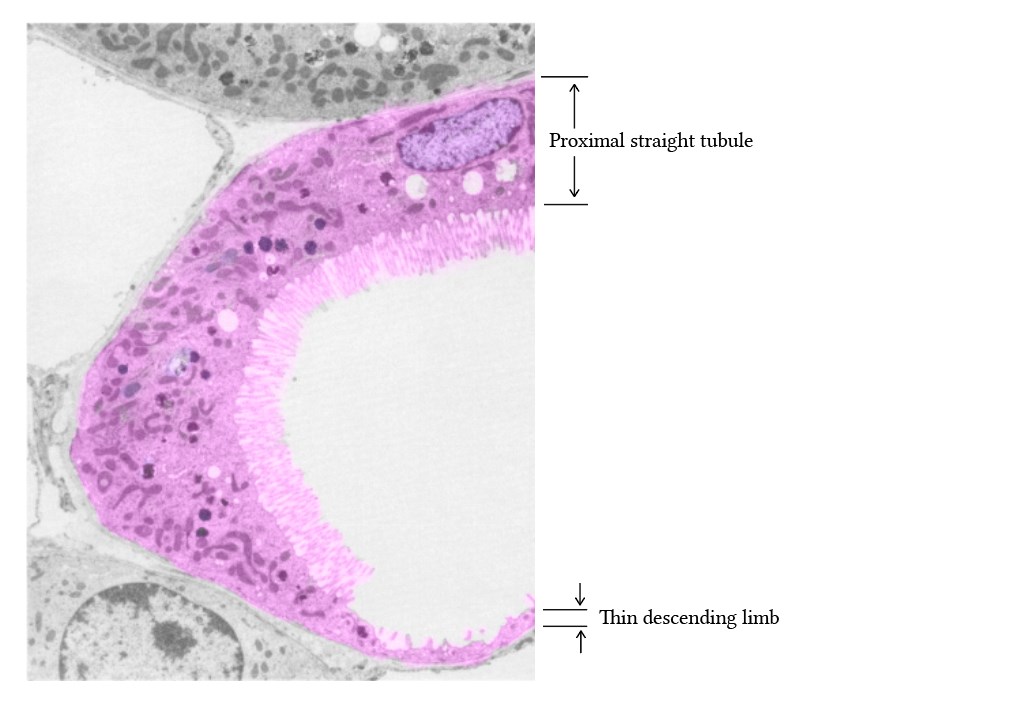 There's actually several different types of this flimsy thin cell layer, each with their own properties, and there are whole articles dedicated to their ultrastructure (eg. Pannabecker, 2012), but for the purposes of the CICM exam, that level of detail is probably unnecessary. More important is the functional distinction between the different cell types in this part of the tubule, which can be oversimplified in the following manner: 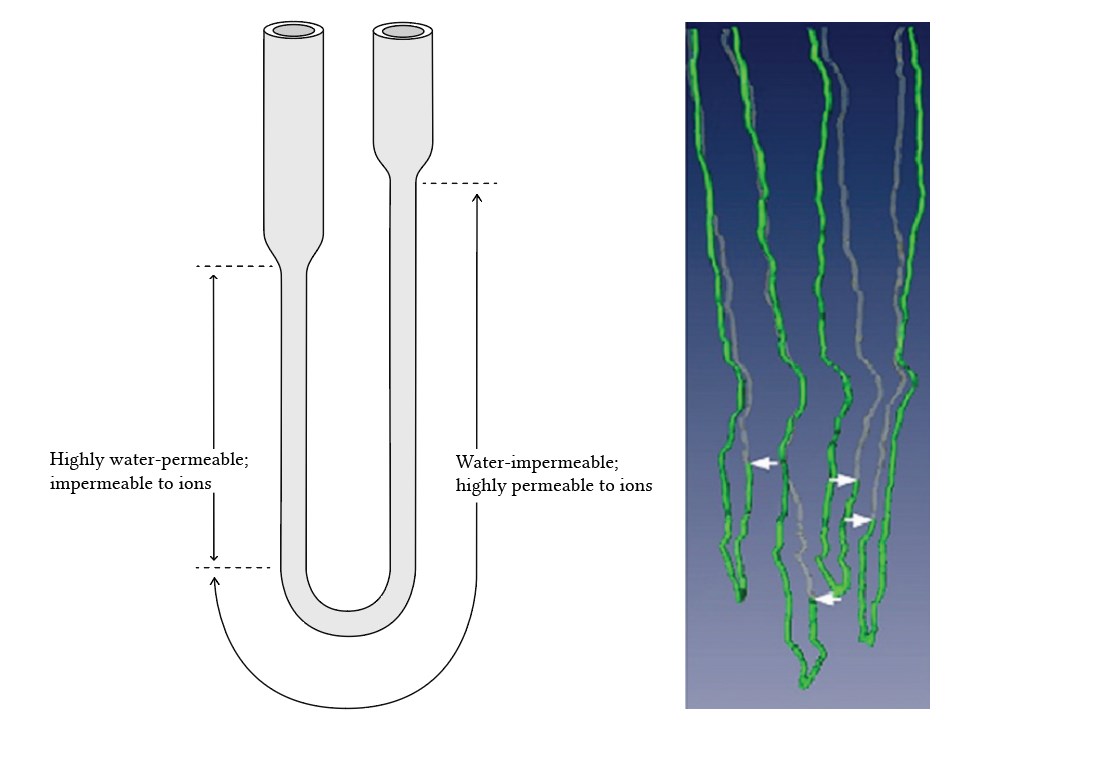 The image on the right is a 3D reconstruction of the loops of Henle (long nephrons) from Layton et al (2004); the green ascending segments were identified using an immunofluorescent marker specific for the CIC-K chloride channel, which only appears in the ion-permeable section of the tubule.

The thin descending limb is highly water-permeable. When Gottschalk al (1963) punctured a descending limb and injected a droplet of water, they observed that the droplet disappeared very rapidly. The exact permeability was later measured by Morgan & Berliner (1968), and it was about 120 × 10-5cm/sec. In case those numbers mean nothing to you, the authors helpfully measured the permeability of other segments of the tubule and reported their values:

So, in fact, the thin descending limb is even more water-permeable than a cortical collecting duct that has been soaked in vasopressin. This property is essential for the countercurrent mechanism responsible for the production of concentrated urine. As a large amount of water passes through the walls of this tubule, so do some solutes sneak across - this is thought to be a paracellular phenomenon (Imai & Yoshitomi, 1990), and is not considered to be especially important for either the mechanism of sodium or water reclamation.

At the beginning of the thin descending limb, tubular fluid closely resembles plasma in its osmolality and ionic composition. At the end of the thin descending limb, as it enters the hairpin bend of the loop, the tubular fluid is now highly concentrated. Most textbooks, when they discuss the countercurrent mechanism, usually give an osmolality of around 1200-1400 mOsm/kg, and this is probably close enough for government work. One might expect there to be a bit of inter-individual variability in this value, to say nothing of the variability between species, and that is in fact what is seen in comparative biology studies. Early hamster tubule micropuncture studies by Lassiter et al (1961) tend to give a value of around 900-1200 mOsm/kg, and later data from desert rodents showed something very similar. Borrowing some data from Taniguchi et al (1987), one is able to construct a graph that looks a little like this: 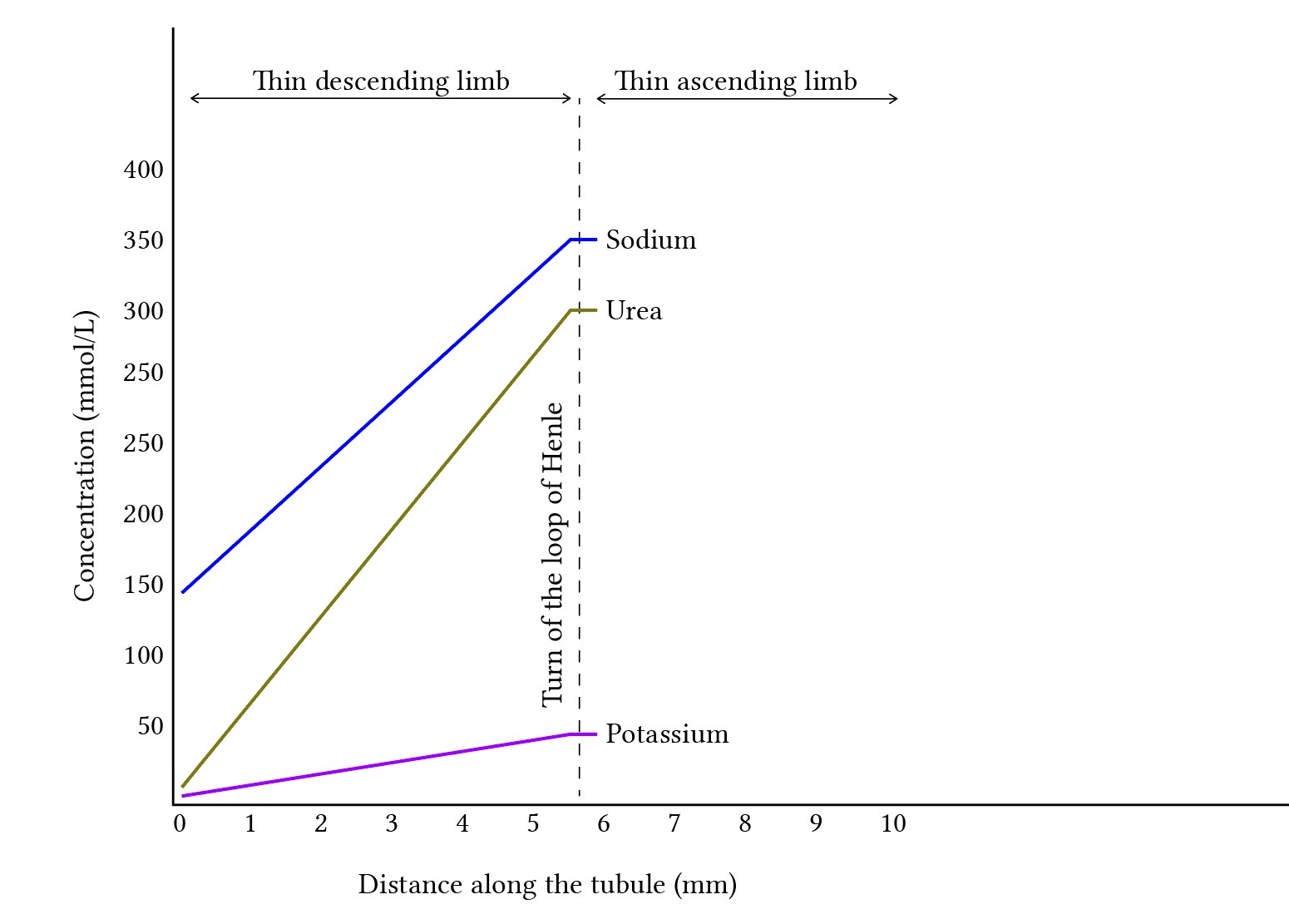 After the tubular fluid has concentrated maximally, it returns from the tip of the loop via the thin ascending limb. A change in the epithelium here produces a marked difference in water permeability., which means the water mainly stays in the tubule lumen. Then, some reabsorption of sodium takes place, and so the osmolality of the fluid drops, i.e some dilution appears to take place. When Jamison et al (1967) micropunctured two sites of the thin ascending limb (1mm apart), they found the total osmolality had decreased by about 120 mmol/L, which was almost entirely due to the reabsorption of sodium.

This reabsorption seems to be entirely passive in this part of the tubule, in the sense that nobody has ever been able to demonstrate the existence of active transport mechanisms. A clever experiment by Imai & Kokko (1974) in fact demonstrated the opposite. When the investigators bathed the thin ascending limb in an extracellular electrolyte bath which was identical in composition to the fluid being perfused into the tubule, there was no change in the tubular electrolyte concentration. "Active transport of salt by the tALH was not detected by the experimental protocol of the current studies, and ...the unique membrane characteristics of tALH allows for generation of osmotic  gradients... on purely passive mechanisms", they crowed giddily, as this supported their passive diffusion model of the countercurrent mechanism.

The overall movement of solutes and water throught the thin limb can be summarised as follows: 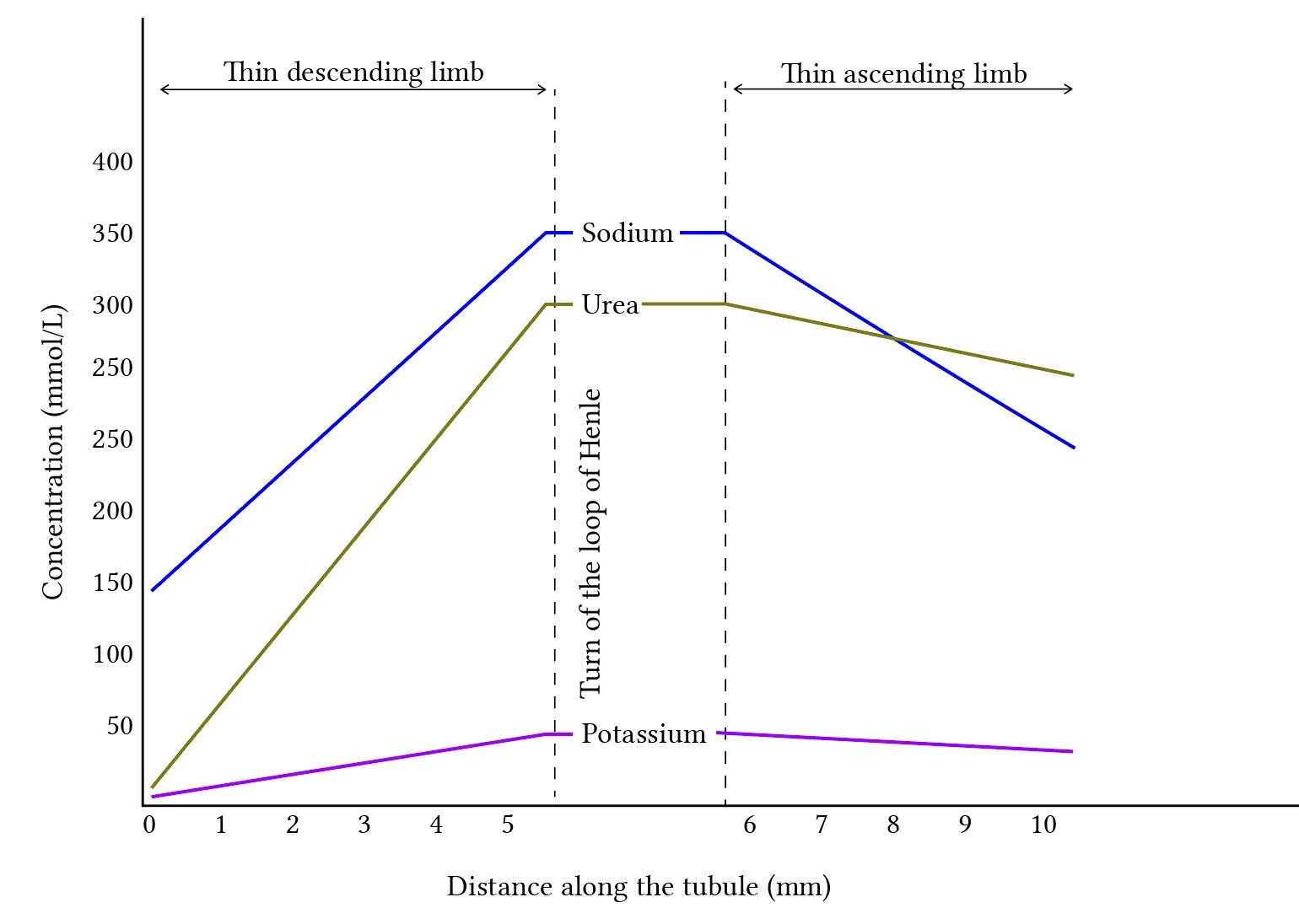 At the end of the thin ascending limb, about 3-4mm distal to the hairpin bend, micropuncture studies by Jamison (1968) revealed an osmolality of around 470-550 mOsm/kg, or up to one third of what it was at the hairpin bend.

This a fairly important part of the loop, as it contains several regions of interest. One is NKCC2, an electroneutral Na+ K+ and Cl- cotransporter which is the target of loop diuretics. The other is the macula densa, a "plaque" of tubular cells which sits near the vascular pedicle of the glomerulus and which coordinates tubuloglomerular feedback, among its other functions.

Characteristics of the thick ascending limb are as follows:

Thus, the thick ascending limb ends up reclaiming most of what sodium remains after the proximal tubule is done with it; about 20-30% of the ultrafiltered sodium is reabsorbed here.  This leads to a tubular sodium concentration of around 30-60 mmol/L (Ares et al, 2011), and an end-tubular osmolality as low as 90 mOsm/kg. Once sodium has been sucked up into the cell by the NKCC2 transporter, it is exported out again by Na+/K+ ATPase. Chloride follows through its own basolateral channels, driven by its electrochemical gradient (specifically, by the very negative intracellular potential). Some potassium also leaks back out into the lumen of the tubule via the ROMK channels (Welling & Ho, 2009).

This diagram and this discussion are mindless oversimplifications, the colouring book of physiological study. In case one has the appetite for greater detail, Mount (2014) describes this part of the tubule with extraordinary granularity. The more interesting topics in the function of the thick ascending limb (mechanism of action of loop diuretics, and the role of the macula densa) are interesting enough to be discussed separately in another part of this site.

Imai, M., and J. P. Kokko. "Sodium chloride, urea, and water transport in the thin ascending limb of Henle. Generation of osmotic gradients by passive diffusion of solutes." The Journal of clinical investigation 53.2 (1974): 393-402.

Welling, Paul A., and Kevin Ho. "A comprehensive guide to the ROMK potassium channel: form and function in health and disease." American Journal of Physiology-Renal Physiology 297.4 (2009): F849-F863.