This chapter seems relevant to the aims of Section H1(ii) from the 2017 CICM Primary Syllabus, which expects the exam candidate to "describe glomerular filtration and tubular function". Regionally specific questions about the nephron (eg. "what happens in this specific tubule") are virtually unknown in the CICM First Part exam, which means the trainees can safely ignore this entire chapter. It is made available here mainly for completeness.

The best article for this, and - for that matter - for all of the structure and function of the kidney - is "Structural organisation of the mammalian kidney" by Kriz & Kaissling. For something that deals specifically with the DCT, one cannot go past  Subramanya & Ellison (2014), and for a clear explanation of what intercalated cells do, one can read Roy et al (2015). It s of course pointless to do any of that, because CICM have never asked for this much detail.

Macula densa and the juxtaglomerular apparatus

At the distal end of the loop of Henle, as it reenters the cortical labyrinth after touring the pickled hell of the inner medulla, a mural "plaque" of cells is usually seen, which thickens the already thick ascending limb where it comes close to its glomerulus of origin. The most famous image of this area comes from a 1992 paper by Kriz & Kaissling; it is a particularly lucky section through the vascular root of a glomerulus, a version of which has been vandalised below: 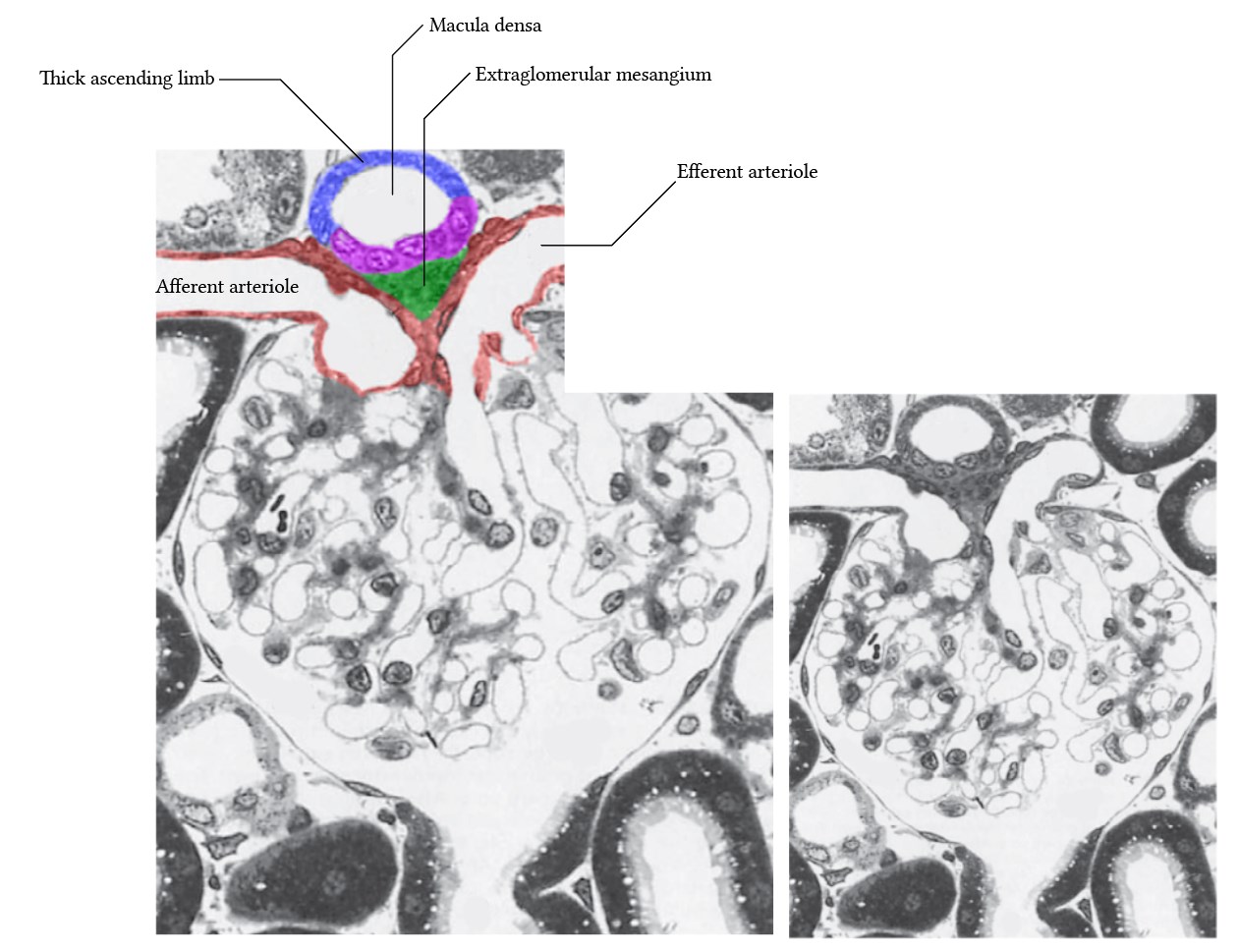 These are basically sensors that detect increased salt delivery to the distal tubule and use that signal to coordinate a series of regional and systemic responses which aim to decrease the aforementioned salt delivery. The sensor-effector mechanism itself is hellishly complex, and those who are interested are directed to a detailed overview in Bell et al (2003). To cut a long story short:

That is the basis of tubuloglomerular feedback, which is described better in an excellent paper by Volker Vallon (2003) and in the chapter on renal blood flow. The macula densa is also implicated in the humoral control of blood pressure, by mediating the release of renin through some apparently unknown mechanisms, where decreased salt intake produces the release of renin, and vice versa. For this structure-and-function-oriented chapter, it will suffice to say that this functionally important structure caps the topmost end of the thick ascending limb of the loop of Henle, just before it abruptly turns into the distal convoluted tubule.

This thing, though convoluted, is quite short. Even unfurled, Crayen & Thoenes (1978) got it to stretch about 1mm. The walls are even thicker than the thick ascending limb, made up of tall cuboidal cells full of mitochondria. Like the thick ascending limb and the proximal tubule, the basolateral part of these cells is topographically very complex, with multiple interdigitations. There's probably at least four different types of cells and they appear variably scattered in this segment, making it quite difficult to describe its boundaries histologically. Most early researchers described the extent of the distal convoluted tubule in terms of what it is not; i.e. it is whatever tubule is seen between the macula densa and whatever the next tubule is.

This area has some notable drug targets, which brings a bit of ICU-related clinical relevance to an otherwise forgettable chapter.

This forgotten and misunderstood segment of the nephron is a place where the last of the calcium absorption occurs.  In this day and age, its extent is defined by an overlap of apical proteins. There is the presence of the TPRV5 calcium channel and the aldosterone-regulated epithelial channel ENaC, which are already present in the distal part of the distal convoluted tubule, but there's now also the presence of vasopressin-mediated aquaporins which are present mainly in the cortical collecting duct.

Calcium reabsorption happens here by means of the TPRV5 channel, the expression of which is regulated by parathyroid hormone and 1,25-dihydroxyvitamin D3. This does not happen in the collecting duct, which is the only thing that makes the connecting tubule somewhat unique.

The sodium potassium and water handling by this part of the tubule is so similar to what happens in the collecting duct that it would be better to discuss them all together as "aldosterone and  vasopressin-regulated distal nephron".

The disappearance of calcium transport machinery (mainly the apical TPRV5 channel and the basolateral NCX exchange transporter) signals the transition of the connecting tubule into the collecting duct. This part of the tubule has couple of subdivisions, which have both geographical and functional differences:

This part of the tubule is functionally characterised by its sensitivity to aldosterone and vasopressin, which regulate the sodium, water and urea reabsorption here:

Sodium reabsorption here mops up whatever is left behind after the proximal tubule, the thick ascending limb and DCT are done with the tubular fluid. This final stage is mediated by the ENaC channel, expression of which is controlled by aldosterone. This is the drug target of spironolactone (which blocks aforementioned aldosterone mediated expression) and amiloride (which directly blocks this channel).

Potassium secretion in the collecting duct is also mediated by the ROMK channel, and like everywhere else in the distal nephron the potassium here is being pushed around by voltage gradients. If there is a significant aldosterone-mediated sodium reabsorption, potassium excretion is increased to maintain electroneutrality, and as the consequence potassium ends up being dumped along with the urine. The upshot of this is the association between hypernatremia and hypokalemia seen in hyperaldosteronism, and the association between hyponatremia and hyperkalemia seen in spironolactone use.

Water and urea reabsorption  in the collecting ducts is regulated by vasopressin, which activates the insertion of aquaporin and UT1-3 channels into the apical membrane. The former are prevcalent in the cortical duct, which allows the urea to be massively concentrated, and the latter are abundant in the innermost medullary sections of the duct, allowing urea to be reabsorbed into the inner medulla along the concentration gradient. This mechanism of urea recycling is essential for the maintenance of the medullary osmotic concentration gradient which is used to reclaim water from the tubule. More on this can be found in the chapters on renal handling of water,  renal handling of urea, and the countercurrent exchange/multiplier mechanisms.

The term "intercalated", meaning "shoved conspicuously in the middle of something else", describes these cells very well. They appear amid more normal-looking epithelia in the so-called "aldosterone sensitive tubule" segments (the distal D2 part of the convoluted tubule, the connecting tubule and the collecting duct).  They are clearly different morphologically to all the other cell types, and perform roles mainly related to the handling of ammonia, potassium and acid-base balance. For more detail, one could always read the review by Roy et al (2015), but a less interested person would probably be satisfied with the following stylised pictograph: 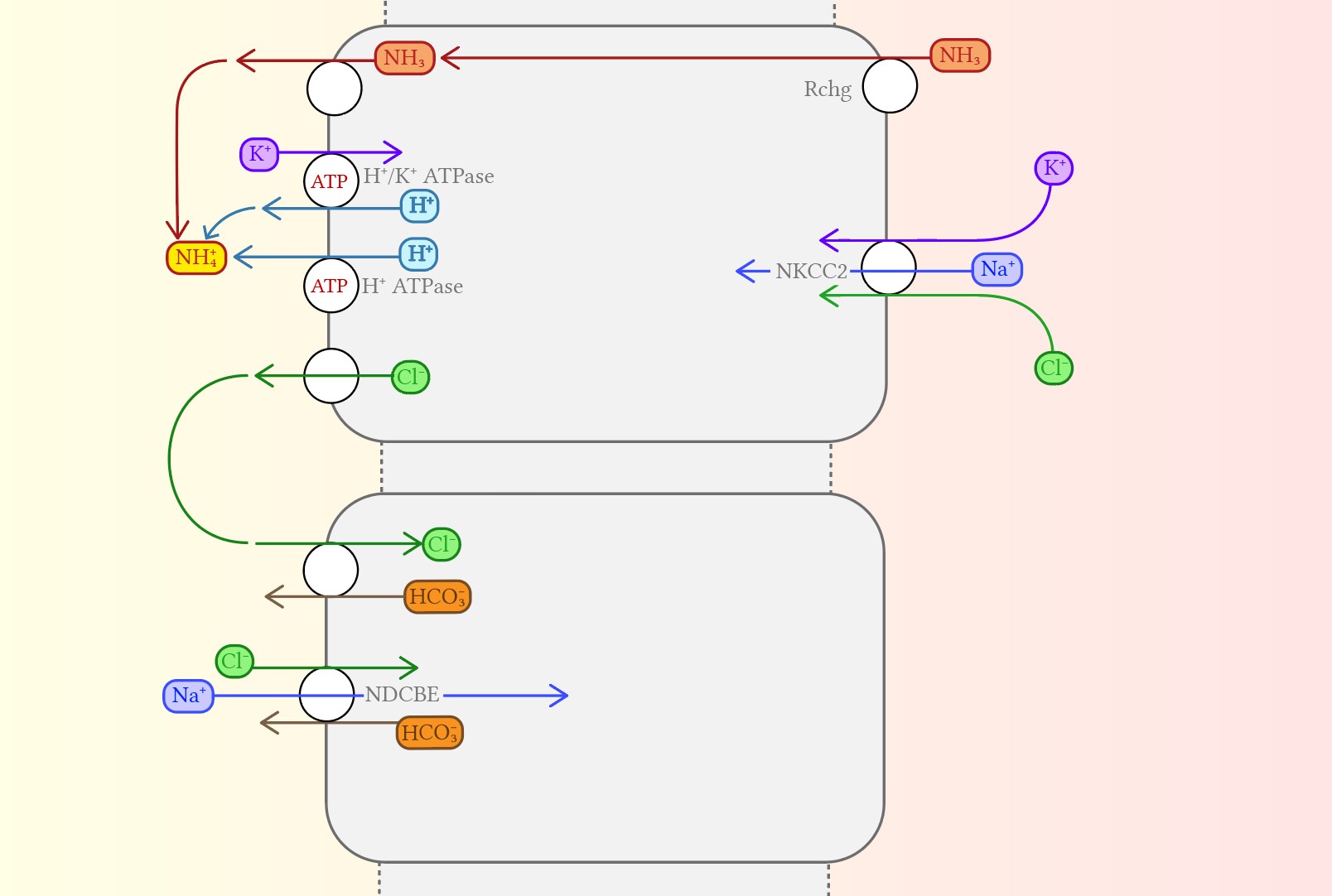 Or, in the form of words, the intercalated cells:

This acid-base function has importance in the pathogenesis of Type 1 (distal) tubular acidosis, where there is a problem with ATP-powered H+ secretion, normally an acidity-regulated process. As pH drops, so the activity of this protein should increase, thus increasing the capacity for tubular ammonium trapping and chloride excretion. In distal RTA (particularly the recessive variant) the activity of this protein can remain sluggish even at a low systemic pH.

Madsen et al - Anatomy of the Kidney; in: Brenner and Rector's The Kidney, 8th ed. (Chapter 2)

Kriz, Wilhelm, and Brigitte Kaissling. "Structural organization of the mammalian kidney." The kidney: physiology and pathophysiology 3 (1992): 587-654.