Distribution and regulation of calcium in the body fluids

This chapter is relevant to Section I3(ii) of the 2017 CICM Primary Syllabus, which expects the exam candidates to "describe the function, distribution, regulation and physiological importance of sodium, chloride potassium, magnesium, calcium and phosphate ions". It is difficult to know where to put this material, as it could just as easily be classified as endocrinology. Calcium the electrolyte has appeared multiple times in the past papers, and the questions have generally been asking about its distribution and regulation in the body fluids, but a lot of the answers depended on whether or not the candidates knew what the regulatory hormones did and where they came from.

If the time-rich reader wanted to lose a few hours, their tumble into the calcium rabbit-hole would likely begin with an article like Mundy & Guise's "Hormonal Control of Calcium Homeostasis" (1999). One would likely follow with Daniel Bickle's 2014 treatment of Vitamin D, a definitive resource that happens to be freely available online. Unhinged rambling about the hormonal control of plasma calcium can also be found in the endocrine section, but the curious reader is warned that it contains a non-zero amount of palaeontology, among other self-indulgent garbage.

Distribution of calcium in the body fluids

You have about 360mmol/kg of calcium in your body;  that makes about 25 moles of calcium. A 70kg male has about 25 moles of calcium, or about 1000g.  Of this, over 99% is locked up in bone. Some absolute minimum amount is present in cells, and about 20-30 mmol of calcium is in the extracellular fluid. The proportion of circulating calcium is slightly higher than what might be expected from the usual distribution of extracellular fluid, because it is bound to albumin, of which the interstitial compartment has less. Thus, in your 10 or so litres of extracellular fluid, you have about 10-15mmol of mainly ionised calcium, and then a further 7.5-10 mmol of calcium in the plasma of the blood.

In the circulation 40-45% of calcium circulates bound to albumin, 10-15% is bound to other anions such as lactate and phosphate, and 40-45 % is free and ionised, which is the only biologically useful form. 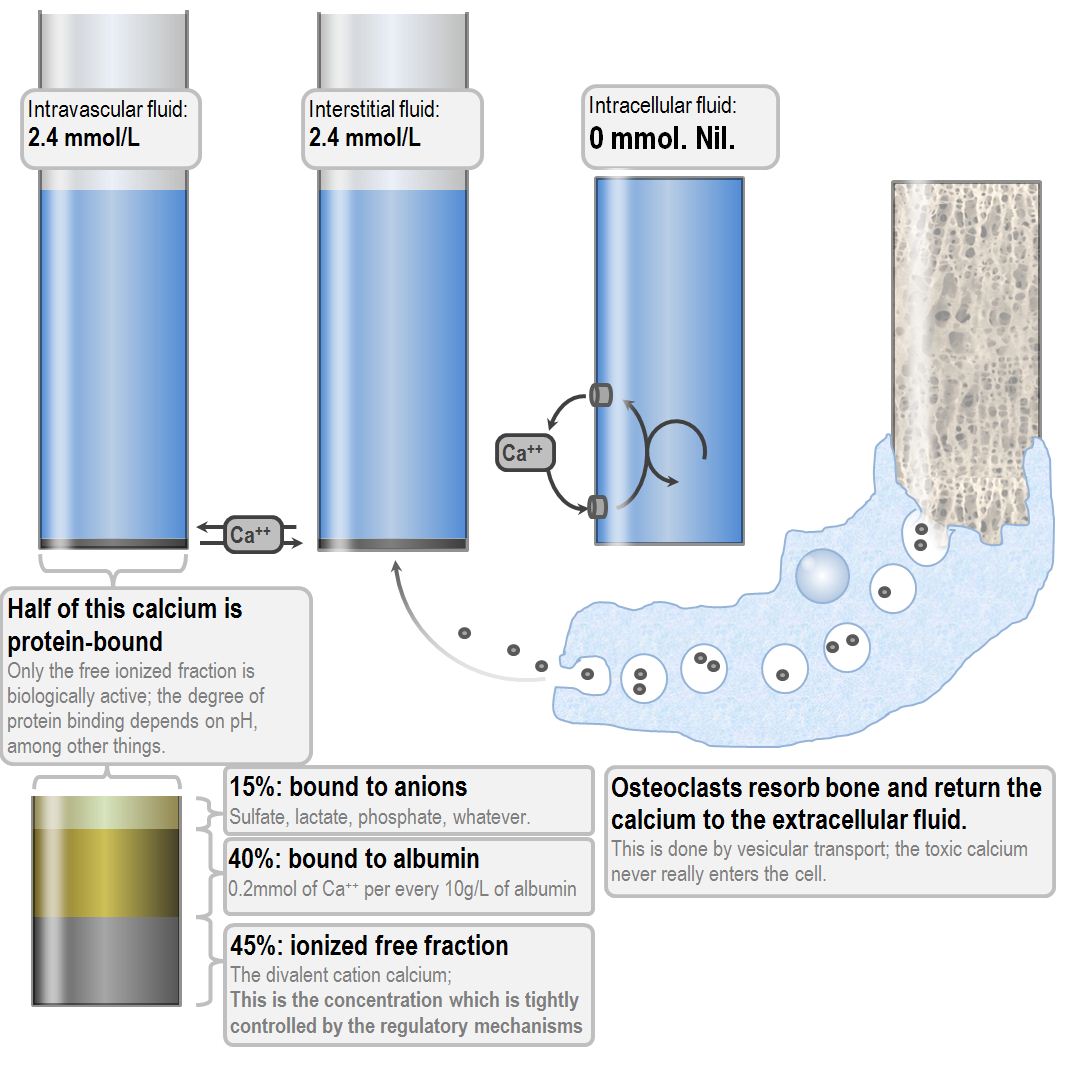 Most serious review literature on this subject starts with some kind of statement about how much calcium enters the adult human body, and how much leaves, and by which means it does so. Classically, this is represented in the form of a diagram where a length of bowel, a bone and a kidney are depicted as sources reservoirs and final destinations for calcium. Often, these diagrams are labelled Americanly, describing the flux of calcium in milligrams. In the Australian healthcare system, the ICU registrar and resident tasked with the duties of replacing calcium will usually do so by ordering calcium in millimoles, and so the author here takes liberties with some classical anatomy art to reframe calcium flux into this familiar metric scheme. 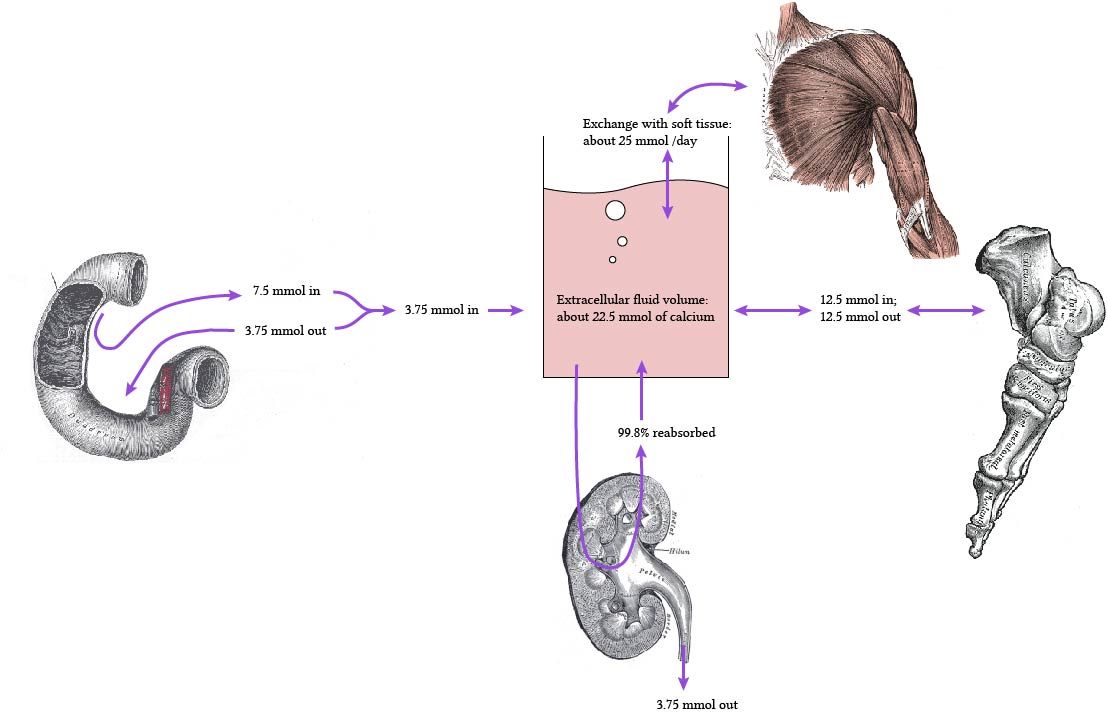 Unlike potassium and sodium, which enter the body uninvited and just lounge around until the kidneys eliminate them, calcium is a carefully selected guest. Calcium absorption takes place in the duodenum by some active transcellular process, and passively along the rest of the gut (Bronner, 2003).  Because the duodenum is a brief and unremarkable pitstop along a food boluses' tour of the bowel, the transcellular uptake only plays a major role when dietary calcium intake is very low; which in the ICU probably correlates with periods of prolonged fasting or ileus. When calcium uptake is high or normal, paracellular passive uptake accounts for the majority of the gastrointestinal absorption. In addition to unabsorbed dietary calcium, some additional calcium is excreted as part of digestive secretions and shed gut mucosa (Davies et al, 2004); some of this becomes trapped in the gut by binding to dietary phosphate to form an irreversible bond and an insoluble compound. The net absorbed calcium (about 3.75mmol/day) is matched by the daily renal excretion of calcium (again 3.75 mmol/day).

As you might have noticed, the pool of mobile calcium is small. The exchange of ionised calcium between the extracellular fluid, the soft tissue and the bone therefore has to be very finely controlled, as changes that might appear small will have a significant impact on the extracellular calcium concentration. Whenever you give somebody a 6.8 mmol ampoule of calcium chloride, you are essentially giving them two days worth of dietary calcium intake, rapidly increasing their total extracellular calcium content by one-third. Similarly, small changes in calcium binding to protein which make it more or less bioavailable can produce observable clinical change.

Factors which influence the binding of calcium to protein

This is a topic large enough for a whole chapter all to itself. In brief summary:

The paracellular diffusion of calcium is not something you can control. However the transcellular mechanism is tightly regulated. This mechanism has three steps:

Apparently, almost 90% of this occurs in the ileum, mainly because the residence of the intestinal content is longer. The following regulatory influences are involved:

Regulation of calcium exit and entry from bone

Bone represents a massive and essentially unavailable locked reservoir of mineral calcium, from which (and into which) there is a constant trickle of calcium exchange.  The job of controlling this calcium trickle is performed by osteoblasts and osteoclasts which form or destroy bone, respectively. Bruzzaniti & Baron (2006) do an excellent job of discussing the detail of this, so that we do not need to revisit it here. The most important examinable elements are the hormonal influences:

Question 7 from the first paper of 2008 asked the candidates to "outline the mechanism of action of bisphosphonates". These drugs are analogs of pyrophosphate, containing a carbon instead of an oxygen atom. Their main effects are described in more detail by Fleisch et al (2002) and Rogers et al (2020). In a form condensed for a short written exam answer:

Regulation of calcium elimination via the kidneys

The transcellular reabsorption in the distal convoluted tubule is where all the fine control of plasma calcium concentration occurs. Like with the intestinal absorption, there are the same three steps here:

The regulatory influences on renal reabsorption, from Jeon (2008), consist of:

It seems like a shame to waste the reader's time with something as pointless as the "physiological role" of an intrinsic building block of life. Unfortunately "the diverse roles of calcium" were 70% of the marks in Question 4 from the first paper of 2011.

On, Jason SW, Billy KC Chow, and Leo TO Lee. "Evolution of parathyroid hormone receptor family and their ligands in vertebrate." Frontiers in endocrinology 6 (2015): 28.

Rogers, Michael J., Jukka Mönkkönen, and Marcia A. Munoz. "Molecular mechanisms of action of bisphosphonates and new insights into their effects outside the skeleton." Bone 139 (2020): 115493.