Chloride seems to be the forgotten electrolyte. Nobody cares about it enough to write a physiology book chapter about its secret life. I, for one, would like to see this change. I only hope that one day somebody smarter than me will do it justice with an appropriate erudition.

It can be said that chloride stalks sodium. Where sodium goes, chloride follows. 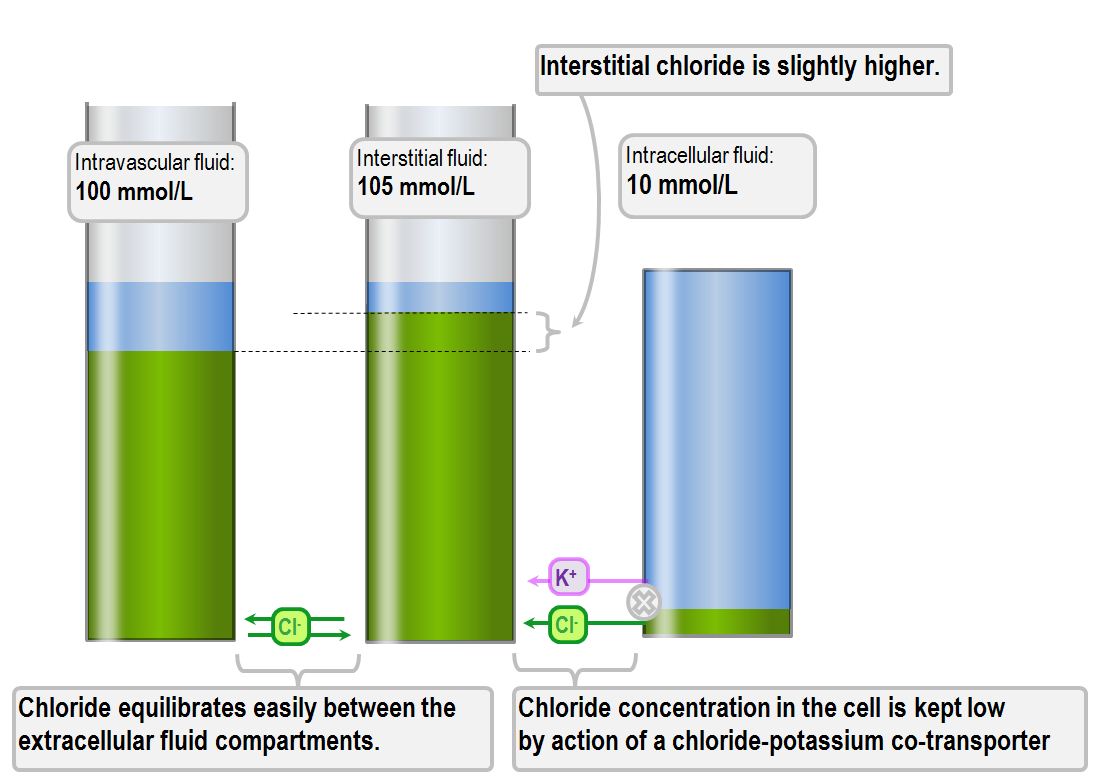 A Gibbs-Donnan effect forces some of it out of the intravascular compartment. Without this, there would be roughly equal concentrations of sodium and chloride: 145mmol each.  But: there is enough protein anionic charge in the plasma to repel a significant amount of chloride, and so at equilibrium an extra 5mmol/L or so of chloride hangs out in the interstitial compartment.

It makes up for the absence of anionic proteins in the interstitial fluid. Some electroneutrality is maintained by a raised chloride, and some by a slightly raised bicarbonate. Overall, there is little difference.

There are many of these, and some also co-transport sodium.

It seems most are powered by the concentration gradient of potassium, rather than by ATP.
Surely, sending one's potassium back out of the cell is bad? It doesn't belong out there... Well. There are massively powerful mechanisms in place maintaining the high intracellular concentration of potassium. The potassium extruded with the chloride is rapidly sucked back into the cell by the Na+/K+ ATPase, and the rate of its reuptake far exceeds the rate of chloride removal.

Again, this is one of those situations where the measurements of fluid compartment ion concentrations vary wildly from textbook to textbook. One simply chooses the most believable number. About 70% of carbon dioxide is converted into carbonic acid, of which the bicarbonate ion is the conjugate base. Bicarbonate is easily converted to CO2  which is highly lipid-soluble, and thus diffuses effortlessly in and out of cells.

Carbonic anhydrase does this reversibly, and at a ridiculous rate. It is probably the fastest-acting enzyme.

Bicarbonate itself finds it difficult to traverse the cell membrane, which to it is essentially impermeable.

Briefly, why all this interest in bicarbonate?

The bicarbonate anion (HCO3-) is a buffer anion, the conjugate anion of carbonic acid (H2CO3 ).

It combines with H+ to form H2CO3 when H+ is in excess, and it dissociates from H+ when H+ is in deficit.
(this is the process of buffering)

It is the H2CO3 form which is metabolized by carbonic anhydrase.
Thus, in the presence of large amounts of H+, lots of H2CO3 is available as a substrate for carbonic anhydrase and this lots of CO2 is formed, in order for you to exhale it.

Bone phosphate follows the same rules as calcium. It dissolves along with the rest of hydroxyapatite.

There really isn’t anything stopping it. It is strongly anionic, so there is slightly more in the interstitial fluid (as it is repelled by the anionic charge of plasma proteins)

Extracellular phosphate behaves in a manner similar to calcium. An authoritative paper by Baker and Worthley on calcium magnesium and phosphate metabolism reports that about 15% of it is bound to protein, another 53% free and ionised, and another 47% compelled with calcium and magnesium.

Phosphate is sucked into the cell by a sodium-phosphate co-transporter, which is more active in the presence of insulin. This process is powered by the awesomely powerful sodium concentration gradient. There are three types (inventively nominated as Type1, 2 and 3); the Type 3 co-transporter seems to be the ubiquitous one, which all of the human cells express. Like bicarbonate, this is one of those things that depends on the nuances of minute-to-minute metabolism. In a normal person, at any given time there may be very little lactate.

Given the below concentrations in mmol/L, and knowing the total body fluid volume of a random 70kg guy, you can estimate that he will have about 22.6 mmol of total extracellular lactate and another 34.5 mmol in his cells There isn’t enough of it to matter seriously in any of the Gibbs-Donnan effects, or to contribute significantly to the various osmolar forces. Like potassium, it merely exists.

Until your gut becomes ischaemic, and your serum lactate rises to over 20. At this grim stage there is a real and measurable osmolar contribution from the lactate.

Lactate has little trouble getting in and out of cells.

If one wishes to observe lactate more closely, one may visit my brief summary of lactic acidosis.

Another reference I used was this  eMedicine article.

Tsirigiotis D.N., "Insulin-Stimulated Phosphate Transport and ATP Synthesis in Skeletal Muscles" - Yale University School of Medicine 2006.   This guy from Yale wrote a beautiful thesis on this topic, to which I tip my hat. Yale are using it as their sample prospectus in physiology, for their postgrad program

Furthermore, see these  electrolyte discussions in the Electrolyte Quintet series from the Lancet..

For details on phosphorus, please see this beautiful article in the Lancet.

The bit about lactate permeability comes from Exercise Biochemistry by Mougios, or here in Google Books