By Alex Yartsev - Jun 30, 2015
Last updated Sun, 12/27/2020 - 06:51
Topic: Cardiovascular system
All SAQs related to this topic
All vivas related to this topic
This chapter has no relevance to any specific Section of the 2017 CICM Primary Syllabus, and is probably irrelevant to most (all) ICU trainees, as it describes a fragment of medical trivia which had minimal relevance even during the heyday of the Swan-Ganz catheter. A modern ICU trainee may never meet anybody who has ever measured this variable, let alone see this variable being measured.
In short, the pulmonary capillary hydrostatic pressure is the pressure inside pulmonary capillaries, which is slightly lower than PA diastolic pressure and which is slightly higher than the PAWP.  It can be measured by analysis of a transient pressure change which occurs after an acute PA occlusion. This capillary pressure supposedly has some clinical relevance, as it is thought to be the pressure which forces fluid out of the pulmonary capillaries into the interstitium, causing pulmonary oedema.
In summary:
The pulmonary capillary circulation, and the pressures therein, is discussed in the chapter on the physiological characteristics of pulmonary blood vessels. Here, the focus will be on the practicalities of measuring this variable, and the possible ways of interpreting it. The best published material on this seems to be the review by Jukka Takala (2003), followed by the paywalled Levy (1996). For most people, more than a couple of paragraphs will already be excessive, which means that the Pulmonary capillary pressure section from Robin et al (2006) will suffice.

Even though pulmonary artery occlusion pressure is not the same pressure as pulmonary capillary pressure, the capillary pressure can also be estimated from the shape of the pulmonary artery occlusion pressure trace.  In general some of the best images of this phenomenon and some of the most detailed discussion can be found in the freely available 2011 review by Juan Grignola, which was heavily strip-mined for its material. Without going into too much detail (that is covered in another chapter), it will suffice to say that the true pulmonary capillary pressure can be extrapolated from the fas and slow components of pressure decay, as the arterial pressure droops after a wedge occlusion. 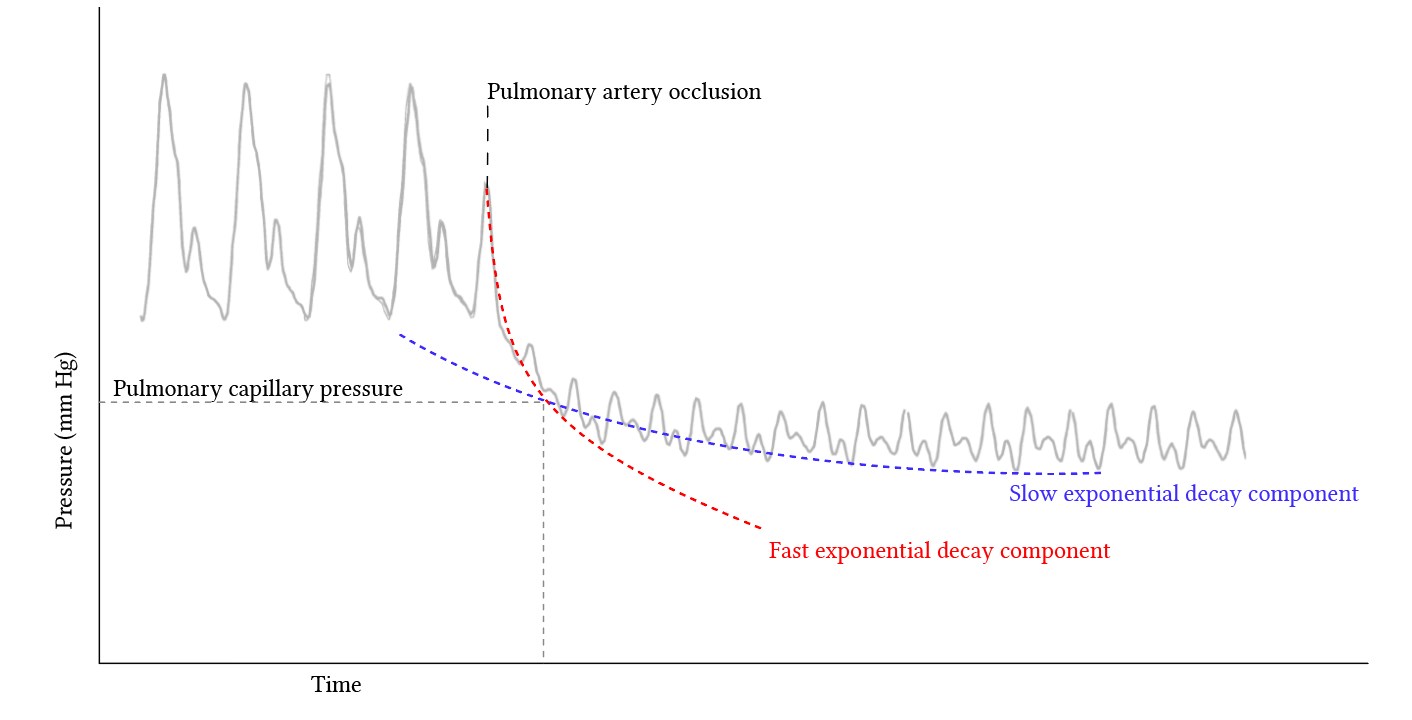 The pulmonary capillary pressure can, therefore, be determined from this graph by three main means:

As you can see, the visual method and the extrapolated curve method tend to give slightly different values: That Gaar equation is:

In other words, Gaar and co. determined that the capillary pressure was under most circumstances about 40% of the total fall from mean PA pressure down to left atrial pressure (which is your occlusion pressure):

Is this empirically derived shortcut accurate? Of course not. In fact, of these methods, none are particularly reliable, and so one must conclude the discussion of pulmonary capillary pressure with the statement that truly, the only thing we can safely say about it is that it is somewhere between pulmonary arterial diastolic and pulmonary venous pressure. In fact, generally speaking, in ICU capillary leakiness is rarely a purely hydrostatic thing. What of sepsis, DIC etc?...
In short, what you are measuring might be pulmonary capillary hydrostatic pressure, but it is not always going to be relevant to your decisionmaking.

So, how do you use this thing?

Let's assume that you have overcome all the practical and intellectual barriers, and somehow managed to measure a pressure which is the 100% accurate pulmonary capillary hydrostatic pressure. You now have in your hands a value which describes a major determinant of  fluid flux across the pulmonary capillary wall. Put in a different way, this is the pressure wot you oedem with.  In more formal explanations of this concepts, it is integrated into the Starling equation, like so:

So, basically, when one has a patient with pulmonary oedema, one may measure this variable, and - if it ends up being low - one should be able to say with some conviction that the oedema is clearly not the consequence of increased pulmonary capillary pressure, i.e. no cardiogenic cause, but some kind of capillary leakiness, as in ARDS.

Alternatively, one can observe a threshold value (individual for each patient) at which pulmonary oedema develops, and then resolve to limit one's fluid management below that threshold, i.e. serially measuring this parameter and witholding further fluid boluses if it is met or exceeded.